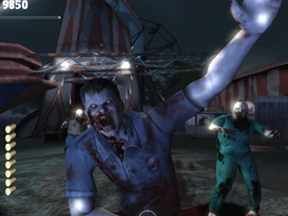 House of the Dead: Overkill

The House of the Dead franchise has been-for some indescribable reason that plays to the basic tastes of FPS gamers-a classic in its genre since the appearance of its first title. Even as the sequels became more and more terrible, people still continued to play them for no other reason than because of the title on the box.

Dead games, dead stories, dead graphics: House of the Dead is a true zombie, and like a true zombie, the masses can’t wait to engage it and start shooting.

Now, with that in mind, the developers at Headstrong Games approached the newest addition to the game’s lineage with the idea to make it the worst possible game that they could, and the effort has paid off on almost every front.

My God, if you had any respect for the intellectual advancement of gaming, by all means House of the Dead: Overkill should be on your most hated list, but just as the B-movies of the past filled some strange role in the movie-going public, this terrible game is destined to become another champion of the Wii console.

Though I could have done without the stupid opening that Headstrong chose for the title sequence, the following game and minigames were a blast to explore.

Blatantly ripping off Robert Rodriguez’s Grindhouse, Overkill amps up the cheese by giving us a newbie Agent G and his partner Detective Washington, a Louisiana public servant with revenge on his mind.

As the spoof guides you along (quite literally, as per HOD rail guiding tradition), you come across a stereotypically overblown horror experience complete with a ton of zombies to blast.

Beyond that, Overkill covers all the favorite locations of the horror genre in one game.

In much the same fashion, the game gives us stock villains along with banter and gags that never seem to get stale. Profanity is abundant in Overkill, but goes so far above and beyond what is necessary that the dialogue stops being offensive and just becomes comical on the lowest level.

The point in all this was to make a House of the Dead game that didn’t take itself seriously in the least, and admitted to being exactly what it was to begin with: A cheesy game for casual gamers to blast indiscriminately through, or a bit of fluff for experienced gamers to rush through (this given its short length).

Either way, Overkill is a win, albeit a clumsy one.

Of all these backwards compliments, I do have one clear criticism of the game, and that comes with the impact of a player’s bullet. Aside from a decapitation animation and a few dismemberments when blasting a zombie, all other impacts on your enemies seem to deliver little more than a bloodspot on their clothes.

With so many strides made in this game’s presentation, this one flaw stands out like a flashing buoy on calm waters.