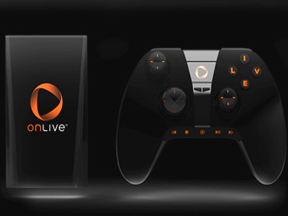 If you believe OnLive, then console and even PC gaming as we know it could be dead within a very short period of time. Then again, it could be just another pie-in-the-sky technology of the type that we have seen many times before in the industry. (Remember The Phantom anyone?) But whatever OnLive is or becomes, it was certainly the biggest news to come out of a somewhat scaled down GDC this week.

After seven years of stealth development, Steve Perlman, founder and CEO of OnLive, unveiled a promising new way of bringing gamers the titles and experiences they might have never dreamed possible through an online gaming site.

So here's his pitch:

"This is a way to revolutionize the way we think about games, the way that publishers develop games, and the way that consumers use games," said Perlman. "We think it's going to change things hugely eventually, and even in the short term very significantly."

What OnLive breaks down to is a "Games On Demand" system that can be accessed through PCs and Macs with the download of a simple plug-in, or through a television with the help of an OnLive mini-console, which is roughly the size of a pack of cigarettes. That essentially means that if OnLive works the way they say, you can play all your favorite PS3, Xbox 360, PC, Mac and Wii titles on your computer or your home television – without the console itself or even any beefy hardware.

Sound impossible? A demo of the technology was running at the show.

Located on the OnLive mini-console is an Ethernet port, an HDMI port, and an optical port. The front has two USB ports that can allow for keyboard and mouse control, or a wireless controller will be made available directly from OnLive.

OnLive has the potential, said Perlman, to eliminate the concept that you have to have a specific kind of device in order to play a certain kind of game, instantly making high end titles available through their service.

"Even if you only have an entry level PC, with no GPU, or an entry level Macintosh, with a little one megabyte plug-in for your browser-that's one megabyte, not one gigabyte-off you go. You can play the most advanced games there are," said Perlman.

With the system that Perlman and OnLive's Chief Operations Officer, Mike McGarvey, have introduced, no upgrades will need to be procured by online gamers using the service.

"I gave up PC gaming a long time ago. I couldn't keep up with the graphics cards or the complexities. Now, through OnLive, I'll be able to access the same rich world through a small browser plug-in," said McGarvey.

The interface displayed at during the GDC session was extremely user friendly, and with features such as video recording for bragging rights and unlimited viewing of any OnLive user. The options available were hard to shrug off as mediocre.

But how can they provide games over the internet seamlessly with no lag times?

"First of all, we have extremely high-performance servers. So the kind of servers that we're running are beyond what a totally tricked out PC would be in the home," said Perlman.

Called Interactive Video Compression, Perlman, who was also one of the head programmers of Quicktime, said that creating a new way of delivering interactive video was made easier because now they knew what they were working toward: Games. While Linear Media has too much lag and video games have a lot faster action than your traditional movie, OnLive has essentially developed a unique server that anticipates the movements of a gamer during gameplay and delivers that data via their system to the screen.

"What I love about the video game industry is that it's a blend of technology and art, but its also leading edge, always pushing the envelope," said Perlman.

OnLive is currently looking at a North American market for the launch, but will expand in time. Subscriptions for monthly access have yet to be calculated, and in fact, no pricing models were available at the show.

So is this the Death of Video Game Consoles? Have the Wii, PS3, and Xbox 360 witnessed the beginning of their demise?

With the ever popular growth of DLC making its way to XBL and PSN, it's only logical that an On Demand online game network would be made popular; however, to give over completely to this concept would mean for a lot of changes in the gaming world, not all of which would be good.

From a practical, main street point of view, if the entire experience of gaming went online, then say goodbye to the retail and production jobs that employ a number of different workers, not to mention the entire used games market. Cheaper games for those not wanting to splurge on new releases and trade-in policies that so many gamers take advantage of on a regular basis would be effectively lost on this system.

And while this proposed set up would be fantastic for game publishers, allowing them to have an estimated 30% cost taken out of their total distribution costs instead of the current 40%, cutting out the middle man will leave a lot of actual people, gamers included, tossed to the curb.

And while OnLive says they are providing a cross-platform experience with their service, they have only a total of 16 publishers that have agreed to contribute to their services, and odds are that publishers such as Sony, who thrive on their own consoles and hardware upgrades, aren't about to sign their souls away.

Another issue that will come up in time will be OnLive imitators. As this form of platforming becomes common, splinter upstarts (which will initially come from the Big Three in all probability) will cause these publishers to sign exclusivity options and all we'll have is another choice of (online) platform to pick from.

So it seems that all OnLive will have accomplished by the time they become mainstream is the potential power to become another heavy hitter in the gaming market, but with all their talk of digital revolution to the industry, the question begs to be asked: Is the next step in gaming sound and well-thought out?

We'll reserve judgment for the moment, though it is an intriguing concept, and really added some punch to an otherwise dull GDC.