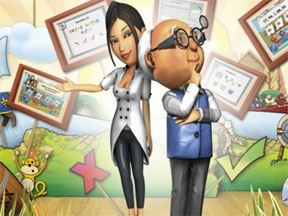 Find Out, And Get Better With IQ-Boosting Game

I have always been curious about how I stack up in terms intelligence (or lack thereof) against other people. So, in terms of that, I received the perfect game.

American Mensa Academy is like your gym coach in high school. He’s not very nice, but he pushes you to give a hundred and ten percent. I expected to breeze right through this, but unfortunately for my ego, AMA had other ideas. I got a cold dose of reality shoved in my face.

Instead of doing the training first, I decided to take the test and prove to myself that I was a smart cookie. Once I saw the first question, my confidence sunk like the Titanic.

Math has always been a weak point of mine and there are quite a few arithmetic-based questions here to try and tackle. No questions are really explained, and I have never seen some of them before, ever. Upon completion I scored a pitiful 83 and was slightly disappointed. I suppose that’s in the average range, but I thought I could do a lot better.

Then I did what I was supposed to do from the beginning and took to the training. I started out with language skills, because I really needed the boost in self confidence. The initial levels were easy up until you really played beat the clock. The questions got me reading faster and more accurately in a short span of time.

However, a little control issue was brought to my attention. Instead of being able to quickly tap the bottom screen on the 3DS, you had to drag the stylus across the screen to select things. Not only was this way slower, but the hand movement is really sluggish. In the end it turned out to be quicker using the directional pad.

After an hour of rigorous testing, I took the test again and jumped up to a 117. After that I turned my 3DS off to go work on the massive headache I had gotten from thinking too much.

After that I experimented some more. I turned on the 3D lever and was really unimpressed. In addition to this not being needed in the first place, it really sends the game into a tailspin. The graphics blur and in a test of reflexes any delay could be the difference between pass or fail .American Mensa continued the trend of me being unimpressed with the overall 3D experience offered by the system. And really, this is not a game where 3D is going to make a difference. I suppose if they created some type of special awareness puzzle that had to be looked at in 3D then it might be a little bit of a boon, but for the most part, just leave it turned off. The one bright spot in terms of 3D was the fact they had fully three-dimensional teachers. That was kind of fun and made me feel like being back in school again.

Audio was about what you would expect. Nothing really stood out to me, nor was it invisible. Besides, your mind is focused on other things rather than music. There is the theory that listening to classical music can boost your IQ, so it might have been neat to try that out.

Graphics were about average. There a few fun little things they did like make it feel like you walked from one area to the next. In the end though, there was nothing really eye catching. I didn’t really expect much given that the game is focused on testing. At least it wasn’t ugly.

Overall American Mensa Academy is a great brain exercise. Over time I did find that my IQ scores went up, not just the momentary boost I got from training, but overall performance after lots of repeated training went up as well. In a general sense, this would be a great title for someone with kids who wants to help them get a little bit smarter overall, or who wants to challenge themselves. The biggest problem with AMA is that it lacks the replay ability of a normal game. It’s also not really ‘fun’ in the traditional sense, but it does work, which is pretty cool.

I guess no one ever said getting smart was fun. American Mensa Academy earns 3 GiN Gems overall. So get out there and make yourselves smarter!