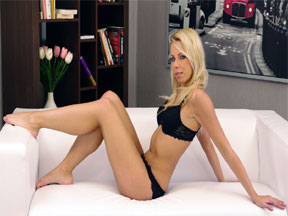 I have to admit that one of the first games I played on my IBM PC back in the 1980s was strip poker. My father actually brought it home from work and thought it would be a fun game. It was. And even though the girls were all comprised of four different colors of dots, it was an amazing experience.

Today, the girls are all real of course. I’m not sure my dad would bring the modern equivalent home from work, though Video Strip Poker Supreme is pretty tame as things go. Even so, if the ERSB were to rate the game, they would have to give it an M for nudity I’m sure. So it’s probably safe to say that only adults should buy this one.

Torquemada Games has really become the masters of this space. They have a pretty robust poker engine combined with some of the most beautiful girls in the world as opponents, which makes for a great combination. Every six months to a year they come out with a new opponents pack, which adds about five or six new girls to the mix. And this month they released opponent pack number ten, so you can do the math and figure out that they’ve been doing this successfully for a while, and with good reason.

Lets look at the straight poker interface for a moment, because even though the girls steal the show, if the game played badly then it would be all for nothing. But it plays quite well. This is not Texas Hold-em, but instead straight poker. There are no rivers or shared cards. You get five cards that are hidden and so does your opponent. Then there is a betting round. Once someone stops raising and calls, you both get to draw up to four cards. Then there is a final round of betting and the cards are revealed. If you or your opponent keep raising, the stakes can get pretty high, but will end immediately if someone calls or drops out of the game.

There are two types of decks to choose from. The default is a short deck where there are no low cards. It means that pairs are really common, as are three of a kinds and even flushes. I didn’t like this mode because it seemed a little fake to me. Instead, I went with a full 52-card deck, and this was much more like a real poker game where you can be sure that three of a kind is a strong hand for example, as opposed to the short deck where it’s very common. As a poker engine, the game is quite challenging.

With either type of deck, the game is not easy. If you are looking for nude pictures of pretty girls, there are easier ways to get them on the Internet. Getting a girl naked here requires a lot of thought and strategy. Different opponents also seem to have different styles. Some girls play real conservatively, and will drop if they think you have a good hand. Others are almost reckless, betting huge amounts on relatively weak hands, but can surprise you when you least expect it.

But that is one of the strengths of the game, getting to know your opponents. The girls here are not still pictures. A lot of video footage was filmed for each one. A single opponent is made up of over 300M of video files. The girls will laugh and pout at different points in the game, and are not above flirting with you or showing you a little skin to distract you from making a good call. Don’t laugh, this tactic worked more than once on me and after the game I was like, why the heck did I call that bet? Then I realized that the girl had briefly turned off the logic part of my brain.

Each game consists of five stages. Each girl starts out with $400 in cash, same as you. You need to win all of her money, whereupon she will pawn an item of clothing for another $400. If she wins enough money, she can buy her clothes back too, so it’s a struggle right until the end. If the girl is able to make you lose all of your money, the game will end. You can’t pawn your own shirt, which makes sense. Each girl owns four items of clothing. Once you have won all the clothes, you then play one final stage (unless the girl wins something back) and if you can bankrupt her then, she does a little sexy dance for you, a reward for being a great player.

It funny that even though the girls are basically just a series of video clips, that they seem very real. You even have the option to buy them a drink of white wine. It costs you $50 from your winnings, but you get an extra video clip and most girls thank you for doing so. And this may just be me, but most girls seemed a little more reckless after a few sips.

Looking specifically at opponents pack 10, wow, the girls are amazing. It seems like a few of them probably don’t speak good English and are instead saying things phonetically, but that’s part of their charm. I’m not sure where these girls come from. I guess they are Russian or from the Czech Republic, where the developers reside. I’m just going to assume there is an island of beautiful women somewhere, because the girls are pretty stunning and I’ve not seen too many like them around here.

Video Strip Poker Supreme and the new opponents pack does what it always has, provide a good poker experience with some of the most beautiful women in the world. It’s not too expensive, and there is a free demo with a single opponent if you want to try things out. Don’t think you won’t get hooked though. Also, I would highly recommend opponents pack 10. When you get it, say hello to Sunday and Katerina, but remember, I saw them first. Oh, and a version for the ladies is also available, with several hunky guys as opponents. As of this review, the male version of the game is free.

Video Strip Poker Supreme: Opponents Pack 10 earns 4.5 GiN Gems and is a great experience, if you are into that sort of thing, poker I mean.