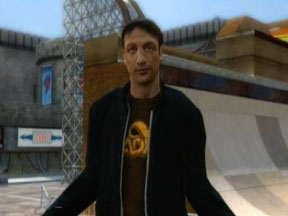 Editor’s Note: Brent Barbachem, GiN Skateboarding Consultant, contributed to this review, and those of us who are not so good on four wheels and a board thank him very much.

My first time playing this game, I did ok, but that is pretty easy when the guy on the screen is a good skateboarder by default. I am not a skateboarder; I do think I owned a hunter green skateboard in the early 80s, but I am moderately certain that I was never very good at it. And I have by no means kept up with the sport. So when it came time to review this title I invited a skate boarding consultant named Brent Barbachem over with the incentive that I would let him play my new PS3 for a couple hours if he was willing to give me his comments on this game. I have to say within about five seconds of putting a controller in Brent’s hand I knew that I was out classed, and that I had made the right call.

As he played Brent told me that this was the eight release in the Tony Hawks series from Neversoft and Activision, and that while this particular game was designed primarily for the next generation consoles it had the same feel as the previous games. However this particular game brings in a new feature where you can really control the placement of your feet called "Nail a Trick."

The back story for this title is that Tony Hawk is looking for the eight best amateur skaters and if you impress his team of pro skaters and win some competitions you can make your way up the rankings and become a member of the Project 8 team. Pretty much everything you do in the game will affect your ranking including completing goals, performing tasks, and finding hidden items.

New in Project 8 is the difficulty level is built into career mode, so if you complete a task ok you are an "Amateur," if you are really good then "Pro," and if you are perfect then "Sick." This most likely will result in you returning later in the game to complete the stuff that you only got amateur or pro on earlier in the game because your skater was not good enough. Also new is skill progression. For example you earn a stat point for say grind for a specific distance or for spinning 500 total times. Once you hit the first mark you can go for the second mark which is 1,000 total spins and so forth.

As I mentioned earlier, the big new thing in Project 8 is called Nail a Trick and it is where you can really control your foot work. The first time I did this, I had no idea what I was doing. The camera zooms in on your feet (which you can control with the two analog sticks) and you can not see what is going on, and I landed flat on my face resulting in another medical bill. I partially blame the fact that you can not see where you are in relation to the ground and other obstacles while zoomed in on your feet. All of this is powered by the Havok physics system, and if you are good, I am sure you can really do some great tricks with this. Brent said that he liked this, but said that he "is looking for a game with real skating moves, not the unrealistic moves" found in Project 8.

Brent and I did not run across any Spot challenges while we were trying out the game so I did not get his input on this, but discovered it later when I was making a fool of my self (thankfully alone). When you complete a spot challenge you get to tag (spay paint your mark) on where you set the record. I just found one when I was grinding (which is about the only thing I do well). They are pretty cool as apparently when you happen upon them they just work and no one has to tell you about them to make them happen.

The controls are easy to master and are extremely similar to previous Tony Hawk games. The one unique feature of the PS3 version of the game is the ability to control your character using the SIXAXIS control. You can balance, turn and perform tricks by turning and rotating the controller. I personally found it very slow and not as responsive as using the controls and gave up quickly. You can adjust the options to turn off this feature or to add in just balance with the controller or just turn.

The world is really cool and reminds me of a giant skate park with ramps and whatnot everywhere. Also it is a huge and expansive world similar to Oblivion (Xbox 360) without any level transition. Along with plenty of good skating music in the background. Your avatar in the world is customizable, but I was a little disappointed that the main customization is mainly limited to a few hair styles, clothing and your board.

Tony Hawk’s Project 8 introduces some new features to the series. Some of the features add to the series as a whole, for example the Nail a Trick is really cool and as it is further developed in the next game I am sure it will just get better. The same can not be said for using the SIXAXIS controller to move your character. While this feature was fun to play with, it was way to slow and hard to use to really add to the game.

Overall it’s a fun game and a must have for true fans of the series, but as a novice first timer to the series, I think I would pass on picking it up new at $60, when it will be on the used shelf for a lot less shortly. Once again, a special Thank You to Brent for coming over and showing me how to play and for inserting some good comments here and there.