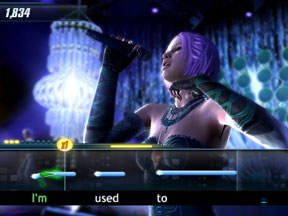 I think that everyone, on some level, loves to sing. Whether it’s humming along in the shower or in your car with your favorite band, we all love to do it. Shows like American Idol are evidence of that. People like singing, and good singers.

So its no surprise that there has been so many Karaoke games from Konami, and that they have all been pretty successful. There has been everything from country to pop to a simulated American Idol title within this series. Now we have Karaoke Revolution, which gets back to the basics of what most people like in a singing game.

Karaoke Revolution this time around features about fifty songs from a good mix of artists from today and yesteryear. Everything from ‘Gives You Hell’ by the All American Rejects to ‘Just Dance’ by Lady Gaga, ‘7 Things’ by Miley Cyrus and The Jackson 5’s ABC are found here. There’s plenty to love and hate for everyone to go around. The big difference here is that these are all master tracks without exception. I think most people believe that cover songs for games like this are yesterday’s news, and it’s nice to see that Konami understands that.

All of the songs sound fantastic, at least if you are just listening to the actual singer belt them out. But this is Karaoke after all, so everyone is gonna’ want to sing along. The game follows the same pattern as all the previous ones. The song plays and you try to match pitch with the singer. How close you are is represented by a little arrow on the screen compared to the song line. If you are above the line, you’re too high. If you are below, you need to raise the pitch. Thankfully the game records pitch and not just how well you mimic the main singer, so if it’s too high for you, you can drop it down an octave and still be fine. Just get the pitch right.

Like most music and rhythm games, this one comes with a party mode that features all the songs. I loaded it up at a recent get together and it was the star of the evening, with everyone crowded around trying to outdo each other. In addition to just being a Karaoke machine, you can also play cooperatively or even competitively against one another. Personally I don’t think this is quite as exciting as the American Idol games where you were really competing against other players and even the computer AI, but it does strip away any of the extra stuff in exchange for actual singing, which people seem to like.

This game is meant to be played with other people, but is also kind of fun when you are alone. In single player career mode, you create your singer and then pick gigs by moving a needle along a record player, stopping on and filling in different slices of a giant record like a jigsaw puzzle until you have a full one in front of you. Each puzzle piece represents different clubs or aspects of your career. Some may require that you sing a medley of songs, others want you to sing a single song, but the full version. Still others restrict songs to just country or just 80s music. A few require you to sing a specific song that the club picked. Although frustrating at first, this does expose you to other types of music than you probably normally listen to. I didn’t really know much about the group Death Cab For Cutie before I started playing, but found that I really liked their featured song.

As you get more proficient as a singer, you can change your character’s wardrobe. Not only can you change to, say a new jacket, but also the color of that jacket within a pretty wide range. I actually ended up really liking the way my singer looked in the end, though it took a lot of work. And there are some pretty nice outfits along the way you can pick up too, like the circus one from Britney Spears’ last tour, at least that’s what it looks like to me.

The various venues also change as you go along, and some of them look really amazing. Think about the coolest sets or the coolest club you have ever been in, and most of the places you perform look a lot like that. In many ways, they are cooler than most places in real life.

The addition of the master tracks really makes the game. It looks great and sounds amazing. At that recent party I mentioned earlier, a lot of people were just standing around gazing at the cool graphics on the HDTV, which looked great in 1080p. A few people never even sang a song the whole night, but had a good time watching others play the game. Bring this in for you next party and it’s sure to be a hit.

And if you were wondering, here are the songs in the game (all master tracks):

9. ‘Burning Down the House’ – Talking Heads

29. ‘My Life Would Suck Without You’ – Kelly Clarkson

41. ‘What Have I Done To Deserve This?’ – Pet Shop Boys & Dusty Springfield