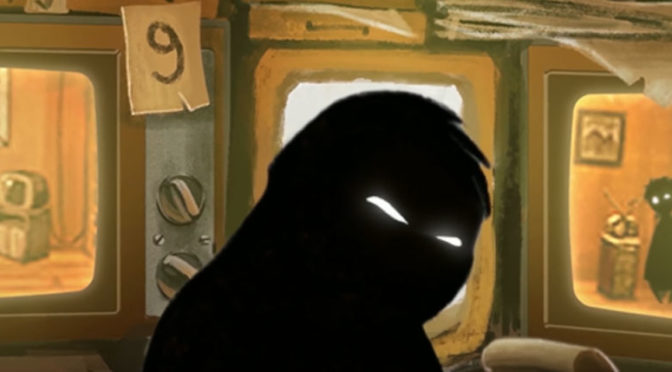 Every one of us, at one time or another, has wanted to be a spy. For me, I was inspired by early James Bond films and many of the gadgets used by Mr. Bond. This generation now has Beholder to help inspire them to spying, though this is no Bond film. Instead, Beholder offers a dystopian look at what happens when governments get too powerful and want to invade the private lives of their citizens. It’s perhaps a metaphor, or even a warning, about society today. Disclaimer: I do not advocate spying of any kind. If you want to legally spy, please join the CIA.

In Beholder, you are appointed to the position of being a state-inserted landlord tasked with spying and profiling every tenant living in a moderately-sized apartment complex. The building is a couple stories and you and your family live in the basement. Through your terminal in your office you are given assignments and notices. These notices alert you to any new laws such as “no alcohol” or “no foreign music.”

To accomplish your tasks, you are armed with a fleet of hidden cameras that allow you to gaze into all aspects of your tenant’s lives. Yes, you are the quintessential creepy landlord, but are appointed to your job by the state, so it’s cool and you are not creepy at all. Keep telling yourself that as you play.

Start your career as a snitch, spy and government agent with a copy of Beholder from Amazon.

While trying to ensure your building’s occupants are following the increasingly draconian laws by reporting deviant tenants, you must also care for your family. This includes trying to hunt down supplies from either the black market, or ironically, your deviant tenants. This forces quite a conundrum when the medicine you need to live, or a book your kid wants is in the hands of a lawbreaker. You either need to work something out with the tenant, perhaps forming a relationship with them in the process, or call in the government thugs to exact their form of brutal justice – meaning you won’t be able to retrieve the needed object either.

My experience was that these dilemmas will come quite frequently. At one point my son needed a book for school and my wife needed a doctor in the near future. A doctor was living on the second floor and had the book my son needed, but also enjoyed foreign literature which was against the law. Out of family preservation I looked the other way and never filed a report. The doctor treated my wife and lent my kid the books he needed.

But you can’t just be a nice guy either. The same regime that insists on knowing what “perversions” your tenants are up to, also are smart enough to realize that there will be deviants living in any building. So if the creepy, whoops I mean dedicated, landlord is not reporting them, then he is probably not doing his job. If you don’t report enough people, at some point the thugs are going to come for you and your family.

As I progressed through the game I started to take a moral inventory every time I filled out a profile for the government. I figured out how to report just enough people that I wouldn’t get arrested myself. At first I reported anybody and everyone for any wrong doing, no matter how minor. But then I started to feel bad that basically good people were getting hurt because they read a comic book or drank a shot after a long day at work. I started to look at my own moral code, and tried to only report people for serious offences, ones that I thought were actually bad, and not just because the government said so, though I also condemned people when I felt I needed to keep the heat off myself. A good game will change your outlook as it progresses, Beholder does just that, and makes a good moral statement at the same time.

Any good review will make comparisons about Beholder to Papers, Please, which is pretty much the mark when it comes to statement games. Beholder actually surpasses that one in a lot of ways. The world is much bigger here than just a border control booth. You get to know about the people who live in your building, and even perhaps conspire with them. The risk and rewards for your character are also less black and white. You don’t have a manual telling you exactly what to do here. Who is to say what choices are right and what are wrong in Beholder. Winning or losing may come down to your personal choices and moral code.

As a game, Beholder has good graphics and a unique artistic style that captures the dark tone of the game. I was also impressed with the audio to Beholder. The musical score was well composed and helps solidify the mood set by the art.

The story is well told and gives great insight into communists and totalitarian regimes, but also can act as a warning for democracies who suddenly find themselves with leaders who slowly try and curtail freedoms – a powerful message for our times. In addition, you really feel for the characters you are watching over, and it becomes harder and harder to abide by authority and report people. The overall fun factor on this game is unmatched as games of this type go. Beholder earns a very rare 5 GiN Gem score. Play it. Think about it. And be thankful that it’s just a game.