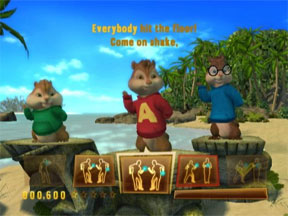 Alvin and the Chipmunks:
Chipwrecked

Movie tie-in games are notorious for being anywhere from mediocre to downright terrible. While Alvin and the Chipmunks: Chipwrecked will certainly not do anything to change the notion of all of these games being under par, it may offer fans of the Chipmunks a relatively fun experience with some catchy songs done up with the cute squeaky voices from the stars. However, trying to excavate anything more from this game will be an exercise in futility to the gamer.

When you first boot up Chipwrecked, you are informed that this is the "coolest game ever" by one of the chipmunks (they all sound the same). After that false, yet ironic piece of information, you are asked a series of questions to determine which of the critters you most resemble; questions like your gender, favorite color, favorite song, etc. Most are to the point, but a few of the questions are quite strange.

However, anyone who has seen any of the movies or watched the show know that the Chipmunks have vastly different personalities, so it helps that you aren’t merely asked run-of-mill questions. It is interesting to note, though, that no matter what the game picks for you, you can change your character at anytime at the customization menu, so all the question and answer seems a bit pointless; an attempt to tack on some depth to relatively shallow game.

You can choose from Story Mode, which allows you to play out the story of the movie…somewhat, Free Mode, which is just that, a mode where you can play any song you have unlocked so far with any character, and finally Co-op, which lets you and a friend team up and dance to songs as a team, pulling off cooperative moves and routines.

Whatever mode you choose, the whole point is to dance, so dance you will. Once the game begins, it is your duty to point the Wii remote in the correct direction as is shown at the bottom of the screen and continue to move with the beat. If you’ve played better games like Michael Jackson: The Experience, then this game shouldn’t give you any trouble on understanding the rules. The player, as the Chipmunks or the Chipettes, uses the Wii remote to "dance" to the beat of the music, moving the Wii remote into the desired position. A small picture will accompany the song indicating what exactly you are supposed to be doing. You will need to follow along with the beat and picture in order to get a good score. You are awarded stars based on your performance. Better means more stars, not so great means less stars.

The controls are, sadly, as you would probably expect from many Wii games. Most of the time you can get your movements to register, but other times the game will read something completely different. As a result, your score suffers. This can become very frustrating as too many mistakes can cost you quite a lot of points. The majority of the time there shouldn’t be much problem and you should be able to dance right alongside the Chipmunks.

It isn’t so much the controls, however, that hurt this game as the visuals. While the song and dance routine is happening, the characters are dancing right along with the beat. This looks so mechanical that it’s sad. There are no smooth transitions between their moves which causes them to look like robots most of the time. The fact that they don’t sing along doesn’t help this. You hear them singing in the background, but the avatars just stare blankly into the screen. Combine that with the fact that most times you just feel like you are waving the Wii remote around aimlessly, and this makes for a very unrewarding experience. The solos (where you literally swing the Wii remote randomly) exemplify this to an extreme. To say the least, this game’s routines have nowhere near the energy that the movies bring, which will disappoint fans looking for something similar to what they have seen in theaters.

The audio is by far the high point of this game. The Chipmunks sound just as good as they do in the movies and the songs picked will please young and old alike. Parents and children can both enjoy dancing to Elton John, Hootie and Blowfish, Michael Jackson, and bunch of other artists both new and classic. It’s just too bad the gameplay couldn’t be on par with the fantastic audio.

As mentioned above, the song list is quite extensive for such a game. It rings with more of a classic vibe then you might expect, with such artists like Michael Jackson, Elton John and the Beach Boys making up several of the tunes. Modern artists are here as well like tunes from Rascal Flatts, Smash Mouth, and more. Again, young and old will enjoy the track list, if nothing else.

The points you earn during the game can be used to purchase glasses, hats, clothes, "bling" (God help us), and other things to help trick out your Chipmunks as best you can. This does add a bit of customization and even a little ownership to the game. Your hard work burning up the dance floor pays off and lets you customize your character. However, the mechanical and robotic movements of the characters cannot be cured with any sort of hat or jacket you can purchase, so your character will always come off as dead inside.

Alvin and Chipmunks: Chipwrecked may be more fun using Kinect rather than the Wii’s motion controls, but nothing can save it from the lack of energy presented to the player. This game will probably please fans of the films if they can get past the static visuals that accompany the songs.