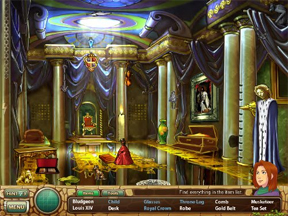 Samantha Swift and the
Hidden Roses of Athena

"Samantha Swift and the Hidden Roses of Athena" is one of a series of Samantha Swift games available from Mumbo Jumbo, self-proclaimed makers of "Premium casual games(tm)." Samantha is an archaeologist of the "Indiana Jones" or "National Treasure" variety, out accomplishing feats of semi-scholarly daring-do in familiarly-exotic locations, bringing objects of interest back to the "Museum of Secrets Lost." As Samantha, the player proceeds through a series of beautifully drawn two-dimensional screens with objects hidden around them, and a list of things to find and poke. Some of these finds are incidental (and in some cases, jarringly odd) and in others they are tools needed to solve other small puzzles or uncover other objects.

It is a brief game, and can be powered-through in a few hours by a casual puzzle gamer with a will to do so. The developers deserve credit for not artificially lengthening the play time with things that generally would have made it less fun, like a lack of hints to keep players stuck longer or more puzzles of uneven difficulty and quality. Samantha carries a scanner that will show you the silhouette of any object on your list, avoiding the "I spent twenty minutes looking for a ‘jug’ because I didn’t realize that it meant the amphora that’s clearly visible in the corner" problem as well as the "what the heck is a ‘nematode’ problem."

And if that’s not enough and you get bored of being stuck on an object, you can click the "hint" button and the game will show you exactly where an object is. In the PC version, you get a limited number of hints per scenario and can earn more by finding little lightening bolts in certain screens. In the DS version, the hint button just takes a little while to recharge.

Also helpful is that the game makes no bones (archaeology pun!) about telling you when there are things you need to solve a puzzle that you don’t presently have, or when it’s just not time to do something yet. Having suffered through countless pre-Internet puzzle games (does anyone remember the old Windham Classics "Alice in Wonderland"? No? Lucky.) that used non-intuitive inscrutability as if it were a feature rather than a flaw, I absolutely applaud Mumbo Jumbo’s approach to letting players customize the amount of frustration they care to tolerate as they play. It suits the light-adventure brazen-heroine feel of the game.

The overall game-play, though somewhat lacking in scope and replay value, maintains a remarkably even consistency of casual fun and doesn’t venture unwisely outside of its charming and entertaining formula. There are a large number of very different puzzles and activities, and the game-play caters to the hand-held touch-screen with several pseudo-tactile activities. It managed to keep me diverted as an adult, even though the tone and story seem to be more aimed at the aspiring-tween demographic.

The fun tactile interactivity advantage of the DS is offset a little by some of the trade-offs in the game’s superficial mechanics, and a few places where it’s not used to its full potential. To keep you from going blind trying to see details on the smaller screen, the game lets you zoom and scroll, which is good. But the zooming and scrolling are all achieved with stylus tapping, and the game can have trouble determining whether you meant to, say, tap an object or zoom out. This zoom feature can make navigating your museum more awkward than it needs to be. Also, the way you use tools, by dragging them from your inventory to the spot on the screen to use them, dampens the illusion on objects that you need to apply the tool to several times. So when you are required, for example, to whack a pinata until it gives you what it’s concealing, you don’t get to do that by selecting a tool and then tapping away at your target. Instead you have to repeatedly drag the little stick up the screen to hit the pinata, which gives the impression that your character is sadly out of shape.

Unlike the PC version, the DS splits the list of things you need to find in half, and you only work on one half at a time, meaning you have to find one half of the objects before you can begin looking for the other half. This is not especially frustrating, as getting stuck on single objects isn’t a big deal, but it does impact the flow a bit. Finally, in the PC version you need to select your tools and scan around the room with your pointer trying to find where to use them, which is an interesting puzzle/hunt in itself. In the hand-held version, the places that require tools are clearly marked and you just need to figure out which to use. I never got to test the iPad version, and I would expect it’s the platform that could best combine the good game play aspects of the other two, but I can’t say for sure whether that’s how it was implemented.

As it is brief, I was able to play it through several times to check its replay-value, which is higher than I anticipated but still not mind-blowing. Though the lists (and I believe locations) of the purely incidental objects can change from game to game, artifacts and tools are always the same. The cattle-chute plot and sequence of stages doesn’t change, and while there is a "find the right sequence" puzzle that changes, but the other puzzles do not.

The art and music are lovely, well-done without being over done. The backgrounds have a lot of richness and depth. The findable objects blend beautifully into the static backgrounds, making object-hunting a reasonable challenge, and giving the feeling of finding real little treasures. The music varies from location to location and the sound effects are pleasant…an important consideration when deciding if you want your kid to have a DS game for that long car ride. Overall, the look and sound of the game show a lot of excellent work and talent.

The dialog, on the other hand, is silent and mostly irrelevant to the game play, which is fortunate because there’s really not much to recommend it. The characters, though charmingly drawn, offer no surprises, and the things they say go back and forth between being utterly hackneyed and completely alien. Even without animation or speech simulation, you can kind of take it as a given that The Villain (and yes, the capitalization is warranted) says "muahaha" when he laughs and rubs his hands together in sinister glee. Similarly, Samantha and her friends are the good guys because…well, they just are, even if they occasionally loot furnished rooms of Buckingham Palace (complete with smashing things) or dynamite their way through a beautifully carved ancient stone in pursuit of artifacts for the museum. A museum which, by the end of the game, looks uncomfortable like a trophy room with no educational value or organizing principle other than aesthetics.

Being a fan of the not-exactly-archaeology adventure genre, I can turn off my brain and just enjoy the silliness…which is abundant and not obviously intentional. In fairness, the game does have some redeeming moments of much-more-like-archaeology activities, and at no point does Mumbo Jumbo make claims that they designed the game to be educational. But considering how much of a waste most of the dialog is otherwise, it’s hard to think that space couldn’t have been put to better use by adding a little substance. There’s some effort made at expressing the flavor of the places Sam visits in the art and objects and puzzles included, but unlike the game-play itself, the value of these is patchy and insufficient. But then that’s tipped in the title…it is Aphrodite and not Athena that the rose is sacred to, after all. But since they’re hidden roses, I guess it’s ok.

Samantha herself is a bit bizarre, both as a character and as the person presumably generating the lists of things to find, and while she’s not awful, she’s really not who I would choose to explore the world with. On the one hand, she’s brazen and daring and never demonstrates doubt or fear, making all the executive decisions for the team based on the research of her male helpers and occasionally coming to their rescue. She tackles puzzles and goons with equal alacrity, doesn’t mind getting her hands dirty, and I really, really want to like her. But she also says things like "that archaeologist poser" and "Get used to it, Ravena" that are the perfect combination of petty and uninspired to make her truly disappointing as a potential role-model for kids looking for their inner self-reliant leader.

At one point, she steals toilet paper from the bad guy’s camp and quips brilliantly "I hope they like using leaves." Because archaeology is really just like sleep-away camp, I guess.

Add to that the bizarre herpetology/entomology/botany/ fruit/thermos/hat obsession evident in some of the things you’re required to find, and one begins to wonder just what’s going on with this poor kid. Even with high stakes and bad guys immanent, she just can’t leave an area without taking just one more hat. I get that she’s quirky, but when the prize is as important as the game makes it out to be, I kinda wanna stage a hoarding intervention as our heroine spends twenty minutes trying to find six live chameleons to stuff into her knapsack. Again, it doesn’t interfere with the game’s playability, but at no point does the plot or main character especially enhance the game experience or encourage you to feel absorbed in the world or events. The ending is a literal deus ex machina, for crying out loud.

But all plot-snobbery aside, the underlying game is delightful and solid, and the aesthetic elements are genuinely impressive. The price on Mumbo Jumbo’s web site (free to try, $19.99 for the full download) is a little steep for a game with such a limited replay value and patchy plot, but I would still call it reasonable to consider picking up a Samantha Swift title as a diversion for long car trips…and maybe another for the way back.