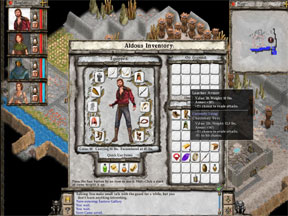 Avernum: Escape From the Pit

Avernum: Escape from the Pit isn’t exactly a whole new game. This is instead a remake of an older computer game simply titled Avernum. I never got a chance to lay my hands on the original Avernum (it came out in 2000, I was 10 for Pete’s sake) but I was excited to hear that it’s a romp into the classic era of computer RPG’s. Being that I grew up in the wrong era, I missed out on a lot of these awesome old titles (notice how much I’m emphasizing the old, lets count the grey hairs at GiN after this review) so it’s really cool when these remakes come out and I get a chance to experience all these worlds I missed out on.

Speaking of worlds, Avernum has plenty to offer. The underground world of Avernum is huge and is filled to the brim with quests. Heck I spent so much time running around I thought I’d never get around to actually reviewing this game.

To accompany the massive world that is Avernum we probably want an amazing story as well, right? Avernum delivers on this. The story of Avernum is one of the best I’ve played. Sure there isn’t any voice acting so you’ll be reading everything, but that’s just it, Avernum has such a solid story that it’s worth it. It isn’t often that I find a game (an indie one at that) with a story so great that the only thing I can think to compare it to would be my love for the story of the Black Mirror franchise (seriously if you’ve never checked out these games then you should).

Next up we have gameplay. The gameplay in Avernum is that of a turn based RPG. Move around via clicking and attack enemies in the same manner. I’m not going to say that Avernum has the deepest gameplay I’ve ever seen. Battles are as simple as ganging up on a single enemy until they are dead and then moving right to the next one.

That being said, the gameplay isn’t really bad either. Characters have lots of different skills that can be learned and putting stats into a character still has that satisfying feeling of watching damage and health grow that all RPG junkies love. Middle of the road gameplay isn’t a bad trade off though for an amazing story.

Let’s talk about the audio of Avernum. As I mentioned earlier there isn’t any voice acting in the game, which in this day and age earns Avernum a negative mark in the audio department. Luckily though the music in the game is good and sound effects pass standards. I’m not saying anyone will be rushing out to by the OST of Avernum, but at the same time it isn’t anything so bland as to warrant turning down the volume and blaring your own music through the speakers.

Now we get to the one truly bad part about Avernum, the graphics. The thing is Avernum isn’t exactly up to par with its graphics. Okay maybe if we were in the early 90’s I could see Avernum as a beautiful game, but the matter of fact is we aren’t. I’m not one to really care about the graphics of a game. Heck if I did I wouldn’t love retro gaming and indie titles as much as I do, or something like playing Da Vinci Diamonds online.

So for me Avernum is still a grade A game. In this era of HD graphics though, Avernum is left years behind. What I did was score the graphics pretty low, but NOT count that against it in terms of its overall score. I wanted players to know what they are getting into here: a great game that happens to have ten year old eye candy.

So what we actually have is the classic story of the ugly duckling. Sure it’s hideous on the outside, but it’s what’s on the inside that counts, yummy delicious duck’I mean a great story and overall good game.

Avernum: Escape From the Pit narrates itself to 4 GiN Gems out of 5!