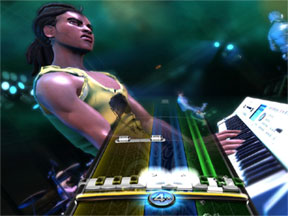 About a year prior to the release of Rock Band 3, both Kelly and I had a discussion on GamerGeeks, wondering just where the Rock Band franchise could go. After all, this was shortly after The Beatles: Rock Band came out and did an amazing job at recreating the history of the Fab Four. But when all was said and done, only one word came to mind about the future of the franchise…

As a veteran of many of Konami’s Bemani titles, I experienced music through DDR, Guitar Freaks, and Drummania. But there was another game (at the time) that I didn’t get the chance to play, called Keyboardmania. Eventually at MAGFest I played Keyboardmania, and even though the interface was very daunting for a newbie like myself, I thought to myself that it could easily be integrated in Rock Band 3, whenever that would occur.

Well now that time is finally here. Rock Band 3 is out, complete with the keyboard addition. And yes, it was well worth the wait to play. As Rock Band 2 just took the effort of fixing what was broke to an already excellent interface, Rock Band 3’s interface gets a major overhaul and does everything right to cater to their fans.

For starters, the music selection screen has received a makeover. While selecting songs the way they were before hasn’t been changed, more options are available. In addition to the standard quickplay selection, inside each song you have a choice to just practice the song (or even train for it under the Pro modes.) From each song you will be able to track your status on each instrument, both standard and Pro, compare your score with the leaderboards, find out the song length, the year of release (or re-release for some Greatest Hits collections,) and whether the song is family friendly or whether or not adult supervision is required. Even better, the interface can now be filtered for select instruments, thus not having to navigate through the "NO PART" songs.

And speaking of the new instruments. Rock Band 3 does feature the new keyboard controller. Available either for $80 separately or as a bundle set for $130 (currently only on 360 and Wii,) the keyboard adds a whole new experience to the game. In standard mode only five keys are used. Either the left most keys or five color coded keys in the board’s center can be used. But in the new Pro mode it takes advantage of the full 25-key set. While only 10 white keys can be displayed at once, at the higher Pro difficulties the keyboard track will actually slide to the other side to access the other keys. Thankfully a series of arrows will warn of an impending switch.

The keyboard itself is a high quality build, and I can see it taking a beating before it can suffer any significant damage. However, my biggest problem with the keyboard comes in the location of the effects slider and Overdrive button. They are both placed at the far left of the keyboard. Now while it would make sense for those who want to handle it like a keytar, playing it on a tabletop as I did makes activating Overdrive difficult while trying to maintain a combo. Hopefully an effector pedal will be available soon that will make activating Overdrive easier will come soon.

Keyboard based songs are limited for the time being only on the on-disc songs. However, both the standard mode guitar and bass notes can also be played by keyboard. It almost feels like the reverse of Guitar Hero’s piano on guitar modes.

The other major instrument overhaul comes in the form of the Pro guitar mode. Forget about having to deal with five fret buttons and the one strummer bar, as we are now dealing with using the full fretboard and an actual six string. I will admit that I was not able to test out the professional guitar mode at the time of this review but I will say the interface looks quite daunting. Thankfully a detailed training system will help making playing the new mode more accessible.

The problem with playing Pro Guitar is that it is another investment in itself, not just in the game itself, but in spending more green. The standard Rock Band guitars are not compatible with Pro mode, and thus, you will need to purchase either the new Fender Mustang hybrid guitar controller (valued at $150,) or if you’re more daring, the upcoming Fender Squier Stratocaster, a controller that will also function as a real guitar.

Vocals are again available as solo or the harmonies that were previously done in both Beatles: Rock Band and Green Day: Rock Band. To think, now with this, as well as the new keyboard addition, we now have the potential of up to seven people playing at once!

Career mode is also a whole new experience, replacing Tour Mode of the first two games. The new mode is more goals based, giving you a set of achievements to attain, rather than going from city to city to complete various setlists. (However, there are Road Challenges available both in Career and Quickplay mode that allow city to city setlists.) I am more in favor of this style of gameplay compared to the previous tours because eventually there were setlists that I didn’t want to play in Rock Band 2, and these achievements can be earned with whatever songs I want to play, when I want to play them. The number of goals is insane, not to mention what you have to do to earn them.

Of course The Endless Setlist makes its return, but that is nothing in comparison to earning the "Obsessive Compulsive" achievement, done by hitting EVERY note in Rock Band 3. Good luck doing that when playing Roundabout by Yes on Expert Pro Keys.

And then there’s the soundtrack. Oh yes, the excellent soundtrack. Considering the opening FMV features "Break on Through to the Other Side" by The Doors, we already know the soundtrack would be amazing. Eighty-three songs are available on the disc, and while there are the usual few that end up being live recordings or re-recordings, they all sound great, even those I hadn’t heard of before. But what gets me the most is that Harmonix actually read my wishlist on www.rockband.com because they included songs that were on it: China Grove by the Doobie Brothers, Walk of Life by Dire Straits, and of course, Bohemian Rhapsody by Queen, meant to be played on a KEYBOARD! Tracks from Rock Band 1 and 2, as well as Lego and Green Day Rock Band can be imported for a small fee, resulting in a library of well over 2,000 songs. Suddenly the filters in the music selection screen will be much more useful!

What can I say? Rock Band 1 was innovative, and Rock Band 2 fixed what wasn’t broke. But what did Rock Band 3 do? Simple, Harmonix blew it out of the water and bridged the gap between playing a game and learning to play a real instrument with the Pro modes. They improved the interface and continue to add songs to their ever growing library, and once again they make a game whose replay value will only increase exponentially. I dare want to think of what they will add next, because I know Alex Rigopulos and his HMX colleagues are probably reading my mind right now!

Pros: The formula that was perfected in Rock Band 2 gets a major overhaul, all for the better. Addition of keyboards. Up to 7 PLAYERS at once. One of the best collection of songs available in a disc package. Pro modes for all instruments (except vocals) add a whole new challenge, but Vocals retain the harmonies from Beatles and Green Day. New streamlined music selection screen makes accessing certain instrument based songs much easier.

Cons: Additional instruments can put a bigger dent in your wallet. The keyboard itself isn’t that bad at $80, but the Pro guitars will cost at least $150. Placement of overdrive button on the keyboard controller can be difficult to access unless played as a keytar.