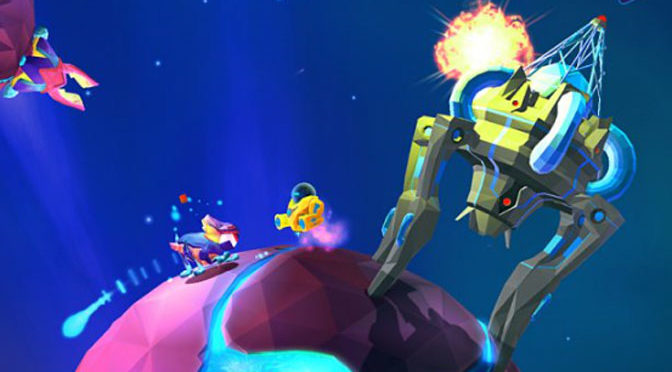 Robonauts is a 2.5D side-scrolling sci-fi run-and-gun by Qubic Games, available digitally on Nintendo Switch (the version reviewed here) and PS4. The player takes control of a titular Robonaut and is tasked with proceeding through twelve levels of increasingly intense alien blaster fire.

The story is light and entirely skippable. After a “WALL-E”-inspired opening cutscene in which a small, cutesy robot takes control of a larger and only slightly less cutesy combat mech, the player is dropped into the first of a series of levels constructed like miniature solar systems. The terrain consists primarily of broadly spherical planetoids and asteroids, and your Robonaut can circumnavigate them, held to the surface by each planetoid’s local gravity. At the beginning of each level, you are given a mission by a commander character who also serves as the game’s tutorial mechanism. The missions themselves, however, are simple in nature, and almost invariably boil down to travelling from planetoid to planetoid, clearing out the aliens or enemy devices you find there, and moving on to the next section.

Combat comprises the bulk of Robonauts’ content. The player character can run, jump, shoot, and leap between neighbouring planetoids in a manner vaguely reminiscent of the gravity-switching mechanics from the Super Mario Galaxy games. You can also bring up  “Tactic View”, which is basically just a pause screen with a map on it.You begin with two infinite-ammo default weapons – a primary short-range homing blaster and a secondary weak incendiary grenade, and can pick up weapon-powerups as you play. Each powerup replaces either your primary or secondary weapon, and will last either until you’ve burned through all the ammo, or until you touch another powerup, which will replace whatever you had in that slot.

This weapon system is one of the primary aspects in which the game fails to deliver on its potential. The two-weapon switchout system has been used to great effect in a variety of different types of shooter, from Halo to Call of Duty to Bastion, but here it’s pretty poorly implemented. All of the basic weapons feel very similar, and similarly underpowered. With the minor exception of the bazooka (and perhaps the shotgun at close range), enemies can absorb a lot of your fire, which can be frustrating when you pick up a new weapon, but then drain your entire ammo stock taking down one or two enemies. 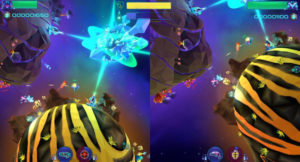 On top of that, the game frequently has you shooting high-HP enemy-spawning hive entities, and with no way to switch back to your default weapon you’re often forced to waste an entire weapon on a stationary bullet sponge. These limits, along with the general pea-shooter quality of each weapon, mean that there’s no opportunity to find synergies between primary and secondary weapon types.

There are no weapons that work particularly well together, or have effects that complement each other’s. You spend your whole time hoping for the shotgun or bazooka to drop, so that you can briefly dish out a more acceptable level of damage – and when they do drop, you have to take care not to accidentally touch another power-up and lose them again immediately. There are also very few weapons to choose from in the first place – I was surprised to see an achievement pop up to congratulate me on using all of the game’s weapons during the second non-tutorial level.

Mechanically, the combat is fairly simple. There’s no manual aiming in Robonauts – when you fire, the game auto-aims towards the closest enemy, and the non-grenade weapons have weakly homing projectiles. This means that the controls can be kept basic, and indeed the game can be played (relatively) comfortably on a single JoyCon. However, it also often leads to real frustration, with frequent instances of the gun locking on to the wrong enemy. A certain enemy type introduced mid-game attacks by hovering at long range, and then dive-bombing you when you get close. One of the more reliable ways to fight this enemy is to move away from the incoming attack and fire rapidly, giving you extra time to take it down before it hits – but if there are any other enemies nearby the gun will lock on to them instead, and you’re left helpless to avoid a severely damaging attack. 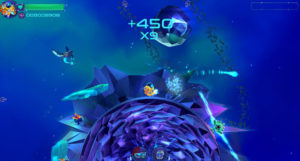 In fact, many of the later stages become exercises in frustration. A later enemy type attacks with a short-ranged, high-powered machine gun that essentially functions like a lightsaber, draining your health bar in seconds while you’re in contact with the beam of bullets. Without being able to find a vantage point from which you can manually aim down at these enemies, you’re often forced to attack head-on using a blaster that only has a range advantage of a couple of pixels. The game also loves to have them appear behind you while you’re retreating from other targets, killing you before you have time to react. These deaths often feel unavoidable, and not the player’s fault. And there are no in-level checkpoints, so death means you have to start the whole level over.

This isn’t so much of a bother the first couple of times, but on the fourth or fifth occasion when a long, difficult level run was scuppered right at the end by a surprise, out-of-nowhere robo-reaming, I began to feel that the game was not being particularly respectful of my time. By the eighth or ninth occasion, I was considering transferring the game files to my Switch’s microSD card just so I’d have something physical to yank out of the console and chuck into a fire. This tendency towards sudden-death attacks may be meant to encourage a thoughtful approach and more positional play, but I don’t get the impression that this the case given the quasi-random nature of enemy encounters. 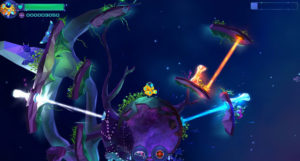 The gravity-switching mechanic is perhaps the closest thing Robonauts has to a unique selling point, so it’s a shame that it’s not really used to its full potential. Rather than using a physics system to simulate interacting gravity sources, like in, for example, Angry Birds: Space, the game seems only to simulate gravity for the planetoid you’re explicitly standing on, making combat between planetoids a strange and awkward affair. Your projectile weaponry will lock on to enemies on an adjacent planet, but a grenade thrown from one planet to the next will simply fall back to the planet from which it was thrown, even if it physically touches the adjacent one. The inter-planetary gaps are also often slightly longer than the effective range of your weapons, so when trying to kill enemies from a safe vantage point, you often end up having to fire from the apogee of repeated jumps, turning the combat into an ineffective, almost comical slapfight.

The game features two local multiplayer modes – co-operative and competitive. The co-op campaign is essentially just the single-player campaign with two player characters. It works fine, and the Switch hardware makes it easy to pop out both JoyCon and use one each. It also makes the campaign significantly easier, as not only do you have double the firepower with no corresponding increase in enemy difficulty, but one player can revive the other when they die. However, the revival feature is a little inconsistent and buggy – we repeatedly encountered a situation in which one player would die, then be revived, and then the other player would die. This would often lead to an instant game over, even though the first player was alive and shooting. However, that aside, I found the co-op campaign the most fun way to play the game, and it does allow you to use the “Tactic View” for actual tactics, even if those tactics are limited to “let’s split up and hope not to die.” 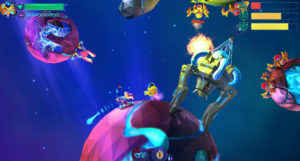 The competitive multiplayer mode is less interesting. There’s no direct competition – the game is still PvE rather than PvP. You both spawn on the same large planet, and each player is given a selection of tasks, generally of the form “Kill [amount] of [enemy type] with [weapon].” The first player to complete enough tasks to pass a points threshold wins the match. We played a couple of rounds of this, but it didn’t hold our interest very long – there being no actual interaction between the two players, it didn’t feel particularly competitive and there was no space for interesting things to happen…

The synthy soundtrack is functional enough and fits the world, but it’s not outstanding and after a while I wanted to turn it off and listen to something else while I played. The sound effects, in comparison, I had to turn off way sooner. The constant laser and robot noises become very grating, very quickly, and it’s not really helped by how low-quality they are – crackly, poppy, low-bitrate samples that would sound more at home on an N64 than on a current-gen console. The voice samples also sound very low-fidelity and highly compressed. 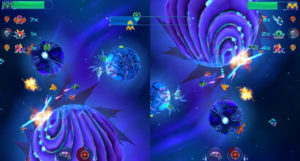 Graphics-wise, Robonauts looks fine – no better or worse than you’d expect for a budget title of this scale. It has a relatively cohesive style with lots of flashy bright neons, lasers, and swirly-thing space effects. It looked fine on a big TV, but a little grainy and aliased on the smaller Switch screen. It also suffered from crowding on the smaller screen – the camera is far back enough that on the small 720p display it could be difficult to properly identify what was going on around the character.

Performance was a mixed bag on both the docked and undocked Switch. Early on the game ran smoothly enough, if not butter-smooth – it maintained a reasonable speed of around 30FPS, but in later, more complex levels things did start to get a bit sluggish in both modes, with framerate drops, slowdown and, in the co-op campaign, noticeable input lag.

Overall it’s difficult to recommend Robonauts at the price point ($14.99 in the US, £13.49 in the UK). The first few levels of it are a fun if simple little diversion, but it soon becomes apparent that there’s very little to keep you playing – no rewards for your effort, no upgrades to be earned, nothing to be unlocked. The game simply puts everything on the table at the beginning, then slowly tightens the thumbscrews by heaping more and more enemies on you. It’s certainly a challenge, but an unrewarding one, and once you’re done with the game’s twelve levels and two difficulties, there’s nothing at all to bring you back.