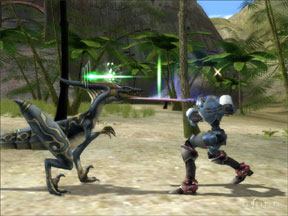 Rising Force Online, otherwise known as RF Online, recently entered the US market. For over a year this game has enjoyed success in Asia, with tremendous success in developer CCR’s home country of Korea. Recent reports claim the game has over a million active subscriptions within that country alone. Publisher Codemasters looking to add a MMORPG to their growing library of games got wind of how profitable this game has been and exclusively licensed it for the US and Europe markets.

It’s fairly easy to see why such a game would be a huge hit in Asia. Below the skin of this futuristic fantasy beats the heart of a savage Player Versus Player (PVP) game akin to Diablo and StarCraft. Unlike other games in the MMORPG genre that merely add PVP as a feature; RF Online goes above and beyond by making PVP a focal point of play. This is CCR’s love letter to those that crave PVP-centric games.

There are three playable races otherwise known as factions: the nomadic Bellato Union (masters of mechanics), the mythic Cora Alliance (masters of magics), and the cybernetic Accretia Empire. All factions share the same classes: Warrior, Ranger, a crafting class called Specialist, and the mage-like Spiritualist (though not available to Accretia since machines in the RFO universe do not use magic).

Each faction also has unique abilities. For example Bellatos can create and pilot large mech-like machines called Maus. The Accretia is the only race that can equip and use rocket launchers, while the Cora has the ability to summon spiritual gods called Animus.

Every eight hours, three times a day, a chip for your faction is created. The goal of the other Factions is to steal your faction’s chip (dubbed the Chip Wars). Whichever faction is declared the victor is given permission to mine the central mines (otherwise known as the Core). This place is off limits to other factions during this time; entering is a death sentence. Besidse the Chip Wars there are of course the usual HQ faction skirmishes within the PVP maps.

Mining is a significant aspect of gameplay. Specialists use the ore to craft weapons, armor, and items, as well as offensive and defensive items. If you are fortunate enough there’s a rare, highly desired ore call a Talic used to upgrade weapons and armor (similar to the slot system in Diablo 2).

Because of the supply and demand nature of ore casual mining outside the Core is open to all factions and serves as an excellent way to make income. Except for scheduled downtimes the game doesn’t kick you off for idling. You are free to park your character at a mining site all day with a caveat that you are in PVP territory and can be killed at anytime.

Basically at level one all you need to do is visit your local Ore vendor and purchase an ore miner and battery for around 15,000 (a sum that is easy to acquire from killing NPC mobs). Batteries yield more or less ore depending on size. A large battery for example nets 91 ore (known in game as a stack). If you own many batteries the miner will automatically use the next available.

There are five types of ore available: blue, red, green, black, and yellow and qualities grade from low to high. Each color yields a different object type. For example blues crafts staves and weaponry, reds produce firearms, greens generate bows, blacks handle melee, and yellows produces shields. Like any economy ore prices fluctuate on a whim, however on average high quality from any color can bring in 100k per stack.

Graphics is an interesting mix between eye candy and lackluster. Big epic PVP battles, where dozens of Spiritualists and Accretia rocket launches exchange fire, are spectacular. Yet all of this takes place on a landscape that is lackluster at best. The ground doesn’t look organic; your mind tells you it is grass but it doesn’t look like it. In other comparable games land shapes nicely. Instead of nice subtle curves indicating a cliff or edge land does awkward 25-, 45-, 85-, and 90-degree angles.

Lacking is a full array of trees, plants, towns, and details that make this game feel empty at times. It feels like the factions just moved into an apartment and are waiting for the furniture to arrive.

The entire game takes place within individual, all encompassing maps. Each faction has its own base map that only faction members can enter. The remaining Sette Desert, Haram Stockade, Numerus Stockade, and Crag Mine Field (where the Core is located) are PVP maps open to any faction. Up until level 24 low-level characters use their faction’s base map. Beyond 24 a player transitions over to the PVP maps.

Leveling happens very quickly for the first 20 levels. It’s not uncommon to reach level 11 after the first night of casual play. There are quests that guide you to mobs that optimize experience so that leveling happens quickly. However RF Online’s detriment is that after 24 levels the quests begin to slow down and the reality of achieving the next level becomes a tedious chore.

I’ve not given up on RF Online just yet. From the battles and general PVP side of the game I’ve had a chance to participate in it looks on par with the PVP fun of World of Warcraft, City of Heroes/Villains, or even Dark Age of Camelot. On that aspect alone I will continue to play. Unfortunately, for a $50 game plus the $15 per month fee, I’m putting RF Online on notice that if the boring grinding aspect doesn’t ease up soon then I’ll probably not continue. To me paying $15 a month to kill a "Robust Lava" for the umpteenth time isn’t fun. What I want is for CCR to give me PVP, please!

Truth is I do realize that fun within MMORPGs is defined differently per player. The bottom line is if your play style is one where you love to constantly kill mobs over and over again with an end-game reward of PVP, then you will likely enjoy the game. However, if you are in no way remotely interested in player versus player action then I recommend passing on this one" because the Player versus Monster side will bore you.