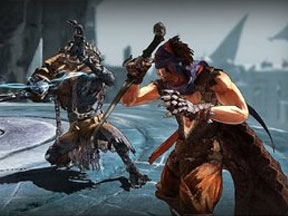 The concept of a sandbox Prince of Persia game, I have to say, got my excitement level up to a nine out of ten. I remembered playing the first in the Sands of Time trilogy and thinking it was a great attempt at furthering acrobatics in the gaming world, and I hoped that that level of innovation would bleed into the future titles. Were these expectations met? Well, yes and no.

The new generation of Prince of Persia games resets the series in a wonderful way. The graphics for this new title are divorced from former titles bearing the POP brand, but they do well to keep a fantastic air of freshness to the series.

In POP, you are the unnamed wanderer who has lost his donkey. Traveling through the stormy desert, you come across a woman who is running away from guards, and with both her beauty and your own curiosity to fuel him, the prince takes off after her, bonding himself to this strange girl and her strange predicament. It doesn’t take too long before you realize that the strange woman is, in fact, the princess of this land, and that not only is she easy on the eyes, but she also has this uncanny ability to keep you from dying at every turn.

So begins the new attempt at POP. Here we have a dark god who is fighting to escape his 1,000 year captivity and a forsaken kingdom that now harbors all sorts of nasty villains.

The openness of this world is fairly debatable, since even with your movability, you are stuck primarily to what breaks down to a wide set of tracks that allow for only slight path variations.

This was one of the ways POP over-hyped itself. When hearing the phrase "open world," my mind tends to jump quickly to the chance to interact with a given world on a number of different levels. Given POP’s past accomplishments in acrobatics, I expected this game to deliver a more fluid and varied sense of style and control, but the truth is that the character is as hindered as his Sands of Time counterpart ever was.

While the different acrobatic stunts and fighting combos are pretty, there is hardly ever any room for variation once you get down all the base moves. And the boss fights get tedious by the second time you take on any given arch-villain (you have to fight each of the four a total of five times), especially when you only have a limited number variation of fighting maneuvers to choose from.

Had the people pushing the game numbed down their PR attempts at getting eyes on the game, I might have been able to swallow these lacking options a little easier, but as it stands, I don’t feel that POP has lived up to what it promised.

One thing that the game developers got right was the interaction with the games heroin, Elika.

Let’s start off by saying that I was supremely bummed at the thought of not having the reversing effect made popular by previous POP games; however, I was eager to see how they could top this feature in the new title, and here I wasn’t disappointed in the least.

Elika is a perfect component to the Prince’s travels through this new land. In a story sense, the banter that happens between the two of them throughout the game is fantastic, and in a gaming sense, her presence is both rewarding and helpful.

In such a fast paced game of physical movement, one of my largest worries was that Elika would be the subject of much frustration, mainly by slamming into the main character during an all important stretch of acrobatics; however, the opposite is true. Without Elika, the Prince couldn’t pull off half his moves, and when the odd occasion happens that she is in the way, the problem is quickly remedied through the use of her magic.

With all of these pluses and minuses to consider, POP is going to have varying acceptance rates on an individual gamer basis, which will make it difficult to say whether it was a success or not. For me, I’m glad to see that the franchise is getting some fresh ideas out to the public, but know that next time, I’ll be keeping my expectations lower than I did this time around, assuming that the game delivered will be a solid one and not a title to break through completely new ground.