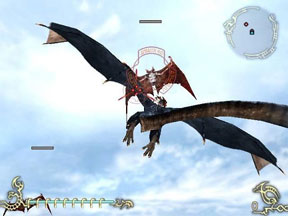 When the original Drakengard came out it created quite a stir. The ability to fly on the back of a dragon, using your beast’s abilities to turn the tide of a humongous battle going on below you certainly will make you feel powerful. And when combined with a ground combat interface, it was almost like getting two games in one.

Drakengard 2 continues this tradition with a more streamlined interface and at least 30 hours of gameplay in the main campaign. In fact, once you solve the game you find out that this is only the first of three possible endings, and to see the other two you need to go through the game two more times. Which if you like the gameplay is not a bad thing, but if you find the constant hack and slash repetitive then it will be like getting sentenced to more purgatory.

You play Nowe, a young man raised by a dragon. As such, you can speak to both dragons and humans. Set 18 years after the original game, Nowe has come to serve with the Knights of the Seal, guarding five magic seals that keep an evil dragon locked away. He is a good fighter on the ground, and a true terror in the air when riding the blue dragon Legna, who acts as the boy’s father.

Let’s start with the good things about the game. The interface when you are riding over a battle with your dragon is awesome. Down below you can see the hit point bars of both friendly troops and enemies by the hundreds. If you zoom down close you can actually see them hacking at one another. Who knows who will win the chaotic melee?

Taking matters into your own hands, you get to show your opponents what air superiority means. Shooting targeted fireballs and using massive wing buffeting attacks, you actually turn the tide of most battles.

But you won’t always be in the air. Sometimes monsters hide in caves and a few bad guys are immune to your dragon fire. At times like these you have to dismount and take matters into your own hands.

With one button, you can dismount Legna and swordfight toe to toe with the enemy hoards, upgrading your personal powers and finding new weapons. Some indoor levels are fought completely on foot since your dragon can’t fit inside them. When pressed you can, if you are outside, remount your dragon and take to skies again. The transition between the two game modes is seamless.

On the ground you can sometimes switch between characters if they have joined up with you. Like the transition between the ground and the sky, it’s very seamless. You simply select a weapon from your quick inventory wheel, and the correct character who wields it will appear and the current character will go away. There are four playable characters, though only Nowe can ride the dragon.

The plot of the game is also surprisingly pretty good. Eventually you realize that the Seal Knights are not the good guys you thought they were, and you will have to undo some of the things you did previously to atone, which means more massive battles but from the other side. Actually it does not take you long at all to find out who the real bad guys in the game are. You are kind of beaten over the head with this fact right in your first mission, though it takes you a while to rebel after that and switch sides.

Ok, now for the bad parts. The biggest complaint most people will probably have is that the battles are repetitive. The armies you fight offer little or no challenge. When on the back of your dragon, they mostly run around trying not to get hit by your terrible death from above. On the ground they are not much better. You will rack up kills so fast you might wear out your belt putting all those notches in it. Getting over 200 kills per mission is about the norm. There are a few monsters that do pose a challenge, huge brutes that are annoyingly immune to dragon fireballs, that must be faced toe to toe. Mostly the secret to these guys is to sidestep and hit them from behind or the side, but at least they are a bit of a challenge.

Air battles where you are fighting other flying creatures are worse. Some creatures are as challenging as flying blocks that sit around waiting to be shot down by your dragon, occasionally firing a shot in return but mostly just being a target. Once in a while you get to fight a huge airship which is truly epic and fun to battle. But the game follows this up by more airships, and the repetitive nature of the title comes back at you once again.

Also, the graphics have not changed from the first title as far as I can tell. They are passable, but considering I have seen some really innovative things on the PS2 recently, you would think they could at least have given Drakengard 2 a new coat of paint or something.