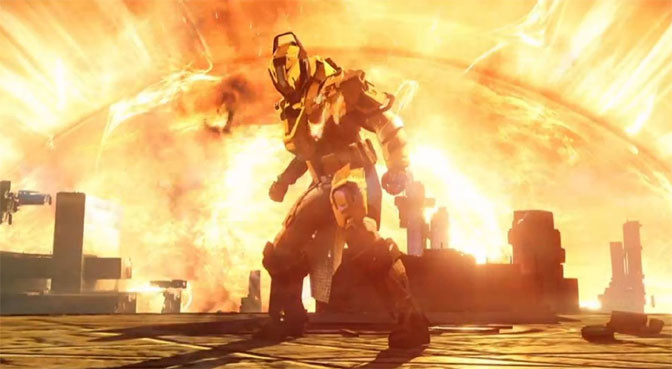 I stopped playing Destiny back in February of this year for many reasons I’ve talked about before in quite a few of my blogs over the past few months. Chief among them, I was sick of the bugs, lack of player consideration and poor development choices regarding nearly every aspect of the game. So when GiN got a review copy of Destiny: The Taken King, and asked me to take a look, I went into the game again with a more wary mind than I did last year.

That said, the new missions are massively fun and I actually enjoyed the hell out of all of them. They were difficult without being punishing, and were relatively free of bugs. I say relatively because any time you went through an older area you were liable to experience one. Not only were they fun to play, but the story was actually good. They took characters like Cayde-6 (voiced by the always excellent Nathan Fillion) and made him into the most badass character in the entire game. He pretty much made me enjoy the missions, even though they were mostly more of the old formula.

Having actual chatter over the com channels during missions was pleasant and it was nice to hear someone other than Ghost (now voiced by Nolan North of Uncharted’s Nathan Drake Fame). Speaking of Ghost, he’s actually fun to listen to now. Peter Dinklage’s voice wasn’t fun and even though his most memorable line of “We’ve woken the Hive!” was the only decent line Dinklage ever did. Amusingly, that particular line is one of North’s least well done ones.

Regarding the new Patrol, read exploration, it’s an explorers dream and a navigator’s nightmare. It’s got so many twists and nooks and crannies that I fully expect to have to just run around it for a day or two’s worth of time to actually explore everything and memorize it all. There are so many new collectibles to find and use that it’ll probably take a sane person weeks to find it all. An insane person probably already made a video guide and posted it to YouTube by noon on Launch Day.

Regarding the new enemies, I found them to be a pleasing addition, although having invisible minotaurs is not fair at all. The one thing I do have a problem with is that every single one of the enemies has the exact same weak spot now: the eye, even though the new enemy variants includes every single former enemy ever encountered. This means Vex are no longer killed by shooting their crystalline torsos.

Regarding the new subclasses, I’ve only heard good things about them. I myself have been playing around with the Nightwalker, the Void aspected Hunter subclass. It’s been plenty of fun, although while having a fire and forget Super is somewhat disappointing, it’s still incredibly useful. The other two subclasses for the other classes are great, with the Titan’s being actually highly mobile in contrast to the other subclasses. It still won’t beat me when I’m playing as Bladedancer, but it makes up for the fact that the Titan was a slow moving hulk. In addition, it actually brings the class into becoming a high damage dealing role. And that is something the class needed since Alpha. Titans were almost always asked to be Defender instead of Striker, which lead to Striker being largely forgotten unless you soloed.

Even more surprising was the fact that coming back after such a long break, there were actually things for me to do in the Tower, although only the top floor of the huge structure can be explored.

My first visit to the troll, I mean Cryptarch, also gave me the one gun I was searching for nearly half a year before quitting. That was pleasantly surprising, and even more pleasant was finding out that I’d be able to get a version that was up to par with any Year 2 Exotic.

The PvP is mostly the same, though the new mode, Rift, is kind of fun. Rift is what you take when you mix Grifball with actual level design and remove the one shot kill weapons. I enjoyed the single match of it I’ve played, although I’m not much of a PvPer.

The Strikes are incredibly tough to the point of being punishing on harder modes due to everyone’s gear right now being lower than recommended. Does that mean they are impossible? No they aren’t and as long as you do them with a group of friends and are relatively close to the recommended light level, you’ll be fine.

The new raid, King’s Fall, looks like they took the best parts of the Vault of Glass – the puzzles – and added the difficulty of the Crota raid with endless waves of enemies. I personally haven’t gotten a chance to go in, but watching friends do it via Twitch, it looked quite tough. I won’t give a final judgment on it now, but so far it’s looking good. There aren’t any major bugs we’ve seen in the four hours since it went live as of writing this. That being said, they probably are tons we haven’t encountered yet, this is Destiny we are talking about.

Speaking of bugs, they haven’t fixed some odd ones where if you jump and land remotely funny you instantly die. Cabal performing a melee and flinging you into a wall will still kill you as well.

So with all the fun and new features, does that mean that you should buy this game? Maybe, it’s fun. No doubt about that. However, it still has features missing that are so obviously needed that it’s baffling how we are 395 Days after Alpha and they still aren’t in the game. Things like a Return to Tower option, a way to use an ammo synthesis pack without going through the menu are sorely needed. Having in-game clan functionality, as well as the same for Grimoire Cards are still missing even though it seems like an obvious thing to do. These two in particular are among the most glaring issues that Destiny still has.

Most of all though, is the fact that the game’s random number generator is still incredibly unfair, and even after hitting 40, I’m still getting incredibly suboptimal gear from engrams. Is it better than it used to be? I have no doubt, but the fact that I killed well over ten thousand enemies in the past 24 hours and only saw one Legendary Engram drop is disappointingly unsurprising.

Overall, the additions and changes with Destiny: The Taken King makes it grand fun, but it still has enough flaws that players should give it a lot of thought before purchasing.