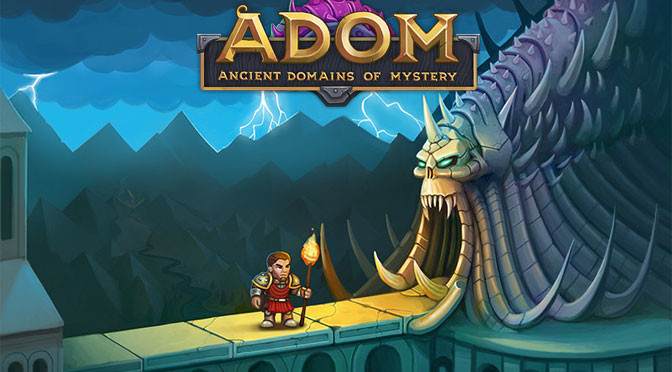 ADOM, or Ancient Domains of Mystery, has somewhat of a following since its original release in 1994. Even as far as roguelike games go, ADOM has quite the reputation as being a difficult game. You play as a warrior who must fight against the forces of chaos, but only if you packed enough sandwiches that you don’t have to eat random animals. Eating innocent creatures causes your character to feel guilty, guilt leads to your character being more easily corrupted which winds up causing your character to join the forces of chaos after some time, tantamount to a game over. See? This is why you’re always told not to forget your lunch.

Upon beginning ADOM, players are randomly assigned star signs, but then are able to choose from 12 races and 22 classes. Races have a strong effect on how quickly you’ll level, your alignment, equipment, and lots more. Classes, on the other hand, offer even more strengths and skills, as well as weaknesses, that can be used to further your chances of survival.

The classes in ADOM are known to be notoriously lacking in balance – while the game can be beaten with any particular race-class combination, any beginner should avoid starting off as a Chaos Knight as they begin with an assortment of corruptions (more on those later). Even worse, should you turn neutral or lawful in order to attempt the vast majority of quests (the pool of chaotic NPCs is slim if not using a guide), then your character will take a hefty amount of fire damage every so often and lose all benefits of the class. So, picking a good beginner’s class and race combination is a great way to get into the game without wanting to light yourself on fire.

ADOM’s method of play should seem familiar to those with some experience in most D20 game systems, like Dungeons & Dragons. Your character’s attributes are determined by race, class, and other factors, ranging from strength and dexterity to ones such as learning and perception. You select your talents, which grant various minor benefits, as well. Once actually in the game and experiencing combat, you’ll notice that damage is dealt utilizing simulated dice rolls, which should similarly be familiar territory for D20 system players.

The actual plot in ADOM is quite simple: You’re in an originally peaceful land, but abominations and other servants of chaos are wreaking havoc on the land- so you, among a multitude of other heroes, go to stop them. Your alignment, usually determined by race, will affect how you progress throughout the game. Neutral and lawful characters will mostly act like your average save-the-day hero types, defeating bandits and rescuing people. Chaotic characters will oftentimes be locked out of quests by neutral or lawful NPCs, but may be able to reach an entirely different story branch in joining the forces of chaos. Some quests even give you options between lawful and chaotic resolutions, further pushing your alignment toward one of those paths. A player that is fully corrupted will turn into a writhing mass of unadulterated chaos, thus ending the game abruptly. So…don’t go crazy with it.

As for the actual gameplay of ADOM, there’s so much that can be written that it’s crazy. Just about any object that can be picked up can be thrown by your character, and a variety of ways to get through the randomly generated dungeons exist, since you may be able to use a pickaxe to dig toward an objective one playthrough, but use a wand with an ice spell to create a bridge of ice, the next. You can use your skills to break walls, you may eat the corpses of fallen foes for sustenance, you can even toss a potion at an enemy to try and remove their hostility. While this is a lot to take in, combat in ADOM is a simple turn-based affair in which the enemies only move when you move or perform an action (like most roguelikes). You can throw or fire ranged weaponry on any enemy in sight, or walk up to an enemy and melee attack them, up close and personal (give them the Holly Holms special if you’re a Monk). Reaching zero hit points means your character dies and, like any roguelike worth its salt, means you start over from the very beginning.

The great thing about ADOM is that while some dungeons are randomly generated, others are predetermined. While some traps may have given you terrible luck and destroyed all of your equipment in your last run, you may not even find one of those traps in the next (I never run across those traps when using a character who can detect them!). There’s no perfect class to choose that will give you the easiest time in the game, as even the most well-rounded efforts will eventually be exploited and cause you significant amounts of trouble.

One of the greatest boons for new players contemplating trying ADOM should be that you can set game options that may make it easier for you to get into the experience. Players who just want to experience every bit of the chaos paths for quests may like to turn off corruption, while others may get sick and tired of buying food, so they turn off hunger. Monster difficulty can be adjusted to be harder or easier than normal, treasure can be halved or doubled, and permadeath can be turned off, as well. All of these settings affect your final score, with more difficult options increasing it by a multiplier while easier options lower it. These options are available for those who may need them, and are a welcome addition accompanying the original ASCII mode for those who may not like the new paperdoll aesthetics.

The graphics for the newest version of ADOM are extremely simple, giving a charming paperdoll appearance to the player characters and enemies. The environments are made out of attractive tile sets, as well, which are still fairly simple but always give you an idea of what you’re trampling underfoot. The music is quite fantastic, often consisting of simple, rustic tunes that are perfectly at home in such a game. While the extremely simple visual appearance may turn off some newcomers, the soundtrack definitely does not disappoint.

Of course, there are some issues. Back when ADOM originally released in 1994, there were a ton of keybinds. Some made sense, like K to kick something or D to drink. It becomes more obfuscated, however, when you consider that there are tons of incredibly specific keybinds that may be helpful to know (activate a trap in front of you is Control plus T, for example), though veterans of ADOM would find no issue with this. Newcomers may be pleased to find out that the game can be controlled nearly exclusively using the mouse, and while it may be a deal slower, it does have the advantage of displaying the keybindings as you click on the squares and choose actions, so you can slowly adapt the keystrokes in while playing with just the mouse, if you so choose.

So, ADOM is a tough, tough game. Some people who have been playing every so often for over a decade may yet to have seen the endings, yet they keep returning because ADOM is an incredibly rich and complex experience. Players who need a fancy user interface or intuitive keybindings may dislike ADOM greatly, while those who prefer hard-as-nails RPG experiences may enjoy ADOM thoroughly and not put it down for an extremely long time. This game is an acquired taste – the beginning of the game, the first village and its surrounding area, is known for being quite harsh and that is unchanged even in this release. Those willing to stick with the game, even after a few unlikely deaths, will undoubtedly discover a deep roguelike experience underneath the paperdoll surface (or letter surface, should you decide to go with the old school ASCII visuals).