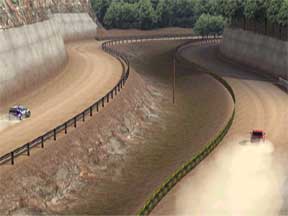 The driving game is an over-subscribed genre and anyone trying to enter the fray, will either have to beat the big boys at their own game, or failing that, bring some new and fresh ideas to an already flooded market. Namco’s R:Racing Evolution brings something old and something new to fans of the genre, which is not something you see too often and it should be applauded for that alone.

R:Racing features all the regular elements you’d expect in a racing game; lots of cool cars, tracks around the world, arcade action and championship challenges. That’s the old bit out of the way, but now for the new. This is where it all goes a bit Days of Thunder and we enter Racing Life, which is R:Racing’s story mode.

Rena is an ambulance driver until she gets noticed for her driving skills, plucked from obscurity and plonked in a racing car. Once she agrees to become a racer, it’s time to head out on the track to prove her worth. There are a couple of plot twists to pique your interest between races, played out in pre-chapter movies. The story does mean you have to tow the party line, as I found out when told to follow team orders and come second in a race. I tried winning anyway, but that just means you fail that chapter and get the option to retry until you do come second – harrumph.

That said, the cut scenes look lovely and the script is pretty good too. Although, I think they could have slipped in a few more gratuitous cleavage shots. But they made up for this oversight with the shower scene. Overall, it’s a thumbs up from me for the story mode, which succeeds in bringing a bit of fun into what could have otherwise been another run-of-the-mill driving game championship mode.

Once you’re on the track it’s time to slipstream every car in sight. R:Racing adds a nifty little feature called a pressure meter. When you stay close to the car in front a bar appears above it, which shows the level of psychological pressure the driver is feeling. The bar goes from blue through to red. Once it starts flashing red the car spins out under the pressure and you whizz past with the driver’s curses come over the radio. The radio is another good addition, which brings you comments from your pit crew and heckling from other drivers when you try to pass them and invariably watch them disappear in the rear view mirror, heh!

As a driving game R:Racing is incredibly easy. Any driving fan will zip through Racing Life in a couple of sittings, but fortunately, there are plenty of additional modes to keep you occupied. After each event you earn credits, which can be used to buy into race events in Event Challenge. All the usual driving game fodder is present here, including Time Trial, Single Race and One-Make Race or test your braking finesse on the stop-go challenges in Extra mode.

Once again, there are no surprises when it comes to the cars. Everything from prototype to performance, rally spec and even some classic cars are thrown in for good measure. When it comes to driving the things though, R:Racing is a little patchy. I’ve never driven a hovercraft, but I suspect the feel of some of the cars in this game, wasn’t far off. Handling seemed erratic, rather than dependant on the car you were driving. For instance, driving a mini in One-Make mode was more like driving a front-wheel drive on an ice-rink. R:Racing is certainly no GT or Colin McRae when it comes to replicating the driving experience, but there’s some fun to be had none the less.

My favourite aspect of the game was the variety of driving experiences in Racing Life. One minute you were ripping up the track in Fiat 500 and believe me they can rip when they put their mind to it and the next it was American muscle cars a-go-go for some drag racing. Yes, I said drag racing and yes it is cool, but I would have liked more speed. I wanted the full on Fast and the Furious style blurring when I hit the Nitro. Alas I was denied, but the drag racing was a nice change from going round a track.

There was also some rally driving thrown in for good measure, which predictably, was my favourite part. I did have some issues with the co-driver’s directions though, as in they were completely useless. The rally sections suffer the most from the shoddy handling, but as an arcade style distraction I think they were fairly inoffensive.

R:Racing isn’t going to win any awards for breaking new ground, but it offers a nice driving variety pack for anyone who likes to go for a spin via their joy pad. Die-hard driving fans should be aware that there is virtually no challenge to be had, just a bit of well-rendered cleavage, oh and some driving fun.