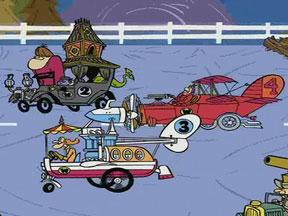 Wacky Races was a cartoon that aired back in 1968 and had a long-running presence on Saturday morning cartoon schedules throughout the country even after its 1970 end-date. Now, nearly 40 years later, a game has surfaced that attempts to bring the animated classic back into the limelight, only to succeed in creating a very forgettable title.

Still, the overall charm that Wacky Races: Crash and Dash hoped to accomplish is superficially present on the game’s outer surface. It’s stylish in the ways it should be stylish, calling memories back to a simpler form of animation, and its antics parallel the cartoon’s theme perfectly.

But digging deeper (aka actually playing the game) brings a major letdown that fans of the old cartoon will find disheartening, especially if they were hoping to pass the love of Wacky Races to a new generation.

Being another variation on your most standard of standard racing games, Wacky Races starts out with a promising first round, only to re-gift that round over and over again until the very final stage of the game.

And I’m not only talking about the gameplay here.

Actions, sounds, voice acting segments, cut scenes; the only thing that seems to change in this title is the 24-track course environment, a feature which only minutely effects the game’s mechanics.

Wacky Races: Crash and Dash features 10 different character vehicles that will fuel tons of nostalgia, but leave players wanting for functionality. Each car has its own meager power-ups, its own designs, and its own separate names. Other than that, nothing distinguishes one racer from the other. Driving controls suffer deeply from the curse of repetition, engaging its player for the first or second race, but after using these same maneuvers over and over again, the game gets extremely tedious.

When playing with the Wii, you can use the nunchuck control stick to steer your vehicle. Use the D-pad to toggle through the Wacky Powers. Use the A button to activate the powers. Shake the controller to sprint.

As an invited break from form, the game’s cut scenes introduce the dastardly duo, who try to throw racers off by way of sinister side tasks, but, again, these presentations get old quick, as do the side challenges themselves. Though, admittedly, these short additions to the game will sometimes surprise you, for the most part they do little to redeem the overall experience. Too bad that Dastardly and Muttley can’t save the day.

Taking all these problems into account, it’s hard to understand why Eidos greenlit this project. Hopeful as it may seem that there are hordes of Wacky Races fanatics still out in the gaming world waiting for a chance to catch up with their favorite characters, the truth is that this game was most likely going to fall on deaf ears, and that’s even without all the examples of boring gameplay.

Even to pass this off as merely a children’s game gets a little sticky, since half the audience playing this game will be bored of it far too soon, and the other half won’t know the source material at all. And while there are a handful of different bonuses that the game provides, the overwhelming amount of looming negatives are just too burdensome to ignore.