Mention The Legend of Zelda or Pong in conversation, and it’s pretty easy to identify the gamers in the room by the way their ears perk up. Few games conjure up such feelings of nostalgia and reverence for how they changed the landscape of gaming, each in their own groundbreaking way. Even now, classic Zelda and Pong rank among the most loved properties of all time. They’ve stood the test of time and served as the inspiration for countless other games. But there are things in this world that, although magnificent on their own, should never be blended together. SpiritSphere tries though.

Just like putting General Tso’s chicken into a blender with chocolate frozen yogurt would be a terrible idea, combining Zelda and Pong in this basic iteration simply doesn’t work. Unfortunately, that’s exactly what SpiritSphere is — a game that takes two great ideas and puts them together in an unpalatable blend. 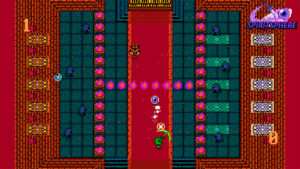 The concept of SpiritSphere is straightforward: Playing as a Zelda-inspired character, you and an opponent strike a magical ball back and forth, trying to hit the wall or some other target on your opponent’s side of the level. Players can strike the sphere with a straight shot, powered-up curved one, or simply deflect it back by positioning themselves in front of it. Different items occasionally drop, which allow you to set up obstacles or inhibit your opponent by shooting an arrow at them or hurling a bomb, but there’s nothing that changes the game dramatically.

And that’s basically it. The game sorely lacks variety and is marketed as a local multiplayer experience, which it has to be since there’s no online component to it. Basic AI and a handful of game modes don’t do SpiritSphere any favors either, with practice and single player being the only options available if you don’t have a friend to play with.

If you do plan on going it alone, there’s a severe lack of depth here. Different characters play with their own styles, but the biggest difference comes down to character sprite, with nuance lacking. There are different levels, characters and magic spheres to unlock, which alter gameplay slightly, but every match usually feels the same. 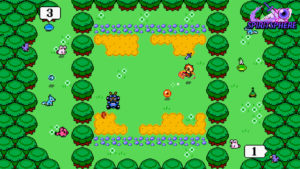 The controls further inhibit gameplay, with quick dashes being unresponsive and the finesse to hit precise curved shots lacking with keyboard controls. It’s possible to hook up a gamepad to make the controls a little easier, but the keyboard setup feels cumbersome and clunky.

Menus can be a pain to navigate, too. Everything is laid out well enough, but there’s no logic to what button you have to hit in order to cycle through them. Hitting enter generally advances you to the next screen, but that can inexplicably change to the spacebar. Generally, holding escape takes you back to the previous menu, but I was left confounded by one menu in which the X button abruptly became the back key. 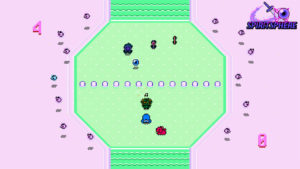 Poor gameplay and tedious menus aside, the one thing SpiritSphere does succeed in is evoking feelings of nostalgia. With excellent eight-bit-style music and graphics, it’s easy to feel like you’re standing in front of an arcade cabinet or firing up the old NES. The color scheme is nearly perfect, and character animations hearken back to the classic top-down Zelda games and other greats of generations gone by. The audio is equally evocative of gaming’s early era, and you even unlock new items by throwing coins into a magic fountain, a clear homage to Zelda.

Sadly, the superb atmosphere doesn’t mask the bland gameplay, and without online challenges or a friend to play with regularly, there’s little value here.

SpiritSphere earns just 2 GiN Gems out of 5 for dropping the ball.