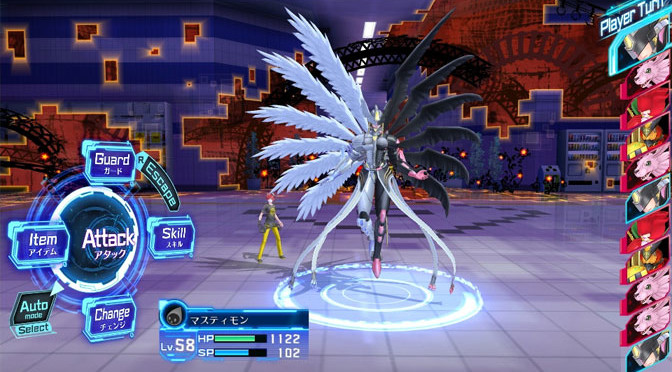 I’m back with a game that came out of nowhere for me, but one that I was very happy to review! It’s Digimon Story: Cyber Sleuth!

Plot Synopsis: Players assume the role of either Takumi Aiba or Ami Aiba, a teenager who gets caught up in events way over their head, and plunges into the history and depths of the latest Virtual Reality space EDEN.

Plot: The plot isn’t super amazing, and there are times where I’m hearing one thing in Japanese and reading another in English. In fact there is plenty of times where I’m reading something that is obviously translated improperly, things like “She was unresponsive” when said person is very obviously a male. That is probably my biggest gripe with this, and that’s the terrible localization that was done. It was pretty horrendous. I’ve seen illegal and generally terribly done fansubs of Anime that made more sense than this game does at times.

That isn’t to say that the plot is terrible, it’s just not super amazing. Fans of the series will undoubtedly love it and my own inner child wasn’t too put off by the nonsensical translations.

Gameplay: In what can only be called Pokemon properly done in 3D, Cyber Sleuth takes the gotta catch em all formula and complicates it immensely by introducing the ability to evolve and devolve at will your Digimon if conditions are met. Most of the time these are super easy to fulfill and not that difficult to deal with.

[amazon asin=B00X8Y18U6&text=Pick up your copy of Digimon Story: Cyber Sleuth from Amazon today.]

However a clever gamer can use this to his advantage by using the auto training function included in the game, which is a huge godsend by the way, as soon as it’s available, which is very early in the game. If that clever player uses it to evolve their chosen starter just one time and get a second Digimon to the same rank, you’ll quickly demolish anything in the first few chapters of the story. It will eventually lose effectiveness, but early on it completely breaks the game, and even in the end game it’s still an incredibly useful tool to use.

The battle system is pretty much Pokemon, with the addition of combination attacks if the camaraderie stats of your battle team is high enough. It’s simple and effective and most JRPG fans will love it. That said it can get repetitive.

Art: The art is great, I wasn’t disappointed at all with the art in this game, unlike the translations.

Overall: For those who love Turn Based RPGs, Cyber Sleuth is a must play.

For those who like: Digimon, Turn Based RPGs, The Gotta Catch Em All Playstyle, Decent Plot, Great Artwork, Excellent Gameplay, Good Musical Score.

Digimon Story: Cyber Sleuth earns 4 out of 5 GiN Gems for offering a pretty cool alternative look at the world of Digimon.