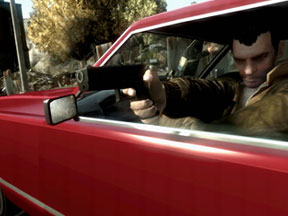 The first mention I heard regarding Grand Theft Auto IV was at E3 2006, when former Microsoft head Peter Moore revealed it tattooed on his arm. The fact that the 360 version would be in a simultaneous launch with the PS3 version sent shockwaves through the gaming community. Sony’s exclusivity stranglehold during the PS2 era came to an end with the jump to the next generation, and in doing so, led a torrent of former PlayStation exclusives to jump ship to the 360 (Ace Combat, Devil May Cry, etc.)

It might have been the start of a renaissance for Microsoft, but in the end, how well would the latest chapter of one of the most praised, and yet the most controversial franchise turn out?

Leading up to the original launch date, trailer after trailer arrived, and my initial impressions, as well as those of my fellow GamerGeeks cohost, were not positive at all. The trailers failed to impress the both of us with its poor frame rate and lack of originality, and in turn, we both thought that the game was just a next generation rehash of the PS2/Xbox trilogy.

Oh how wrong we were! When Grand Theft Auto IV was finally released on April 29th, I had no problem at all with eating my words. Right from the moment I watched the opening cut scene I knew that this was not the Grand Theft Auto of old; it was a whole new experience.

And we can tell it’s a whole new experience when we are introduced to the main character, Niko Bellic. Compared to the original main character (the mute Claude,) Niko is a complete departure from the series. Being a Serbian immigrant, he arrives by boat to Liberty City to meet up with his cousin, Roman, who promises to offer a slice of the "American Dream." However upon arriving, Niko realizes that Roman is living a lie. He works at a local cab stand, is massively in debt, and is constantly hounded by loan sharks. Of course fixing the problem falls into Niko’s hands, but trouble just builds up from there.

One thing that GTA fans will notice is that this is not the Liberty City we are familiar with. Where the GTA III version consisted of only three main islands, the next generation version is five separate boroughs. Niko starts off in Broker (Brooklyn) but will also be exploring neighboring Dukes (aka Queens,) crossing the bridge to Algonquin (Manhattan) and Bohan (the Bronx,) and finally ending up in Alderney (New Jersey.) Staten Island was not included in the game. Those that are familiar with New York landmarks will be impressed with GTA’s versions, such as the Statue of Happiness, the GetaLife building, Firefly Island and its "Screamer" roller coaster. The size of the new Liberty City rivals that of San Andreas, only here there are no dead spot areas.

During the course of the game, the most important tool that Niko will have is his cell phone. While phones were used in previous games (and before that a pager) GTA IV’s cell phone goes even further by allowing access to all of his contacts and from each selection offering to just call them, seek out sub missions, or offer to go out and play games (pool, darts, and bowling) or to go out to eat or visit a strip club. The new phone is a great addition to the game, but at times it can be a true pain to deal with. I cannot count how many times I was trying to go to a mission, only to receive a call from Roman with an offer to go to a "gentleman’s club." Thankfully if it does happen during a mission, Niko will automatically say he is unavailable. The phone can also be used to call emergency services such as the police, fire department or paramedics. Police cars also have their own form of communication as the LCPD database can be accessed for a list of possible criminals or to locate crimes that can be stopped.

The phone is not the only method of communication available as Niko can actually get access to an in-game Internet and email, a first for a GTA character. Email will allow access to more missions, as well as continue objectives that could run the course of several days.

During missions the control system has been vastly improved. In the past one of the biggest criticisms of the GTA series was targeting. While it was vastly improved in San Andreas, even that is eclipsed with the new targeting/cover system. Taking a cue from Gears of War, Niko can now lean up against structures as a form of cover, popping out to either do blind fire or aim at his foes. Doing so makes shootouts much easier to perform and makes a great game even better. You’re actually fighting the enemy rather than fighting the controller.

This is also the first GTA title to officially feature online multiplayer, featuring fifteen various modes of play, including deathmatches, car jacking challenges, turf wars (reminiscent of San Andreas,) races, and even a free mode which allows full exploration of Liberty City. At the time of this writing, the online component has even beaten the mighty Call of Duty 4 for top Xbox Live game. It’s only a matter of time to see how long it lasts.

As always, the presentation of GTA is top notch. The first thing that is obvious is the huge graphical improvement. Not just a result of a new generation of consoles, it’s the combination of Rockstar’s new RAGE engine (which made it’s debut with Table Tennis) and the Euphoria animation engine that makes the visuals shine, right down to the eerily realistic lip synching during all of the real time cut scenes. There are no FMV shortcuts here at all.

During the game the visuals are equally impressive, featuring tons of detail with almost none of the slowdown and frame rate issues that we witnessed in the trailers. Rockstar North put the extra development time to good use and it shows.

The biggest surprise though with GTA IV is that it breaks the tradition of using big name voice talent. But after hearing the game, it almost seems like a moot point. The voice acting again is top notch, maybe even better than the all star titles of the past. Michael Hollick has the lead role of Niko Bellic, and while I have never heard anything else he may have done (or known about it,) his performance is top notch. I never thought I’d find someone who is supposed to be a trained professional killer and a veteran of the Bosnian War to be so likable. He might even replace Tommy Vercetti as my favorite GTA character.

He even has to deal with "morality choices" of whether to kill someone or spare them, something the other GTA protagonists didn’t have the chance to do.

The rest of the voice cast is also equal to that of the A-list celebrities of the past, as well as the tradition of amazing radio stations that make a return. With a soundtrack of over 200 songs covering sixteen music stations, there is something for everyone to listen to. Unlike the characters, the radio stations do feature Djs performed by some well known names such as Juliette Lewis (Natural Born Killers,) Iggy Pop, and Karl Lagerfeld. There is even a station that mocks the real life JACK-FM format by listing the DJ as "a computer." Classic!

And of course, there are the talk stations. The two main talk stations are PLR (Public Liberty Radio, an NPR parody) and WKTT (We Know The Truth, a conservative talk station.) However later in the game, GTA mainstay Lazlow makes his return with Integrity 2.0, an underground "man on the street" style program where he is mostly insulted by those he speaks with.

But for the first time in a GTA series, there are also television shows that can be watched in the main safe houses. As if the radio stations weren’t funny enough, some of the programming shown on networks WEAZEL and CNT take that to a whole new level. One show in particular is called The Men’s Room, a call in show featuring real life mixed martial artist Bas Rutten and fictional character Jeremy St. Ives. Never before did I think that outside of the Octagon, a MMA fighter can be as funny as Bas is.

The Special Edition package is worth a purchase for all the bonuses it provides. In addition to the game itself, the package includes a Rockstar duffel bag, a cloth hardcover book featuring the art of GTA IV, a soundtrack CD, and a free month of Xbox Live. All of this is packed in a high quality safe deposit lock box complete with keys, which I consider the best part of the package outside of the game itself.

Within a week, both the 360 and PS3 releases of Grand Theft Auto IV have beaten the almighty Zelda: Ocarina of Time on the overall GameRankings scale and for good reason. It exceeded any expectations I had with the series in the past and blew them out of the water. And the scary part is, this is only the beginning. Xbox 360 owners will also be looking forward to episodic content coming out this fall, and combined with the online multiplayer, I can rest assured that GTA IV will be in my 360 for a long time.