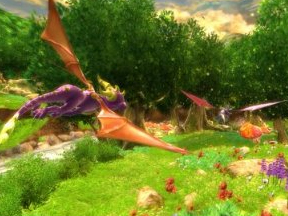 Legend of Spyro: Dawn
of the Dragon

It’s a purple haze! No, this isn’t a Jimi Hendrix tribute concert I’m talking about; it’s another Spyro game, with emphasis on the word "another." No matter how many times the little purple dragon graces gamers’ consoles, people never seem to tire of him. The Legend of Spyro: Dawn of the Dragon is the latest installment in the long-running game series. But in a market so focused on first-person shooters and all action, all the time, Spyro faces some stiff competition.

Make no mistake, The Legend of Spyro isn’t a bad game by any stretch of the imagination. I freely admit that when I popped the game into my system, I was expecting to be bored to the point of falling asleep. Yet as I began to play, I found myself enjoying the deceptively simple controls and objectives set before me.

Players are given the option to play as either Spyro, the beloved purple dragon, or Cynder, the once evil dragon turned good. What makes the game interesting is the ability for players to switch between the two at any given time. In some cases, players are even required to switch. Each one of the dragons has four different abilities, but for the most part play and control in the same way. As players progress, blue crystals appear from fallen enemies and broken treasure chests.

These blue crystals are then used as a means to level up the four different abilities each dragon has. The level-up system is fairly basic, with each level in a different skill granting a new ability. For example, powering up Spyro’s fire breath will unlock the ability for him to charge at enemies in a fireball-like ram.

To complement the ability to level-up powers, there are also different pieces of armor scattered throughout the various levels. The armor can have any number of benefits ranging from increased attack speed to increased attack power.

Keeping things relatively simple, the combat is fast-paced and fairly random. Players will more often than not find themselves in the middle of a throng, mashing away at buttons and sending some kind of dragon fire into the thrall. This theme continues in most fights, with little variety to the combat.

But while the game’s combat may be simple, there’s nothing simple about the environments and art work. Dawn of the Dragon is a vibrant myriad of colors and environments. The different levels feature solid platforming and are expansive enough to allow for minor exploration. For the most part, however, levels are straightforward in their goals. Players have different areas that they can go, but there’s a clear path that the game wants you to take.

The only real issues with the overall look of the game are that it can look a bit childish at times, with certain areas underdeveloped, and there are occasions where minor frame-rate issues come into play. As a whole, though, the game is above average, and uses a simple art style well.

Enhancing the solid graphics, the sound in Dawn of the Dragon is spot on. Elijah Wood reprises his role as Spyro and does a nice job with delivering the charming, albeit, corny lines that Spyro must utter in every game. The music is also well-orchestrated, and helps to bring the environments to life.