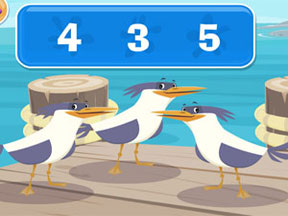 Nemo is a little fish in a big ocean, so when his teacher (Mr. Ray) sends his class on a scavenger hunt Nemo corrals Dory and they head off for a learning adventure. Children help Nemo and Dory solve learning-related puzzles which allow them to travel to different parts of the ocean. At each stop children can help Nemo locate and photograph the objects of the scavenger hunt as well as explore new areas of the ocean.

The learning puzzles incorporate basic pre-K math and reading skills including number and letter recognition, shapes, colors and pattern completion. Each learning puzzle has two levels and children may choose to advance to the second level after mastering the first level on each individual puzzle.

The second level puzzles are longer and usually incorporate more than one learning element. For example, on the first level a child is asked to find the letter T while on the second level the child is asked to find the Red letter T. Though, as one 5-year old tester pointed out, this often makes the choice easier "I know that one’s the T because it’s the only red one!"

Sandwiched between the learning games is the more free form exploration of objects on the screen. Nemo and Dory have reached a new part of the ocean and children help them explore it by clicking on objects. Anything can happen from a disappearing octopus "No, Dory, he’s just cam" camof" camouflaged!" to an undersea drum set to a new fill-in-the-missing-letter game.

Children also collect periwinkles throughout the game to earn animated stickers for their digital scrapbook. Mr Ray will tell them interesting facts about the sea creature stamps as they place them in the scrapbook.

In overall terms of learning, it strikes a reasonable balance for what is understandably a wide range of learning levels between 2 and 5 year olds. While 2-year olds will find identification of numbers, letters, colors and shapes challenging, 5-year olds will be able to review those same concepts while picking up vocabulary words and facts about ocean creatures.

The interface is relatively straight forward and appropriate to the target age group. Children age 2-5 can pick up the mechanics of the game in short order so that they can focus on the learning and exploration central to the software. The game play follows a very linear exploration, puzzle, exploration, puzzle pattern which older children might find a bit limiting but is beneficial to younger children.

This game is charmingly animated in the traditional style rather than the slick computer graphics you might expect from a computer game based on a computer animated movie. Although this was probably done to save money on the production, the effect is still appropriate to the target age group. The characters’ and their personalities are still easily identifiable to anybody familiar with Finding Nemo the movie.

As you might expect, the audio component of a computer game aimed at the pre-literate set is critical to the overall game play. In this case, the voices of Nemo, Dory, Mr. Ray and Nemo’s classmates are all clear and easy to understand while still easily conveying the personality of the characters from the movie.

This game is recommended for children aged 2-5 years old. I agree with the lower range and am happy to see some software appropriate for two year olds. On the upper end of the range I’m not so sure. My five-year old test group seemed to enjoy the software but breezed through the entire game twice in a little more than an hour.

For the suggested retail price of $19.99, I could recommend it for home use for 2-3 year olds but I believe the 4-5 year olds will quickly grow bored and will not get a good bang for the buck. However, the overall good quality of the game, the universal appeal of the characters and the applicable age range make this software almost ideal for a pre-school or daycare environment.

GiN does not have a rating for Educational content in games, but if they did I would say this one is about a 3.5 because it strikes a good balance between fun and learning. Overall I would qualify this as a good little game with emphasis on the good (good quality, good game play, good characters) and emphasis on the little (four puzzles, four exploration screens, the scrapbook and you’re done).