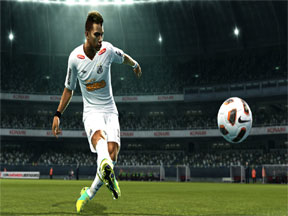 I’m going to be upfront about something: I am by no means a soccer nut. If you start asking me about how certain clubs are doing, even the club in my own state (The Columbus Crew) then all I’d be able to do is stare at you with a look similar to a deer caught in headlights. Lucky for me, I used to work with a huge soccer fan named Rod who taught me quite a bit about this very cool game.

If it wasn’t for Rod I wouldn’t even know what off sides meant in soccer. One day at WHIZ-TV (my place of employment before GiN) we were in between shifts and had nothing to do, so Rod showed me differences between strikers and midfielders among other things. This lead to some pickup games, one on one mostly, where I came to really appreciate the sport, which is wildly popular almost everywhere in the world other than the United States. So I am now a fan, but not a crazy soccer-loving fan like some people.

Anyway, armed with this knowledge, I started Pro Evolution Soccer and was instantly pleased with the cut scene graphics. Outside of those cut scenes though, the graphics deteriorate to average levels.

I started with exhibition first and found the controls similar to most soccer games I’ve played. They work fine and are precise enough for good ball control.

However, when I was looking through playable teams, I was kinda bummed out. None of the teams in the MLS were available, and even in the English league, the crÃ¨me de la crÃ¨me, had many of its better teams missing. Chelsea, which is like the Yankees of soccer, are nowhere to be found. I understand that this is probably a licensing issue, but I was still kind of sad that almost none of my favorite players could be found.

In the exhibition menu, you can choose international teams. I chose my country of origin, (Serbia, hence the last name that my coworkers can’t pronounce) and looked in dismay at the roster. With half of their regular teams unavailable, the roster was limited…and that was being kind. I followed Serbia in their hunt to not make it to the Euro Cup qualifiers, so I was familiar with the roster.

Granted some of the players were there…just none of the really good ones. I managed to win my exhibitions, but seeing as I was missing my good strikers, including the one who is over six and a half feet tall, it was tough.

So next I went to the "become a legend" mode. In this mode you get to create your own player and work your way through leagues and clubs as you try to make a name for yourself. I made myself a forward so I had the opportunity to score goals more often. Deciding to start small, I joined a league in the Netherlands.

After taking the MVP and award for most goals scored in a season, I transferred to the English league where the team I joined moved me to every position that wasn’t a striker.

Even though I’m not a huge soccer fan, I still found this game very entertaining. The controls are very easy to pick up and your character customization is quite in-depth.

Almost all the issues with the game were on the audio side. As with most sports titles, the commentary tends to get repetitive. In PES though, I’ve heard the same lines every game, every time, regardless of team. After you’ve played one full game, you might as well just play music over the commentary in my opinion. Music in this game isn’t bad, but normally it’s so far in the background you can barely even notice it’s there.

Also as I hinted at earlier, the in-game graphics are about average. Similar to ninety percent of the 3DS games I review, I highly advise leaving the 3D lever off. The 3D doesn’t really add anything here. Thankfully, you still have a great game in 2D.

Pro Evolution Soccer was a lot of fun, enough for an average soccer fan to award it 4 GiN Gems. Diehard lovers of the sport will probably take that even higher.