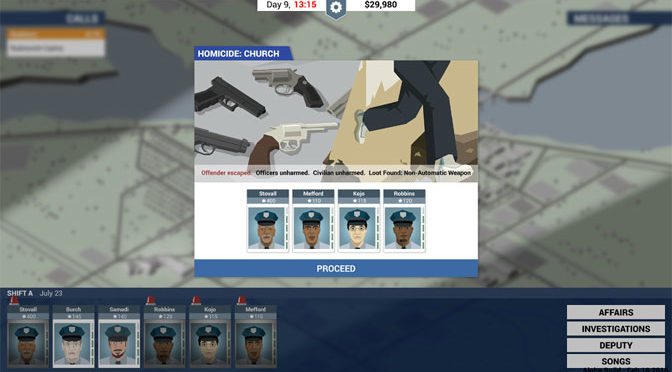 This is the Police

Since its August debut, This is the Police has made some serious waves in the Steam Community, delivering a gritty, yet immersive and compelling gameplay experience to PC players. Now, just a few short months later, after harnessing quite a bit of momentum, THQ Nordic and Weapy Studio’s cop simulator ports over to consoles with all the bells and whistles giving newcomers a chance to share in this true to life experience.

The game takes place in the crime-filled city of Freeburg, and puts players directly into the shoes of Jack Boyd, a 60-year-old Police Chief whom life has thrown one hell of a curve ball recently. After several years of duty and service to the city he finds himself prematurely forced into retirement by the questionably corrupt Mayor. To add more salt to his cereal, he’s been given an expressed ultimatum to not rock the boat if he intends to finish out the entirety of his last 180 days in office. With retirement fast approaching, Jack will need to figure out how to juggle the extra added stress of being Chief and acquire a substantial amount of dollars in order to firm up his financial future.

[amazon text=Help the citizens or yourself with a copy of This is the Police for consoles from Amazon!&asin=B01MTB9RXC]

The overall presentation of the game could be considered clever: A mix of bland cell shaded graphics and “ho-hum” eye candy overlaying a deeply authentic and engaging audio and gameplay engine. Remarkably, it all comes together extraordinarily well delivering a surreal play experience.

Being a Police Chief is tough business. Being the Police Chief of Freeburg, is a whole other monster. Managing the inhabitants within requires a great show of force to help keep things in order. Fortunately, Jack has at his disposal a sizable staff of patrol officers, detectives, and SWAT to cope with the everyday demands of city life.

When calls of all nature start to pour in from dispatch it’s up to you to help Jack decide how to go about diffusing the barrage of random situations. Patrol officers make up the bulk of your team and are necessary in answering a wide range of calls anywhere from suspicious suspects, carjackings, and muggings to vandals, drug dealers and special need situations.

Freeburg is also home to some really dangerous characters and so it’s not uncommon for homicide cases to come across your desk on a frequent basis. You’ll need to put your best detectives on these kinds of cases. They will go out and gather as much intel or physical evidence as possible from the crime scene. Every time a piece of key evidence is unlocked a new picture will be added to the case board back at the office. Once enough pictures have been collected you will work with your detectives to place them in proper order and trace the scene of the crime back to the suspect thereby solving the case.

Once a case is solved it’s time to make the arrest. Unfortunately, not every criminal will come peacefully. Some will give up on the fly when surrounded. However, the more dangerous ones are likely to resist arrest and be combative. In order to ensure they are safely apprehended you will need to send experienced officers and even SWAT to get the job done right.

The lines between work and personal life can become blurred from time to time for Freeburg’s finest. Part of being a good Chief is learning how to consistently manage that line from day to day. You have to keep a careful eye on your staff’s behavior, professionalism and health. Else they might make critical mistakes on the job. Problems and situations outside of work often crop up in the lives of your staff revealing issues such as family problems, mental and physical health, addiction and a slew of other random situations. More than oft these types of situations will lead to an employee requesting to be excused from work. The power to grant or deny these requests lies solely within your hands and the decisions you make will have an adverse impact on the workday.

On the surface this has been the day to day grind for Jack Boyd the past many years: Balancing and managing the members of Freeburg’s law enforcement and keeping order in the streets. However, as you come to understand his story and walk in his shoes a bit, you begin to see a man worn down by the vicious cycle of life, yet married to it all at the same time. It’s become all he knows to do. And now, as fate would have it, the one thing that still has some real meaning in his life is prematurely coming to an abrupt end. It’s given him time to think and contemplate everything in his circle.

As if things couldn’t get worse, in the midst of his career being hung out to dry he finds himself confronted with other weights of life. City Hall is constantly breathing down his back to make the hard decisions and keeping his bosses happy is critical to keeping headquarters running efficiently. The Mafia strengthens its hold on the city with each passing day and some seriously dangerous and shady characters seeking more power and influence in Freeburg have begun to approach him making him “offers he can’t refuse.” Moreover, things have taken their toll on the home front, leaving him alone and miserable. Except for the gossip of the daily papers, a routine morning commute, and a small collection of music records that’s seen way too much use, he doesn’t seem to have much to look forward to anymore.

The real beauty of this game is that you “get it.” You will really get it. You get Jack’s story. It’s believable. It’s relatable. It’s a role player’s dream.  It’s up to you to juggle the treadmill and tragedy of Jack’s life and you’re going to be forced to make decisions that will have significant repercussions on your overall experience. There’s plenty of replay value here as well as you’re going to find yourself pondering your past interactions and decisions on more than a few occasions.

At a time when the market has become slightly stale, there on the shelves of your local game store lies a small nugget of gaming goodness tagged with an affordable price…clearly This is the Police is a must-buy and a must-try. This is the Police earns a solid 4 out of 5 GiN gems.