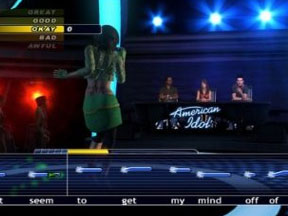 When Karaoke Revolution Presents American Idol Encore 2 came in for review, I rolled my eyes because while my wife and I have enjoy as much of the Karaoke Revolution series as we have been able to find, the last thing we needed in our small one bedroom condo was another microphone.

Now as I sit down to write this review I went looking to see what other platforms this game came out for and imagine my surprise to find out that this game is only sold as a bundle with the microphone.

I think that is one of the stupidest things I have ever run across lately. The primary purchasers this game are likely to be people like my wife and I who have played the first two American Idol games and they are probably people who have other games in the series like the popular country music game that is still my wife’s favorite and all of those where sold with or without a microphone in case you already had one.

This does not affect me, but the other stupid thing that I think they did with this release is drop the PlayStation 2 version of the game. While I think that was unwise, I will give them the benefit of the doubt here, as I don’t have access to sales numbers from the first encore release.

If you loved the first encore pack, you are going to love this one as well as this is basically the exact same game with a few new venues thrown in. You pick your song, you sing along with the words at the bottom of the screen at the right time, using the right pitch and then you will be judged by Randy, Paula, and Simon.

Though by that point you generally have a pretty good idea of how you did anyways. The judge’s comments always seem a bit canned to me and this go around Blitz Games did not even update what they are wearing or their comments from the first encore pack.

To be perfectly frank, I was actually thinking some fairly good things about this game when I sat down to write this review and I actually had a lot more to say. Admittedly it is nothing new, but I figured for about $30 for 40 new songs and it seemed like it was a pretty good value for the money.

Then I saw that it IS only selling for $50 with a microphone and I just became disgusted.

About the only thing going for this game may be the song selection which I have included below.