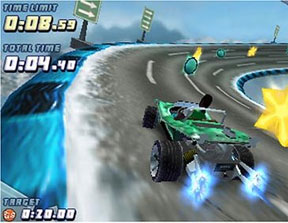 With the release of the PSP, Sony has now unveiled a new label called Platform Publishing.

So what exactly is Platform Publishing?

The PSP is a great platform, but as of yet does not really have a killer app that one thinks of when they think of the PSP.

Probably Platform Publishing was created to solve this, though neither of these first two titles will probably accomplish that goal.

The first two of Platform’s titles were designed with the concepts of quick playing, easy to pick up game titles, which is what the PSP is best suited.

The first title is an action puzzler called Frantix. The main concept of Frantix is to obtain a set number of jewels and make it to the exit. Sounds simple but eventually it won’t be.

While the early stages might take no effort at all, eventually the later puzzles will take some intuition to solve.

And with over 150 levels to endure, there is plenty of replay value.

However, being such a simple puzzle game, the lack of a true storyline or plot does make solving all the puzzles seem a little unrewarding. That, however, is not the biggest problem the game has.

The biggest concern is the control.

At times it feels like the player is running on ice, and in a puzzle game that requires quick thinking and strategic planning, that can lead to frustration. With a game like this, you need tight contols all the time.

Nonetheless Frantix looks gorgeous for a PSP title. While being a simple puzzle game, the environments are highly detailed and smoothly animated.

Audio is a little on the weak side, mostly consisting of simple music and a moaning sound when your player is defeated.

For those who want a simple puzzle game without any major frills, then Frantix may be for you.

Described as a "Puzzle, Platform, Driving, Action" title, Gripshift will test every aspect of your gaming skills to jump from level to level. While most races will consist of getting to the finish line, the challenge is finding how to get to the finish.

When you consider there are multiple routes, teleporters, jumps, loops, narrow roads, and many other dangers, the game can become quite a challenge.

Control might also cause a challenge in its own as when on the ground, the cars are very sensitive, and when in the air, they don’t feel like cars at times.

In addition to the racing challenges, there are eight additional bonus games that are quite enjoyable, such as Penguin Bowling, Bomb Pool, and Soccer Crazy.

The game can be played by up to four people via the PSP’s ad hoc more, but not through Wi-Fi internet.

Visually the game is impressive, but since the race courses are floating in midair, the detail is not as elaborate as it is in Frantix.

Music is a little funkier than Frantix as well, but at times it can get a little irritating.

In any event, both of these titles are a good start for Sony’s new publishing line.

They might not be the killer app titles that Sony needs for their PSP, but it does give PSP owners a breath of fresh air from the swarm of UMD movies and PS2 conversions.

GripShift, which is a little bit better title, earns 3 +.

We look forward to seeing what else Sony has in store for its Platform Publishing line.