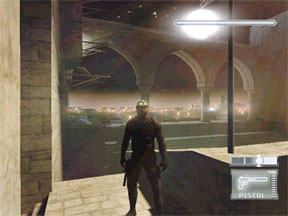 When Pandora Tomorrow came out on the Xbox gamers were enthralled. Ubi Soft had once again taken the stealth formula that Hideo Kojima had concocted and advanced it in every way. The game had improved on everything that made the first game so great as the keen level of realism kept gamers engaged while the dynamic lighting and silky smooth animation furthered the immersion. To put icing on the cake there was the awesome online multiplayer that was so innovative you couldn’t help but come back for more…even if it was 2:00AM and you had to get up in four hours. Now the game has come to PS2 and the Gamecube and a wider audience will get to enjoy the beauty that is Pandora Tomorrow.

The game’s plot is simpler to understand this time around. A man by the name of Sadono, an Indonesian guerilla, has threatened to unleash a wealth of biological weapons on the world. Sam Fisher, a member of a secret government group known as the Third Echelon, is sent in to infiltrate and eventually destroy Sadono’s sadistic operations.

One improvement gamers will notice quickly is that the environments you play in now are much more varied than those seen in the first title. In the first Splinter Cell most of the places you snuck around were building interiors. Now, Sam Fisher is globetrotting and you’ll get to hit up locales on different continents, traversing through thick bushes, running down alleyways and hanging on for dear life on the side of speeding trains.

The intricacy in these levels is unbelievable. In order to get through the levels you will definitely need to be paying attention and you’ll need to have a little imagination. Not every plan you come up with will work and not every plan will go exactly as you wanted, so the game becomes an exercise of trial and error. For those with the patience required from this title, Pandora Tomorrow will be a deeply rewarding experience. For those who want things to move a little more quickly Pandora Tomorrow will become a lesson in frustration.

This time around Sam Fisher is once again given a plethora of weapons to use in his fight against evil. Included are a lot of the weapons and gadgets that were cool in the last game, including the assault rifle and the silenced pistol. To make these weapons more interesting you can attach several add-ons to each one to give them different capabilities. This ability to customize lends itself perfectly to Pandora Tomorrow’s game of finesse and makes the game just that much deeper.

The enemy AI is once again competent but flawed. Your in-game foes are smarter than your average bear, and they will notice your presence if you alert them in some way. The problem that Splinter Cell has is that the enemy behavior can be really random. Sometimes you’ll be three feet away from your enemies and they won’t spot you, while on other occasions you’ll be a hundred feet away and they’ll catch a glimpse of you.

Unfortunately the PS2 and GameCube versions of Splinter Cell do not provide quite the depth that the Xbox version of the title can provide. Several levels had to be tweaked to work with the hardware and because of that, there’s less options on how to get through certain situations, constricting you to play in a fashion more akin to every other stealth game on the market. Also the lack of power in the PS2 and Cube hardware makes it so there has to be fewer enemies, so the game becomes considerably easier.

Another problem that the other versions of Splinter Cell face is the length of the load times. Like previously mentioned Pandora Tomorrow is very much trial and error, so you’ll be reloading your last save quite often. On the Xbox this isn’t any problem with the hard drive, but with the PS2 you could study for finals during the time that it takes to load.

Still, Splinter Cell is a great game and while these problems can be bothersome they can be ignored. And if you’re playing the Xbox version you won’t experience any of this. If your only system is a PS2 or Gamecube though, know that you’ll have to deal with these flaws if you do purchase the game.

To give Ubi Soft Shanghai some credit the online modes that made Pandora Tomorrow such a must-buy on the Xbox remain intact here. Pandora Tomorrow’s take on online play is really intriguing. Essentially you play as either a spy sent in to infiltrate an area or a Mercenary charged with patrolling the area. The spy’s have an array of gadgets and the mercs have plenty of firepower – and the mercenaries play in first-person. The whole game is enjoyable with good friends as teamwork and communication will go a long way.

Graphics wise Pandora Tomorrow is solid. The animations, though largely recycled from the first game, are smooth and lifelike. The lighting is still breathtaking, all though some of the effect is lost on the PS2 and Cube versions. This can be somewhat of a problem as its hard to figure out what shadows are dark enough for you to hide in, but still the problem isn’t something that is seriously difficult to ignore. Character models are detailed and so are the environments.

The audio to back up the game is mostly above average. Michael Ironside once again brings Sam Fisher to life brilliantly with his gravely deep voice. The dramatic score does a great job at creating tension and drawing you in just a little more. Subtle audio effects such as footsteps and dripping water are presented too in the utmost of quality. The only gripe you could have with the game’s audio has to do with the secondary characters voice acting, as it’s very amateurish and takes away something from the stronger performances in the game.

In the end Pandora Tomorrow is sweet on all platforms, even if some compensations had to be made because of hardware. The game’s sweet online features and engaging single-player gaming are still reason enough to give Sam Fisher a spin on whatever system you own. Just remember if you do pick up the game that you’re going to have a bumpy ride at times.