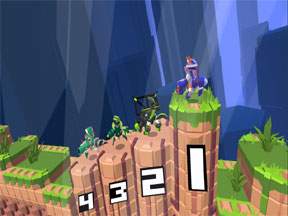 Megabyte Punch is a game that’s up on Steam Greenlight that answers a question everyone has been wondering: What if a game mixed Custom Robo with Super Smash Bros.? What do you mean no one else has been pondering this? Well, even if you never thought of what that would be like, Megabyte Punch can still wet a thirst for a game you never knew you even wanted.

Anyway, in Megabyte Punch, players control a small robot that ventures through retro-seeming 2D worlds, meeting and defeating various enemy robots in 2D beat ’em up fashion to collect their parts and add them to your own ‘bot. This collectible aspect – gathering parts to add them to your own character – adds a lot to the game when you consider that different parts will also gives you special attacks that you can assign and utilize to help you eliminate the foes you come across, or traverse terrain more quickly.

Combat is handled about how one would expect: Players have access to a variety of attacks, including a basic combo attack by pressing the punch button while holding no directions, and holding any one direction modifies the attack into single, more powerful hits. Aerial attacks benefit from this as well, with the direction-neutral aerial attack being a quick way to rack up damage on foes that won’t sit still, while all the others launch foes away.

Rounded shields pop up at the press of a button, begging a Smash Bros comparison yet again, while the Taunt, which is a robotic pelvic thrust (domo arigato!). Adding to that, special attacks can be assigned and have a good variety, from obtaining a flying ability that can make getting around levels a breeze to a spinning wind-up kick that, if it connects, will eliminate most of the mook enemies in one hit.

The largest thing separating Megabyte Punch from other beat ’em ups is that there’s no health bars: Damage is collected in a numerical value in the corner and as you take hits, you’re launched further and further. Get struck by a hard hitting attack at 25 points of damage? No big deal. Get struck by the same move at 150? You’re probably going to fly into a wall and explode, dying. That’s how you win and lose in Megabyte Punch: You either knock your enemies off the stage or send them flying into walls with hard-hitting attacks by building up their damage. In boss battles and versus games, players can actually see what damage their opponents are lugging around to better plan which attacks to utilize. Outside of those modes there isn’t much of a way to tell, but most of the enemies otherwise found in the stages in the single player story mode are kind of weak and die in three to five hits anyway, negating the necessity to see the condition of enemy health.

Of course, one of the things that makes playing beat ’em up games fun is co-op. So it’s a really good thing Reptile’s Workshop included that in Megabyte Punch as well! Up to four players can play local co-op and enjoy what the game has to offer. With even just co-op, being able to customize all the various parts of your robot to your personal liking is sure keep people playing for some time, especially when parts can improve your stats with bonuses like giving you 10% more movement speed, additional damage per hit or just give you the ability to clobber a foe with a hammer and launch them into walls with ease. This Custom Robo-like customization setup even goes a step further and throws out color schemes for you to unlock, giving you yet another thing to play through levels to find and collect.

For what it’s worth, Megabyte Punch does include an adventure mode, in which you play through the story which is mostly an excuse to have you go to the first level to obtain an arm part that will let you make your way through to the second level by drilling through walls, that sort of thing, and gives you lots of mook enemies to destroy and (hopefully) collect new parts. If playing through the story mode isn’t good enough, you can jump into the tournament mode which can unlock rare parts to use in the adventure mode, or try the versus mode and play against your friends.

The music is quite well done and very fitting for the title: It’s done in a very retro style, but is obviously more complex than anything an 8-bit machine would have been able to produce. A good number of indie games try to do retro-styled soundtracks before and wind up not making anything catchy at all simply because the music was focused on being retro for the sake of being such – letting simplicity get in the way of creating something audibly pleasant. Megabyte Punch does not do that, and the soundtrack is much better for it.

The graphics, similarly, are simple in style on the surface, but the high resolution polygons are still pleasant to look at simply because the animation is smooth and they’re not splotchy. The graphics are nothing outstanding, but they work and are not a pain to look at in the slightest.

To summarize: Megabyte Punch is a fantastic little game that combines a lot of elements into one cohesive, and enjoyable, package. The addictive collecting aspect plays quite well with the concept of having no health bars in a beat ’em up, forcing players to knock each other off platforms or into walls to win. A concept that wouldn’t have initially thought to be so well married forms an extremely entertaining game that’s sure to delight a good number of players.