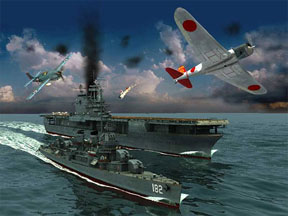 It tends to be a general rule in combat that the more firepower you have, the more likely you are to win a battle. And when it comes to firepower, there are few weapons in the world that can rival the massive guns of a well-equipped battleship. These floating fortresses have captivated and fascinated people for decades, spawning countless games from the original board game all the way to tactical strategy computer games. Battlestations: Pacific is the latest game to bring battleships off the high seas, and right onto your television or computer screen.

Battlestations: Pacific is the follow-up to PC and Xbox 360 hit Battlestations: Midway. The game allows players to control battleships, planes, and submarines in historic and what-if scenarios. While the game claims to be a strategy/action hybrid, it becomes clear very quickly that this game is more about action and less about strategy.

Players have the option of playing one of two campaigns. You can choose the Americans and begin the campaign toward the middle of the War in the Pacific, or play as the Japanese and go from the very beginning. The American campaign is historically-based, while the Japanese campaign allows players to see what would happen if the course of history were a bit different. Whichever side you choose, the game plays the same, and you’ll find yourself using similar strategies.

Each battle is fairly cut and dry. There are a set of main objectives to complete, and secondary objectives that don’t need to be completed, but offer a reward if they are. With the press of a button, players can switch between planes, battleships, and submarines, each with their own unique purposes and strategies.

Different situations call for different tactics. For example, when trying to take out an enemy aircraft carrier, it can be particularly difficult to get in range and drop a bomb with a plane since enemy aircraft are buzzing around, eager to dispose of you quickly. In this case, it’s a good idea to switch to one of your battleships and break out the artillery. Aircraft carriers may be big, but they aren’t meant to take hits from the artillery barrage that larger battleships can deliver.

Situations like this are the most common way players will have to strategize in Battlestations: Pacific. While it is possible to give your units commands, it’s generally more effective to just switch to the unit you want to take an action and do it yourself.

On top of that, there are times when commands flat out don’t work. I had one scenario when three Japanese ships (all much larger than mine) were charging full steam ahead. Despite giving the command multiple times to turn around, and even manually switching to the unit, my battleship was hell-bent on charging straight into the mouth of the volcano.

Overall, the gameplay isn’t anything overly spectacular, but it is solid. And after getting the hang of it, I have to say that there isn’t anything more satisfying than getting a target in range and launching off a 20-shell artillery barrage, then watching it rain fiery destruction down on the helpless target.

But while it is a great feeling to take out an enemy vessel, the graphics don’t do the game enough justice. As the ship takes damage, smoke rises and debris flies off the ship into the water. But all the while, sailors are strolling around the deck of the ship at a leisurely pace, seemingly oblivious to the fact that dozens of highly explosive artillery shells are obliterating the vessel around them. It’s no wonder they’re not worried, though, because upon closer inspection, you’ll see that they’re somehow impervious to any and all weapons. If you hit a sailor with an artillery shell or two, he just keeps on strolling around, not a care in the world. Other than that strange issue, the game doesn’t look bad, with special attention given to the nose art of the planes.

The sound doesn’t do anything to aid the graphics, though. There are the standard explosions and the roar of engines, but nothing overly impressive. There are, however, some terrible attempts at story-telling that will have you screaming at the voice actors to just shut up and get on with it. These weak attempts at story telling are less of an issue with the game and more of a minor annoyance, though.