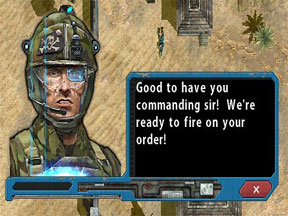 There comes a time when a game genre evolves to the point that we forget what the past was like. Real time strategy is one of those genres. We all got caught up in the Command and Conquer titles or Tom Clancy’s Endwar. Sure, those games are old now by industry standards, but are not what Isotope 244 wanted to go back to. They wanted to turn the clock back even further, to an era when real-time strategy was new. And since I happen to love that genre, as do many of you I’m sure, I was excited to get Machines at War 3 deployed.

When I first loaded up Machines at War 3, I was really curious to see how this game would play out. One thing is that there are very low system requirements, yet the game looks really good. Retro is the in thing these days, but I’ve not seen too many wargames try to turn back the clock.

The game starts out with a tutorial mission, which is probably a very good thing given that you may not remember all the control mechanisms of the older games. I was grateful to find it, especially since I was originally disoriented by the top-down perspective.

All awkwardness aside, the tutorial mission was very informative. Each command that I needed was explained in detail and showed how I’d need to use it. During this mission the directions were issued by a picture of a woman. Every inch of that display brought me back to 1998. I really kind of liked it. You can tell a surprisingly good story using still graphics, and the way the people were drawn gave them a lot of character.

Upon completion of the mission, I got to start the main campaign. The story places you in the role of a newly appointed commander for a special task force. Your first mission is to track down a missing scout who held important intelligence. You are told that the Russians are just as interested in the information as you are, so time is of the essence.

Once I got through my first mission, I was happy with how everything handled. All of the commands worked properly. The controls were completely functional and I never ran into a single error.

Diving into Machines just a little bit further, it was great to find a pretty robust AI as well as a support structure for the game. Almost every stat you can think of as important is tracked. At the end of each mission, you will see where you spent your money, what your hit and kill ratios were, how you outpaced or were outplayed by your opponents, and lots of other useful data. It’s a lot more information than you normally get with a real-time strategy title, and I can imagine if you use it well, you can self-improve your gameplay each time and become a pretty competent player.

I was slightly disappointed in the audio as a whole. The music was generally lackluster and eventually I couldn’t even distinguish the music after awhile. Sound effects also lacked a certain pop. All of the gun shots and explosions were missing that critical power behind them. But this is an indy game I guess they had to concentrate on other areas. Still, the sound is passable, so not too bad.

Graphics wise, this game looks like an exact replica of a throwback strategy game. It’s akin to something like Dune or the original Warcraft, back when that was still an actual war game. There was a sort of archaic feeling to it that was quite refreshing. The top-down perspective was done quite well and the vehicle qualities were really well detailed. I was only sad I didn’t have access to artillery to really blow apart the world. And even though things didn’t look modern, the style used in MAW3 is unique and done quite well.

As a whole if you want to play an old school strategy game Machines at War 3 is the game for you. With a great story backing up the old school feel, developer Isotope 244 hit the nail on the metaphorical head. I give Machines at War 3 an above average 3.5 GiN Gems and look forward to many more long campaigns in their created world.