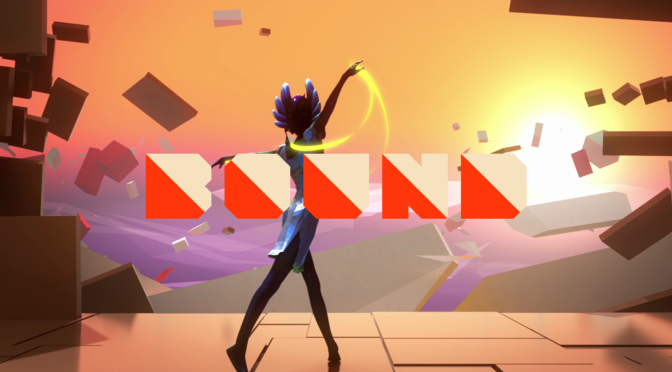 Bound is the psychedelic ballet platformer, developed by Polish studio, Plastic, for PlayStation 4.  The visual style, combined with a fluid sense of motion makes Bound like nothing you’ve ever played before. The minimalist gameplay and lack of a fail state might put some players off, but if you enjoy exploring abstract narrative landscapes, then Bound could be the game for you.

Published by Sony’s Santa Monica Studio, Bound follows in the footsteps of Journey and Unfinished Swan, sharing the same focus on experiential gameplay and storytelling. With that in mind, don’t expect a traditional platformer with collectibles and a limited number of lives with a ‘game over’ screen for the final fail. Instead, Bound will make you feel like a dancer in a trippy dreamscape.

You start on a beach, as a pregnant woman in a blue dress, contemplating the horizon. She’s holding a notepad with a drawing of strange figures on each page and by gazing down at the picture, you’re sucked into a different world. This is the world of Bound.

Inside the alternate world, you play a sort of princess, whose mother commands her to protect the kingdom from the Monster who is trying to destroy their world. The princess moves like a ballerina or rhythmic gymnast. Ribbons flutter as she performs grande jetes and pirouettes, which are a joy to behold. Even when you fall, she rights herself with an elegant arabesque.

Start playing right now with a digital code of Bound from Amazon!

The world itself is an undulating, pulsating castle in the sky, with echoes of Escher and at times Mondrian and even Dali. Platforms move and dissolve, if you miss a jump, but you materialise where you fell, so there is no death in Bound. Walls quiver and half disappear when you push against them, hinting at the path on the other side and graphics glitches of games of yore.

Bound is about leading you on a journey through the fantastic world, rather than creating hurdles to slow your passage, as traditional games do. And what a world it is. I can’t overstate how gorgeous Bound is. It is a VR game too, so it’ll blow your mind, once Sony launches its headset. The lighting creates a stark, noirish feel to this dazzling, dreamscape of floating ribbons, baubles and flat polygons.

The aim of the game is to keep moving and defeat the monster by dancing. Small flocks of darts or paper aeroplanes attack, halting your progress, but a few pirouettes and jumps will bat them away long enough for the dancer to move on.

Expert platform gamers may be disappointed by Bound, as there is no punishment for missing a jump. You don’t lose a life, you simply respawn and try again. There are gems to collect along the way, but they don’t serve any purpose, other than giving you a trail of breadcrumbs to follow. Then there are moments of sheer pleasure, when the ceiling becomes the floor or you fall, only to land on a ribbon in the air or tumble onto a floating sphere.

The puzzles themselves won’t leave you stumped for long, but the developers do leave players to discover the game and its mechanics without a tutorial. It’s up to you to uncover moves, such as bouncing off opposing walls to climb them and the super jump, which I only found by watching a developer play-through.

On your first play, Bound feels like a fairly linear affair, but each level can be played in any order. Depending on when you play them, levels change, opening new paths and adding different environmental effects, such as rain. This creates a strong reason to replay this otherwise very short game. You can finish Bound in an afternoon or faster, on the speedrun, however, Plastic claims there are 120 level combinations, so it’s a game you can return to over and over.

The feeling of being a dancer is an absolute joy. The choreography is superb, but I do wish that we had more moves to play with. The central dancer is so graceful, but her moves are just window dressing. You do need to dance to defeat the monsters, but the foes don’t actually attack or pose any real threat, they just hamper progress, making the need to dance feel a bit hollow in these end of level sections.

That said, without the dancing Bound would be a half the game it is. I would just cross a room in a string of pirouettes, just for the absolute pleasure of it. The movement is so silky smooth and the ribbons swirl around the figure, accentuating her arc. But I can’t help feeling that we should be able to string moves and discover new steps. This would have elevated Bound from a good game to a great one. It’s an odd omission and feels like a missed opportunity.

Bound is a narrative driven game and the mystery compelled me to the end. The female figure dances through the fragmented inner world of the woman on the beach and each level reveals a memory. It’s a neat metaphor, so it’s no surprise that modern art and surrealism is the visual inspiration for the world. Bound is a game about family and memory and moving on, which is why the minimal gameplay and lack of challenge makes sense.

Bound isn’t perfect, but it is one of the most visually arresting games I’ve ever played and for that alone, I recommend it. The beauty and feeling has to be played to be believed.