My First Drone is best described by the description on the box, which refers to it as a UFO Air Hover Drone. This toy is only a drone in the sense that it flies around, but it does so autonomously, which does make it seem more like a UFO with a mind of its own. It’s absolutely just a toy. There is no flight control and no creepy camera for spying on the neighbors. In fact, you should never take it outside. Let me explain why. 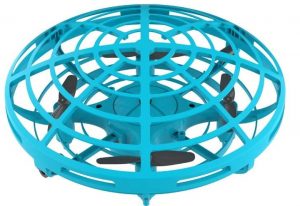 The drone arrives well packaged like the other My First toys I’ve reviewed. The instructions are simple but critical. The drone has to be charged to be able to fly. It arrives with a charge, but I didn’t find it robust enough to actually fly the drone. Charging takes forty minutes, which will then give you seven minutes of flight time, seven very amusing minutes. To get the drone in flight, all you have to do is turn it on, put it flat on the palm of your hand, drop your hand, and it will pop into the air with all four propellers spinning.

Flight sounds like a small swarm of large bugs. It’s surprisingly loud for such a little thing. On the bottom of the drone there are sensors like the ones that keep robot vacuum cleaners from bumping into walls. Just like with robot vacuum cleaners, these sensors are better at sensing some colors than others. It’s best to let the drone fly around in a well-lit room. It doesn’t sense dark objects well.

[amazon text=Take off with your own My First Drone from Amazon!&asin=B07P3HGWQK]

For example, in my sister’s kitchen, it flew around just fine until it didn’t “see” a dark photo on the wall and ran into it and then fell out of the air. Luckily, the drone is very light weight and isn’t likely to damage anything it runs into or falls on. Running into the ceiling is inevitable, because it doesn’t seem to have any sensors on top. For this reason, My First Drone is an indoor-only toy. Take it outside and you could easily lose it forever, depending on where you take it. 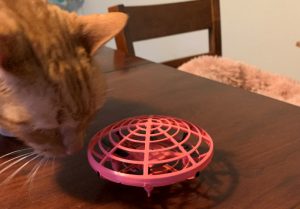 This is a toy of little brain, and a drone by only the broadest definition, but despite its drawbacks, it’s still pretty amusing. My mother and I have little dogs who found it fascinating and aren’t big enough to jump up and take it out of the air. My sister’s dog is large and we had to keep a close eye on him to make sure he left it alone. An encounter with any animal will not end well for the drone. By necessity, it is lightweight and relatively fragile. It’s designed for children ages six and up, but younger children, closer to six, will probably need supervision…and the drone definitely needs it.

Don’t leave this drone unattended, because it will get itself into trouble, which is sort of endearing. Because the sensors can sense a waved hand, you can play a kind of no-touch catch with it, which is a wonderful social distancing activity in these difficult times. Check it out and let us know what you think.