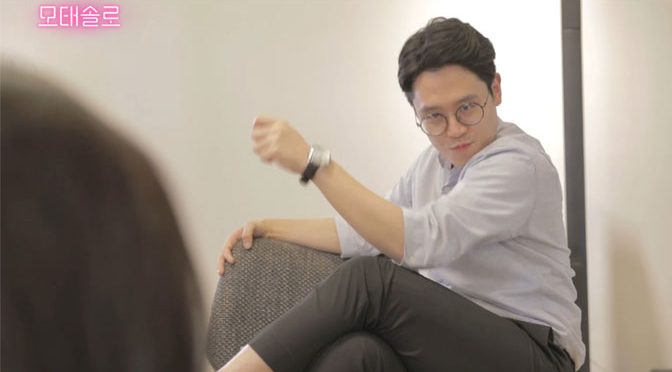 Motesolo: No Girlfriend
Since Birth

When you think of FMV games, you probably envision the genre’s staple features such as horror, suspense, science fiction, mystery and adventure. Motesolo is definitely an adventure, but just like the hero of this game, it is one that stands alone.

Motesolo: No Girlfriend Since Birth is a delightful and humorous look into the dating life of the game’s protagonist, Kimo Kang. The game is available right now on Steam. Motesolo’s Korean developer and publisher, Indicava, describes the theme of the game as: “Everyone was a solo when they were born. All of us were solo at least once. And someone even now.” Kimo Kang is a bit socially awkward, but is a nice enough fellow. He loves playing video games and watching videos on YouTube and Twitch. He is 29 years old and lives in the city of Seoul. He might not be the most stylish of dressers nor does he own the latest gadgetries as far as his phone and apps go, but he is gainfully employed and has a few really good friends who have his back. What he feels missing in his life is a significant other, and he is a man hell-bent on a mission in trying to fill this void. 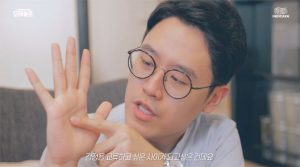 As mentioned, Kimo Kang is on the verge of turning 30 years old. He observes his friends with their girlfriends and boyfriends going out and having fun without him, and he even recently attended one friend’s wedding. This has Kimo especially feeling left behind and alone. Kimo really, really wants a girlfriend, but he has a big problem. He has never kissed a woman, held a woman’s hand or even had a girlfriend—ever. He is putting a lot of pressure on himself to resolve this issue as quickly as possible, and zealously plunges from the high dive headfirst into the dating pool. 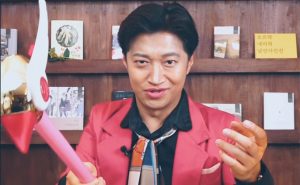 He searches for guidance wherever he can get it. He turns to his hysterically funny friend and drinking buddy, Sechi, for a shoulder to cry on and his version of dating advice. Kimo gets scammed by a dating service on his phone, but shakes it off and continues to use them in his desperation. He also pays a popular social media influencer’s channel tons of his hard earned money for hilariously bad personalized dating advice for the price. Another source of advice he takes comes from the self-help guru videos he discovered on YouTube of Dr. Casano: Love Sniper (whose videos you do not want to skip over due to their sheer entertainment value). 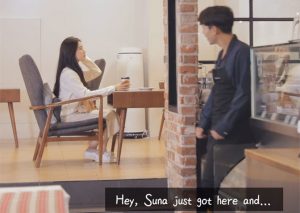 At the beginning of the game, you observe Kimo on a blind date at a café with a young woman. You get to listen to her describing herself and her interests. Then she asks Kimo what he likes. That is when you as the player jumps in to decide between two given choices on the screen for Kimo—if he’ll speak about his love of working with pipes, or if he’ll bluff his way through how he loves to work out. This introduces players to how in the game they’ll be either trying in earnest to assist Kimo or setting him up for certain (sometimes hilarious) failures for their own amusement. The dialogue in the game is mostly all in Korean, but there are English subtitles. The interface is also available in English. This may sound tedious to some in having to sit and read everything, but honestly, I got so wrapped up in the game that I did not even notice this as a task whatsoever.

Sadly, the date doesn’t go so well, and he seeks solace from a bottle of booze and Sechi. His friend Sechi tells him not to worry because he’s going to set his friend up on a blind date. He promises he’ll share with him lots of dating advice so Kimo will win this girl over. 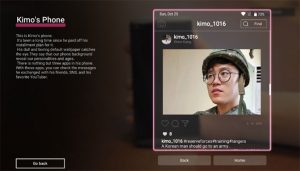 The game at this point introduces you to Kimo’s phone. His phone is described by the publisher as a Mini Game (within the game). The game mentions that it’s been a long time since Kimo paid off his phone (clueing you in that his phone is way past its prime in functionality and hipness). Kimo has only three apps on the phone. There is a messaging app, an SNS app and a video app.

With the messaging app, it shows you all of the texts that Kimo has been receiving. There are texts to and from blind date and dating service matched bachelorettes, his friends, his boss at work, a dating app’s messages, messages regarding his bank account balance, spam, etc. You can read through the provided texts and decide if you want to continue some of the texting conversations. When you are allowed to do so, the game provides two or three possible responses for you to choose from for Kimo to continue in those conversations. How you choose for him to respond influences how those he’s texting to will respond back and may even have influence on the course of the entire game (with Kimo’s big upcoming blind date). 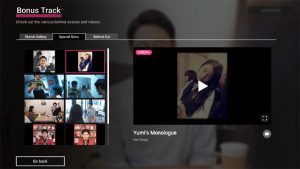 The SNS app provides you with a social media site that you can read and look at photos from entries about Kimo and his friends’ lives. If you take a good look at the main page of that app, you’ll notice at the very bottom of the page that Kimo has apparently done a little reconnaissance work in preparation for his upcoming date with Yumi Kim.

The last app on his phone is a video app. From there, you’ll see that Kimo has access to Namgyu2’s (the previously mentioned popular social media influencer) channel that he pays for personalized dating advice. You’ll also find Dr. Casano’s YouTube “Manner Maketh Man” video. These are both available for Kimo to get dating advice from and for you to watch. 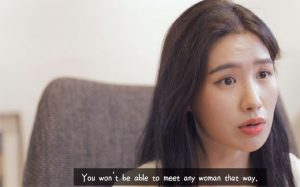 As promised, Sechi has set Kimo up on a blind date with a friend of a friend of his. The young lady’s name is Yumi Kim. Through texting one another, they decide on a day and time for their date. Yumi has recommended they should meet at a particular trendy café that she likes. When the day finally comes, Kimo arrives at the café early as he is so excited and nervous for the date to begin. He sits at a table and waits for his date to arrive. He kills time by looking at the contents of his phone. This is where the game play really falls into the hands of the player. From this point forward, the player guides the decisions for Kimo’s actions and conversations. 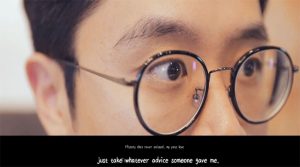 When Kimo is in a conversation, you as the player are offered two or three choices at times as to which topics you’d like to have him engage in, or what answers you’d like to have him act on. Often, when it is time for the player to make a choice for Kimo, advice that he has been given in the past regarding the conversational topic and possible choices in discussion are thrown up on to the right side of the screen on a notebook looking graphic with videos from Kimo’s dating advice contributors. You as the player can watch the videos and decide if you’d like Kimo to follow any of their advice. 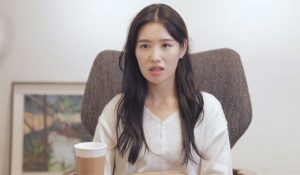 You might make what you are sure is a sound decision in game play for Kimo to follow, but you’ve got to remember that he’s a bit of a loose cannon. Kimo is nervous, hyped up about the date and naturally socially awkward (especially around people he doesn’t know well), and this all contributes to the hilarious consequences on how he executes your choices for him at times. Kimo can come across as endearing, nerdy, arrogant, work-focused, bluffing, eccentric or sincere in conversation (or a possible combination of two or more of these) depending on the choices the player has made for him. 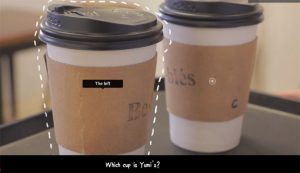 Not only is there choices in conversation for the player to interact with, but Kimo’s environment is a big part of the game play. There are opportunities for Kimo to interact with people and things in the café environment. These conversations and objects can have a big effect on the course of the date and game. You should be certain to explore the café environment when given the opportunity. Kimo’s phone is also a very important tool to remember in game play. The texting conversations and social media information you uncover are very helpful to apply to your date. These things can all contribute to the success or failure of Kimo and Yumi’s potential relationship. 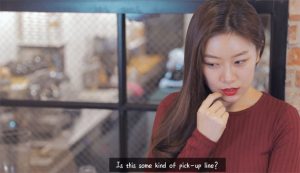 The game has around ten endings, and these can vary wildly from hilariously bad to heartwarming and good. There is a lot of replay value as you try different things, interact with other objects in the café and do greater social media research. For having such a seemingly simple premise, the game has a surprising amount of depth. There are lots of hidden gems within this endearing game, and it is unexpectedly addicting because there is so much to uncover. 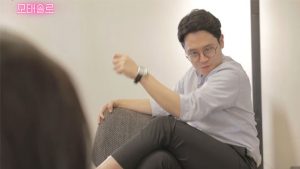 I had a lot of fun playing Motesolo. It’s a game with a lot of heart and hilarity. It should appeal to any players who enjoy FMV games of course, but also dating simulations or any title whose biggest strength is its good story.

Motesolo earns 4.5 GiN gems overall. Check it out if you are looking for something a bit different and fun in a new FMV game.