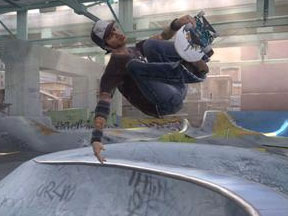 Skateboarding is the ultimate test of coordination and bravery. On one hand, skateboarders must keep their balance at all times or else they fall. On the other hand, skateboarders must also constantly push themselves to come up with new, more spectacular stunts that will impress their legions of fans. There was no skateboarder better at either of these areas than Tony Hawk. Unfortunately, the Tony Hawk games have failed to push the envelope much in recent memory.

One of the first things that players will note when they start playing Tony Hawk’s Proving Ground is that the game feels the same as the last several installments. There are some additions into the game that set it apart – but only slightly. One of those additions is what is known as the Agro kick. It allows players to get a considerable amount of speed built up by correctly timing button presses with the motion of the skateboarder’s leg. But while this made clearing large gaps easier, it did not really feel like something that the developers put a lot of time into.

The lack of new features does not just apply to the gameplay, itself, though. Another problem the game has is its story mode. This is supposed to be the part of the game where players are able to customize their own skater and live their lives moving up the ranks just like a professional skater would. Unfortunately, rather than provide an exciting experience, Tony Hawk’s Proving Ground simply reasserts the belief that sports games should not have stories.

One key problem with the story is the characters. They characters that you run into in the game are perfect examples of the word stereotype. There’s the middle-aged camera man who stands on the street all day waiting for great skaters to come by. Then, there’s the guy who just cannot seem to nail a trick and needs you to show him how it’s done. The list goes on and on.

The voice acting is also uninspired and lacking emotion. The only reprieve comes when a professional skater makes a cameo. The pro skaters have quality voice acting and act as though they would in real life, with many of the same behaviors and emotions.

Beyond the problems the game has with its poor story, there is also a noticeable lack of imagination when it comes to the environments. While skating in a city, for example, you may see several different locations to grind, but all of them look similar to one another. Or, you may see a moving car that looks more like an orange square on wheels.

There is a feature that allows players to build their own ramps, but there is not much detail in it.

The main reason the players will want to build their own set-ups is because of photo spots. These places allow for players to skate through a camera icon and have their picture taken. Then, players can save their picture onto their hard drive.

There are also objectives, such as taking a picture while jumping over a car, which allow players to get more gear for their skater. Video opportunities also present themselves in a similar fashion.

Despite the fact that the game has some new features, there is not a lot that it has to offer fans. This is the game’s inherent problem; it feels like an addition to a previous game rather than a new, stand-alone game. Many of the objectives in story mode require that players pull off tricks that only a seasoned Tony Hawk fan would know. The learning curve for the game is steep for new players and many times players will feel as though they are skating around without a purpose. There is also the issue of getting used to "Tony Hawk physics" as I like to call them.

Overall, Tony Hawk’s Proving Ground doesn’t deliver. It feels like an unoriginal game that is simply capitalizing on the great skateboarder’s name. The series needs a new twist to it, or else it runs the risk of being the same game over and over. (I’m looking at you, Dynasty Warriors.)

Tony Hawk’s Proving Ground gets 2.5 GiN Gems out of 5 for being an unoriginal contribution to the gaming world.