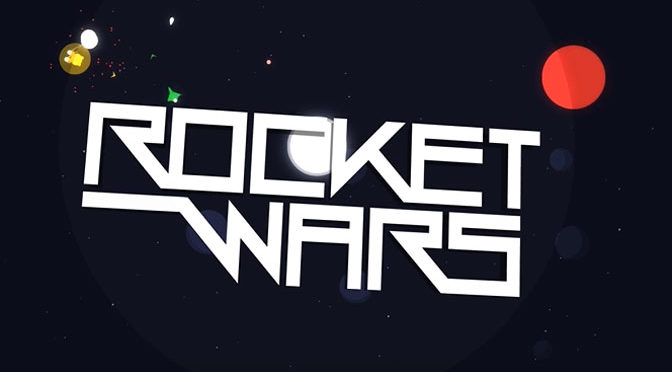 Local multiplayer is truly an experience all its own. Whether it’s you and a friend bashing each to a pulp in Mortal Kombat or trying not screen peak (or at least hiding doing so) in Halo there’s just something fun about being in competition with friends. Indie developer Archon Interactive decided to take a shot at striking the coal with their chaotic arcade shooter Rocket Wars.

Rocket Wars is a rather straight forward arcade shooter; you and up to three people or AI opponents go head to head in one of three different game modes in a space ship of your choosing. The core three modes included classic death match, a survivor mode, and a sort high value target mode called Nuke King where one player poses a greater threat to everyone else and the role changes depending on whoever kills the Nuke King. Each of these modes also includes a co-op version in case free-for-all isn’t your style. 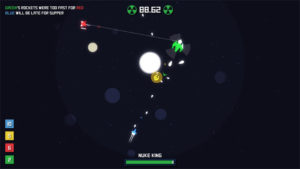 The gameplay experience within in these modes, second-to-second, is largely the same. You fly around, in an almost comical continual spin as you try to pick up power ups and destroy other players. If you’ve ever played Starwahls you will have a good idea of how this game handles. You generally do your best to pilot your seemingly inebriated aircraft, drifting it around the large angry ball of fire in the center while also avoiding going out of the zone all together.

The near-uncontrollable nature of the piloting is both good and bad; to its credit it makes the game feel much more arcade-like while to ill repute it can quickly become agitating as it often feels like you barely have any control of your ship for any meaningful amount of time. The controls, while simple, are very loose and often feel entirely dependent on how you handle the piloting. 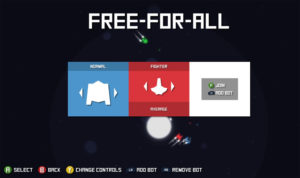 With six buttons being used in total, three for movement and three for action, it isn’t hard to know what you need to press, but rather how to get to the point that you should press it. The result is often a ruckus of holding down the fire button while hoping you don’t accidentally drift into the sun.

Adding to the chaos is the power up system which is generally about being lucky enough to lurch yourself in the direction of whatever is popping up at the time. These power ups include shotgun blasts, sniper rounds, and lasers amongst other things. 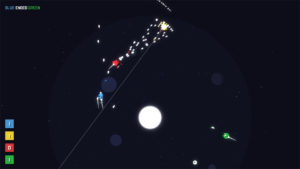 Then finally you have a choice of twelve ships to unlock, each one offering a different experience. However, the change of experience isn’t in how you play, but how likely you are to win. The biggest problem that faces Rocket Wars is the lack of ship balance. It is made almost painstakingly clear that some ships simply can’t compete with others. In my experience, I found that any lighter faster ship was generally useless against anything with more health and mass. This problem becomes more and more noticeable as you play, in large part due to the game’s lack of replay value. The lack of truly interesting and different things to do wears you down rather quickly as the chaotic gameplay becomes more taxing than entertaining. While fun in short bursts, the gameplay side of Rocket Wars doesn’t leave much to chew on. 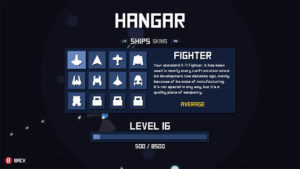 From an artistic side, Rocket Wars is solid. While not stand-out by any means, the bright colors and simple shapes, alongside the frequent sprites, make for a visually pleasing if not straight forward experience. It likely isn’t anything that you haven’t seen before, but it shows what it has well and keeps things visually engaging.

The audio side of things however, is a little more noteworthy. With a fun fast face paced techno EDM soundtrack alongside simple but fitting effects for guns and explosions, the game nails its sound design. Even in times when I was less than engaged by the gameplay, the thumping and pumping of the sound track would engage me to play one more round. 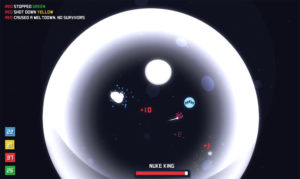 As a whole Rocket Wars isn’t a stand out game, but it also isn’t a bad on either. Gameplay is simple and fun if not a little wild and repetitive. The visuals are fitting and keeps your eyes, while the soundtrack does a great job keeping you at least engaged from an auditory standpoint. Overall, for 7.99 Rocket Wars is a good choice if you’re looking for a cheap and fun experience wrapped in a little space ship chaos and combat with friends.