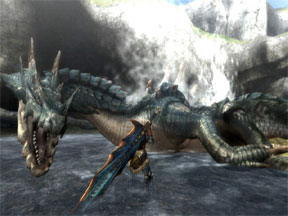 Monster Hunter is a series that I was always on the outside looking in. This Capcom classic normally was on PlayStation, and since I was an Xbox guy I could only watch my cousin play it. But I saw how much he loved it, and how popular it was, so needless to say, I was excited to finally own an installment in this legendary series.

I first messed with the original game on my cousin’s PSP. I enjoyed it, but had some issues with the controls and camera, so I was focused on these issues as I started my new game on the 3DS. Of course the fact Monster Hunter 3 asked if I had the circle pad pro attachment for my 3DS made me a little wary.

The game opened up with a very well done cut scene. Graphics were nothing short of stellar, and the music was great. It showed a lot of monsters and hunters clashing, and overall I was impressed with the special effects. It really makes you want to take up the monster hunter mantle, and join the ranks of all those who came before.

My first actual gameplay was when my character ended up on an island as part of the hunter’s guild. After introductions, I started on my first mission/tutorial in the nearby forest. Each and every step of the way I was given an adequate walkthrough for the controls. For anyone who is not a Monster Hunter guru like me, this tutorial is very informative.

The story was nice and simple. You get dropped off on an island to help the residents get rid of their monster problem. Of course, fresh off the boat you aren’t going to immediately challenge the big, bad monsters right off the bat. So as you complete the lower missions you get experience fighting slightly smaller pests, both on land and in the ocean.

One thing I really enjoyed was the diversity of the weapons you can use. Very few games have this level of customization. Personally I was happy I got use a lance and had no qualms carrying the behemoth weapon around.

Of course I did run into one major issue. Often times while in a fight with a big monster I would hit the dodge button and for some unknown reason my character would dodge into the beast instead of away from it. Also, during battles the camera will get turned around and you have to fix it manually due to the quick command not working. But these are odd little quirks and not game breakers by any means.

The graphics in Monster Hunter 3 are absolutely gorgeous. All of the scenery as well as the monsters are really well drawn. Every detail was exact and even the blood splatter looked good. This is hard to accomplish on a small 3DS screen, but its done perfectly here.

Monster Hunter 3 had a great musical score to go with the graphics. Music seamlessly switched between relaxing and intense whenever a large monster showed up near you. In addition, the sound effects really add a whole new dimension to this game in terms of realism. Weapon noises and combat sounds make it feel like you are there fighting the giant monster.

The touch screen is also used to great effect for access to in-game books, weapons, field maps and mini games. On the 3DS, players can exchange their guild card that contains all their hunter’s information with other players via StreetPass. So I don’t just feel like I’m part of a guild now, I really am in one, with a record of all my accomplishments.

You can play Monster Hunter alone or in four player local play using the 3DS. And the 3DS search feature can help you find nearby players, which is good if you happen to be in a densely populated area, or have gathered friends for a night of gaming. Even if you are by yourself, the game provides two kick-butt companions, Cha-Cha and Kayamba, who are great to have along in a fight.

If you love the thrill of the hunt, or being part of a guild of monster slayers, then Monster Hunter 3 is the game for you. I can finally see why so many people love this series. With it’s blend of violence and story it forms a solid title every 3DS owner should have. I give this title a solid 4.5 GiN Gems.