Monster Hunter is one of those special kinds of slow burns: In each new iteration, players are given gathering quests in which they acclimatize themselves to the controls and manner of play. Not long thereafter players will partake in hunts against fire-spitting birds that are several times the height of the hunters, and at some point beyond that, hunt gigantic a cephalopod so immeasurably powerful that it wears the skulls of vicious Elder Dragons from previous Monster Hunter titles on its tentacles. Generations, as its name would imply, is a greatest hits album, celebrating years of continued success in a storied franchise, and while it simultaneously brings a lot of mechanics to the table that change how players approach hunts, the classic gameplay is still underneath, safe and sound. 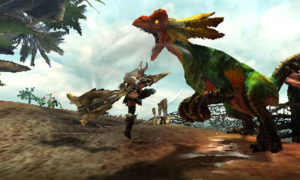 For those unfamiliar with the Monster Hunter franchise, it’s a series of action adventure games, even RPG-like in nature, in which you create a character referred to as a hunter, who tackles the large beasts that would otherwise cause trouble for the peace loving people of the world. If a monster constantly sneaks in and slaughters a village’s livestock, you are the one who will receive the quest to kill it, and then craft a very fashionable hat from its remains. A constant loop of gathering herbs, ore, and monster parts ensues, in order to always be ready with a belt full of Potions to keep yourself healthy while you take on increasingly difficult monsters in order to make better equipment to take on even stronger monsters.

Dare to take on the best 3DS title yet? Grab a copy from Amazon!

Defeating and capturing monsters is literally the name of the game in the Monster Hunter franchise, and the grinding toward your next set of armor or weapon is typically what has players investing hundreds of hours into each installment. A quest may arrive to kill a Khezu, a pale monstrosity that emits electricity in powerful bursts, but if the armor you last made is weak to electric elements your character will take more damage and be stunned more often, which can make beating the quest quite difficult. To overcome this challenge, you can keep trying until you eventually succeed, monkeys and typewriters style, or you can go defeat a somewhat easier monster, the Gypceros, and craft armor out of its rubbery hide and gain a significant electricity resistance, making it much easier to hunt the Khezu.

This is the grind of Monster Hunter: You’ll always be working toward new equipment at all times. You’ll be constantly seeking out more Dash Extracts you need for stamina-boosting Dash Juices, it’ll be fighting your tenth Rathian in a row to finally receive that Tail Spike you needed to upgrade your weapon. This has quite the addictive quality to it, which is great since it keeps you playing a quest multiple times and better learning the monster’s attack patterns each time you fight it. See, Monster Hunter, for those uninitiated, can best be viewed like a series of boss fights- every monster attacks in specific ways, though it introduces more and varied attacks as you progress through the game, so learning them at low rank is an absolute must for those bad at action games. 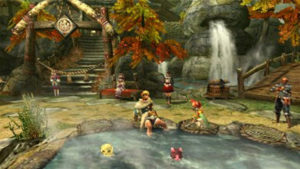 Generations introduces quite a good deal for a celebration game- longtime fans will be pleased to see the sheer variety introduced by Hunter Arts and Styles, while newcomers may be a little overwhelmed. There are fourteen weapons in Monster Hunter Generations, fifteen if you count the Prowler, which is commonly treated as a separate mode where you play as a cat, though it’s different enough to be considered a new weapon and you can play with other Hunters as a Prowler. Each of the aforementioned fourteen weapons has access to four Hunter Styles, and how you play the game will dramatically change based on which Style you are using with your weapon. 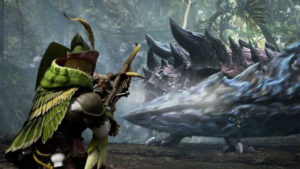 The Hunter Arts function like super moves, some affording great flexibility or power to your weapon, or even giving you an emergency dodge to abscond the hitzone of extremely dangerous attacks. Some are even large, flourishing special attacks that deal damage, though those are typically a little less useful than Arts that may increase your damage over a longer, set period of time- even though they do look quite flashy. The new Hunter Styles also transform how players can approach each weapon by a large margin- Guild style users will find their weapons largely unchanged from Monster Hunter 4 Ultimate and have access to two Hunter Arts, while Striker style hunters will lose some of their attacks in exchange for carrying three powerful Hunter Arts. Aerial style weapons use only one Hunter art, but gain a unique evade roll that allows them to spring up into the air for impressive airborne followup attacks that can more easily mount foes, and Adept style rewards players who dodge with proper timing by allowing them powerful counterattacks. 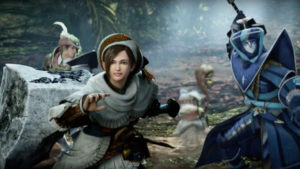 These Arts and Styles dramatically boost the ceiling for experimentation, and it’s a joy to see how each weapon handles in a different style. Players who first try out Dual Blades in Aerial style may be excited to see that they turn into a tornado-flurry of daggers while dodging into the monster’s side, while Bow users in Adept style can enjoy that their weapon is instantly charged when they properly execute a dodge through an enemy attack. Playing online, many times players will have entirely different armor sets, weapons, styles, and arts, so it’s a lot more varied than what you would have seen in Hubs in past Monster Hunter titles.

Online connectivity is where the Monster Hunter games thrive- playing with other people is always a treat, and Generations is no exception to this rule. The quests, especially at low rank, are a good deal easier in this iteration, though that’s only true up until the end of low rank. Players who want a good challenge will encounter more than enough to sink their teeth into with the new Hyper and Deviant monsters. 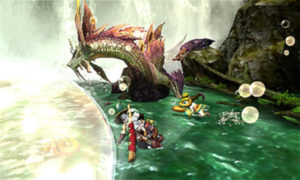 Deviant monsters are special monsters that have survived encounters with past hunters and have taken on new abilities. The Dreadqueen Rathian, for example, has such powerful poison capabilities that she can inflict a new Deadly Poison ailment that drains hunter health at an exceptional rate, and her tail creates clouds of poison all over the battlefield which makes hunter movement perilous if not done with caution. These quests at tenth level have some of the greatest challenge in the game, and uncoordinated hunting parties tend to be wiped out quickly if not careful.

The graphics of Monster Hunter Generations are easily some of the best on the 3DS. The 3D effect, while satisfying, can cause a little bit of slowdown when a variety of special effects fill the screen, such as Gore Magala’s frenzy particle-laced roars, but the actual textures themselves look very reasonable. The game itself runs in 30 frames per second, down from the 60fps of Monster Hunter 4 Ultimate, but the game still runs quite well considering it is on five-year-old hardware. The musical score is excellent, as per usual, as the various monster themes are well orchestrated and really bring the experience to life. Hunting Zinogre wouldn’t be the same without his powerful, blood-pumping track, which perfectly matches such a quick-moving and powerful monster. 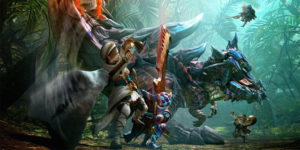 Overall, Monster Hunter Generations is a great addition to the franchise that adds a lot of new ideas to the plate. Those unfamiliar with the Monster Hunter series may be inundated by the wide variety of mechanics and sheer plethora of options to choose from, but there has never been a better time to get into the series. The difficulty curves upward at a more appreciable rate than in previous Monster Hunter games, though there is still significant challenge for those wishing to test their gaming mettle and skills. The inclusion of Arts and Styles adds a lot of customization and improves combat across the board, making this one of the most attractive entries into this series in quite some time.