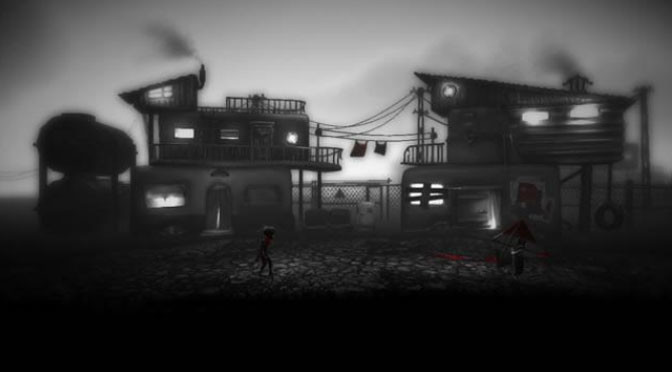 This is a cautionary tale of what can happen if you run away from your big brother. Or maybe it’s a cautionary tale about flying kites. Whichever it is, Monochroma is a beautiful and haunting tale of two brothers lost in the big, bad world.

The adventure begins in a trailer park. Patched together trailers and sheds teeter precariously atop each other, alongside tilting water towers. Washing hangs between leaning telegraph poles, and wind pumps turn idly in the breeze. Two brothers set off to fly their kite. The smallest rushes ahead and is soon lost from view, leaving the older brother behind. You are the older brother.

To catch up with that pesky kid bro, and the now runaway kite, you must move and climb objects, jump obstacles, shimmy up ropes and monkey walk along them. In the background, the kite is just visible in the dusty mid-west landscape, but somehow it stays always out of reach. Then, just as you catch Lil’ Bro trying to free the kite from the top of an old barn, dang it if the roof doesn’t break and you both fall through.

This, really, is where the story starts, because Lil’ Bro has hurt his leg and can’t walk. So you have to carry him. For some reason you can’t just go back, which is a good thing because that would make for a really short game. More than that, we’d miss out on the enchanting adventure that is Monochroma.

Nowhere Studios have created a truly engaging side-scroller with a difference. Monochroma, as its name implies, is rendered entirely in black and white. Entirely, that is, aside from subtle uses of red, which highlight important areas of the screen. The monochrome graphics, along with the electrical storm which starts soon after the adventure begins, apply a moody, dark atmosphere which would be otherwise non-existent in a fully colorized game.

Speaking of graphics, the artwork has a distinct 50s style, which edges just over the ‘normal’ boundary and slides a toe over the borders of the surreal. This off-key environment becomes more obvious as the game progresses. The non-interactive backgrounds are stunning to behold, enough so that I occasionally paused the gameplay just so I could stop and look at them. I’m not sure what the urge was to give this game a monochromatic look, but it certainly enhances the 1950s effect. The world of Monochroma also has a graphic novel feel, with too-tall tenement buildings, experimental labs and hellish factories. Without it being in-your-face, there’s a science fiction touch involved, which is borne out later in the game. Coupled with the old-fashioned noir atmosphere, this makes the game a curious mix of B-movie and Dick Tracey.

There’s no combat, despite the fact that the brothers have drawn the attention of a cigarette-smoking thug in a stripy red sweater. We soon discover he’s not after them because they stumbled upon his evil plan, but for another, more dire purpose. Whenever he appears, get ready to act fast. You can’t fight him, your only hope is to escape, and that might not be as straightforward as it sounds. It’s a good thing Mr. Thug isn’t that bright, because when he goes into one of his rages, he will often foil himself. So thumb your nose at him and run!

Nothing in Monochroma is straightforward. To progress you have to solve increasingly tougher puzzles which involve not only cleverness, but timing, agility and lateral thinking (or vertical, depending on the puzzle). While some of the puzzles do indeed need you to put your brain in gear, most of them depend on you finding the right sequence of moves in order to get your younger brother to safety before a room floods, or a piston squishes him, or something equally horrifying gives you a game over.

Through most of the game you will be carrying Lil’ Bro on your back, but while carrying him, you can’t jump as high or as far so, now and again, in order to solve the puzzles, you have to put him down. Except he won’t let you put him down just anywhere. He’s scared of the dark.

Give him a break, he’s only little.

While the graphics are superb, I have to say something about the sound in this game. The music is minimalistic, to say the least. Most of the sound throughout the game is of thunder and rain, and Big Bro’s feet splashing in puddles, or clanking on ladders as he climbs. There is music: a mixture of electronic and traditional instruments – pure string vying occasionally with brass – all managing to sound plaintive and poignant. I have to say, I liked the balance. The lack of music through most of the gameplay made the plight of the two lost brothers seem more immense, and, when it does come in, the music is heart-breaking.

Monochroma has been described as a cross between Ico and Limbo. I’ve not played Limbo, but I can see the similarity to Ico. It’s not so much the gameplay as the feeling of being lost in a vast, dangerous world and trying to find your way out. If, indeed, there is a way. Although there’s no dialogue, the love between the two characters; the gentleness of the older brother and the absolute trust the little brother has in him is truly heart-warming.

The story itself is simple and dark. It’s Handsel and Gretel. It’s Peter and the Wolf. It’s brotherhood, friendship and love. Big brother goes to hell and back to keep Lil’ brother safe, and to rescue him when he’s captured. He gives everything he has, risks life and limb, carries him across yawning spaces, up teetering towers, through massive, deadly machinery and, yes, even faces up to Mr Thug, and worse, to save his brother and get him home.

As always in life, and in games, nothing’s perfect. Some of the puzzles were frustrating because you sometimes have to position the character just so in order to succeed in a jump, or to catch a ledge. Sometimes you can drop a long way without dying and other times drop a few feet and it’s game over: there’s no way to tell if you will live or die until you try it.

However, there are plenty of checkpoints, so you don’t lose too much when you do die. Besides, you wouldn’t want it to be too easy, would you? Maybe it’s my PC, but there seemed to be a lag between a key-press and the reaction on screen, as well as laggy moments where the screen stuttered. I won’t blame the game, but just a warning to those with lower-powered PCs, as it did make timing the jumps a nightmare.

Overall, I loved this game. It took over my life for a while. In terms of capturing the imagination; the atmosphere, the gameplay and the beautiful relationship between the brothers, it’s awesome. I loved the haunting music, and the jazzy drum and bass which comes in whenever Mr. Thug’s around. I loved the backgrounds, the flickering sky, the splashes of red on Lil’ Bro’s goggles and Big Bro’s scarf. On the whole, I loved it. Oh. Did I already say that?

For those who enjoy non-violent, puzzle rich and moody games, this should be at the top of your list.