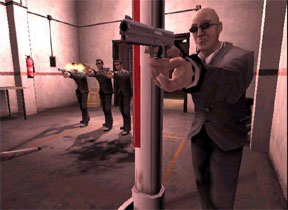 What is the difference between an idea of pure innovation and a gimmick? The game industry has seen many examples for each category, and in each case all sorts of games have used the popular component excessively afterwards. After the release of the immensely open-ended Grand Theft Auto 3 for example, games of all types were coming out with broad gameplay design, even in some cases where the design choice wasn’t exactly fitting (ahem Jak 2…).

So the lines between imagination and drivel can blur quite easily. Recently we have seen this develop within many sci-fi action games as the idea of giving playable characters psychic abilities has really taken off. One of the more recent games to use this unique feature is Second Sight from Codemasters and Free Radical – the same development house that brought the awesome Timesplitters games. Free Radical’s departure from the realm of FPS games has been successful. It’s quite evident as you play Second Sight that it is a competent horror/sci-fi title. However, the game doesn’t quite blow boundaries away like the Timesplitters titles did either.

The game throws you right into the action from the moment you hit "start." You awaken as a man in what appears to be some kind of research facility. Your skin is the color of death and you’re walking with a limp. You try as hard you can to remember anything that would give you a hint as to who you are and where you are…but nothing comes. Sneaking throughout the floor you woke up on you turn on a computer to find out your name is John Vattic. To discover anything else you must keep going.

The storyline as you can see has been done before in video games and movies, but nevertheless it is still engaging. The game plays out in a dual time fashion, as you’ll play through episodes of John Vattic months ago when he was still a healthy young man, and you’ll also play through episodes as the mess of a person he is now. As you go through the game drops enough hints for you to start piecing things together, but really all Free Radical is doing is teasing you with enough to keep you playing.

Sometimes though unfortunately the storyline will be all that’s keeping you going. On the surface, it sounds like Second Sight would be a blast to play. Combining stealth and action in a host of exotic levels including the streets of New York, Russia, and a Vermont Asylum is a great idea. In practice though, the medley of game styles have a few faults that make the game lose its impact. These small problems also make Second Sight feel like many of the other countless stealth action games out there out on the market.

One main problem that many people will have with the game is how annoying the control layout is. To make John Vattic do simple things such as lean out to peak around a wall can require holding down way too many buttons. Often times while you’re playing the first few levels of the game you will get confused as to what buttons you’re supposed to press and will get yourself killed as you scramble trying to remember which buttons do what.

When you do finally get a handle on the controls the game can be decently enjoyable. Most of the time Second Sight plays like many other stealth action titles, requiring you to sneak up behind your enemies and kill them silently by barraging you with an endless ocean of enemies should you just come in guns blazing.

The psychic abilities that John Vattic possesses are what keep Second Sight from feeling like another Syphon Filter. Vattic can pick up and throw things at his enemies with his mind, which as you can imagine does great things to confuse the enemy. He can also use an ability called Charm, which allows him to be invisible to guards. The ability however only works for a short amount of time and while you’ll be invisible to guards you won’t be to cameras.

To change things up while you’re sneaking around Second Sight will occasionally throw a puzzle or two your way. Mostly the puzzles are of the pull-the-switch breed but again the psychic ability aspect makes them seem fresher. Often John Vattic will have to figure out ways to do things with his mind that he can’t do physically.

Also, John will occasionally hack into computers that are nearby. Free Radical has made this part interesting by actually giving you a computer-like interface to go through in order to get map layouts, tamper with cameras, and even play some bare bones computer games. Early on in the game Free Radical uses a computer effectively to really keep the game’s darker tone. You go down a floor on an elevator and when you get to the floor the doors open to reveal a guard. Without really thinking you kill him, because he will likely cause trouble. When you get on the computer though you see that the guard was talking with his girlfriend, who is now typing frantically wondering what happened. Every time she begs for an answer from her lover it pulls your heartstrings, and for the rest of the game you really will analyze every move you make.

When you’re tired of sneaking around and solving puzzles Free Radical also gives the opportunity sometimes to just go into a level with the guns blazing. Given that the developer’s previous titles were pure shooters it’s not that surprising that this part of the game is a real adrenaline blast. The weapons you get to use in taking down your enemies are plentiful too, more so than in many other stealth action titles.

Where the game loses some of its appeal is the enemy AI. It simply is too unreliable, and that is a major fault when it comes to a stealth action title. Too often will you easily escape a full-on barrage of enemies after setting off the alarm, only to alert another one after the alarm has turned off when you’ve done nothing that should set the enemy off. In order for a stealth game to be really fun players need to know exactly what they can and can’t get away with, and when that continues to change, as is the case with Second Sight, than the game isn’t nearly as fun to play.

Graphics wise, Second Sight is above average. Though the game does have some problems with the physics engine (often times things will just keep moving without reason or items will get stuck in the wall) everything else is pretty solid. Characters have the same cartoonish looking faces as those found in the Timesplitters games, and just like the Timesplitters games the character’s emotions come out clear as day.

To complete the whole package is the audio. Second Sight has some truly haunting music, complete with electronic effects and sparse piano samples, which surely will get you inside John Vattic’s troubled mind. Sound effects are top notch as well, sounding realistic and fitting in every situation. The voice acting for the characters is usually well done, all though there are some lines that sound like they came from a high school play and not hired voice actors. Nevertheless, most of the voice actors do perform well, their work further immersing you in the game.

Second Sight at its core is a decent game, but it is unfortunately nothing really exceptional. Free Radical made a good attempt at spicing up the overwrought stealth game formula with psychic abilities and an intricately layered story, but they also allowed the game to have too many errors that other stealth action titles have shown in the past. Check this game out if you’re a fan of the stealth genre, otherwise you might just want to consider a rental.