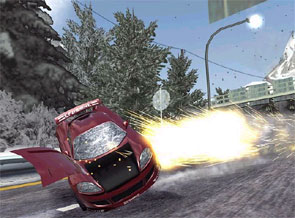 Once upon a time, some clever person dwelling in developer land decided that driving games needed to be turned on their head. They came to the logical conclusion that it is always more fun to crash a car than successfully navigate a course with dry eyeballs and aching hands. And thus Burnout was born. Cue choirs of angels and heavenly light breaking through clouds. EA has taken over this title from our dearly departed, Acclaim, waved its magic money wand and now presents us with Burnout 3: Takedown.

More choirs of angels and more heavenly light please because Burnout 3 gives us more of everything we’ve ever wanted. More crashes, more modes, more cars and more arcade fun. Burnout 3 is a model of arcade driving and anyone thinking of making a driving game should sit up and take note. This is fun concentrate – please dilute one part Burnout 3 to four parts water.

Watching someone else play Burnout 3 is a little daunting and scary. All of a sudden your friend has been transformed into a racing demon over night. You sit there thinking, I never knew their reflexes were so quick. Watch out for the…they swerved between the oncoming bus and the truck – but how!? Then you pick up the pad and all of a sudden it’s you swerving between traffic quickly and nimbly. It’s as if the force is strong with you and Darth Vader is your father. And I’m telling you now, it feels good.

World Tour is where you should head for some cross-continent action taking place in the USA, Europe and Asia. It’s your job to do some globe-trotting and cause some first class mayhem on the roads. Burnout 3 awards points for various styles of crash and a whole raft of trophies and rewards for racking up points. This makes progression through the game very fast and highly addictive as you open up new cars, tracks and most importantly new Crash Junctions.

Crash Junction is the stroke of genius that has proved to be the making of Burnout. This time around players can expect even more in the way of carnage. The levels offer more than one route to destruction and special bonuses to drive through. An instant explosion bonus allows you to detonate your car to involve more vehicles in your pile-up and with the multiplier bonuses you can clean up the gold medals. After a set amount of crashes the Crashbreaker ability kicks in, which allows you to detonate your car and the aftertouch means you can steer mid-air to place your car in a strategic position.

Beware the Heartbreaker though, which halves your score and can take you from the brink of victory to a dismally low score in the blink of an eye. Suffice to say, Crash Junction is still where it’s at and I’ve happily spent hours playing this mode and ignoring the rest of the game.

Multiplayer mode offers even more in the way of crash-tastic mayhem. Hook up with a friend for co-operative crashing in Team Crush – awesome. Also check out Double Versus Impact and Party Crash, which allows up to eight players to embark on more mid-town traffic shenanigans.

Online play is fun, and is kind of like a giant smash-up-derby. Even the "standard race" is anything but, a fact I was forcefully made aware. There I was on the starting line, fuel burning fast on an empty tank and all that. The race started and I was concentrating on keeping on the road. Suddenly I am bumped from behind, then again from the side. Within five seconds of getting the green flag, my car was a fire-filled burning heap on the side of the road." Guess these guys don’t play nice" was my first thought as my car respawned.

Armed with the rules of the road, I caught up with one of the other racers and nudged him just a bit as he was going around a corner at just the right time, sending him careening into a tanker truck filled with gasoline. Sometimes the light touch works best. I may not have won that race, but I did get sufficient revenge to make the game fun.

And that was just the standard race. There are also road rage modes where one team tries to run away for a certain number of miles and the other team tries to wreck them. Plus there are crash parties for those of you who like total destruction.

The one negative I will say about online play is that you can only use the cars that you have unlocked during the single player game. Personally, I think if you are playing online, everyone should be equal. Say you only want to play the game online, which by far is the best part of the game, then you should not be forced to go through the single player campaign just to get a couple of good cars.

EA has brought their signature touch to the proceedings in the shape of great presentation and a long list of fantastic rock music tracks. I was delighted and surprised to hear Franz Ferdinand and the likes of the Ordinary Boys rocking out of the speakers, plus 38 others. This was all accompanied by a radio DJ who cut in with vaguely amusing comments and traffic announcements, which usually went along the lines of great crashing to be had at the riverfront.

Music aside, the rest of the audio is top notch, offering you growling engines, the best metal crunches you’ve ever heard and even the swish of the lights as you race through a tunnel.

When it comes to graphics, Burnout 3 will take some beating. The PS2 has rarely seen a finer hour and I’d be interested to see how it looks on Xbox. Gorgeous, crisp city streets complete with trams, paper lanterns and neon signs give each continent a distinctive feel. But the best thing has to be the Fast and the Furious style blurring when you boost. At last, a game that realises the brilliance of that effect and Burnout 3 is the perfect place to exploit it.

All in all Burnout 3 is about as perfect an arcade racer as you could ever hope to play. My message to you all is to go out and buy it now. Stop reading this drivel and head to your nearest store. This game has so much packed into it, it could make at least two games I’d be happy to spend my hard earned cash on. Crash Junction alone is worth the price and is guaranteed to provide you with hours of fun. Yes, it is now an EA game and it might stick in my throat, but they’ve done a blooming good job and earned every glittering 4.5 GIN gem.