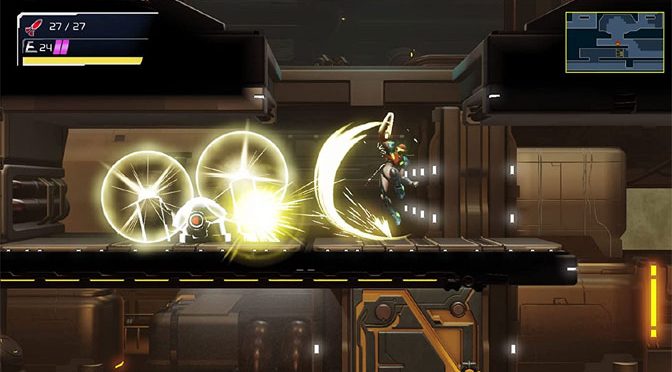 Metroid Fusion has been the last entry of the Metroid timeline for around 19 years. Each and every game made after it was either a prequel or a remake, and while Fusion was received well critically, lots of fans hated the fact that Samus had an AI that actively told her where to go and what to do. Fusion attempted to give the player a sense of horror in 2002 and used its narrative to great effect to do so. Samus, infected by a dangerous X Parasite at the beginning of its story, had parts of her Power Suit cut off of her so the Galactic Federation could inject her with a vaccine derived from the baby Metroid she discovered in Metroid II, who saved her in Super Metroid. Metroids, interestingly enough, are the largest predator of the X, and with newfound Metroid DNA flowing through her Samus discovers she’s the only one who can stop the X from infecting every organic being in the universe. Hunted by numerous SA-X that have all the powers she lost from her Power Suit, she eventually destroys both a space station and the home world of the X, ridding the universe of their threat forever… hopefully. 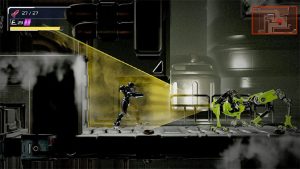 Dread takes place chronologically after Fusion, beginning with the Galactic Federation’s response to footage captured of an X Parasite on a planet called ZDR. The Federation made seven powerful robots, called EMMI, and sent them to ZDR to inspect for possible X Parasites only for the Federation to lose contact with them shortly thereafter. The only organic being in the universe who could investigate their disappearance is Samus Aran, due to her unique physiology and Metroid DNA. Shortly she reached ZDR, Samus was ambushed by an EMMI and discovers none of her current weaponry can work against it. Her only option is to escape the mechanical menace.

The planet of ZDR, where Dread takes place, is absolutely gorgeous and the level design of each zone is phenomenal. There are moments while exploring, such as where you will encounter a giant Chozo ruin in the background, and it’s difficult to not stop and take in the level of detail in a Nintendo Switch game. In regards to level design, Mercury Steam enjoys a claustrophobic, “No space wasted” approach for the areas you traverse, so many of the passages Samus must shoot and dash her way through are somewhat cramped, but all of Samus’s abilities come together to make passage through ZDR’s depths a joy. By the end of your adventure, you’ll feel like a dollar store speed runner with how you’ll speed boost through hallways, air dash over enemies’ heads, and slide into passages in order to backtrack and acquire new power ups. 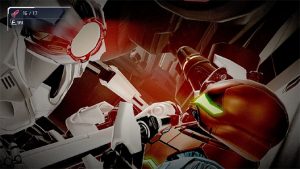 If there’s any one downside to MercurySteam’s approach to Metroid, however, it’s their extensive use of pitfall blocks and other one-way traps that can cause you to take a massive detour while trying to explore and use newly acquired abilities to get missile expansions and energy tanks. Until you get some very late game movement abilities, you might be unable to freely explore the map due to a fair number of dead ends and detours, so if you’re the type of player who likes to backtrack after every new power up, you may have your work cut out for you. The map is actually an excellent resource for the player in this regard, however, as it lets you place arrows for custom waypoints, and you can even select an obstacle type and see every single one of those obstacles in that zone, which is insanely useful for figuring out where to go organically. 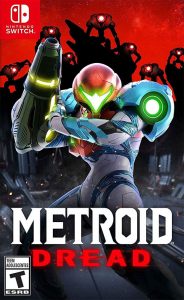 Metroid Dread is a game that takes multiple nods from Metroid Fusion- not only in that it directly continues the story of the famous bounty hunter, but in that it tries to directly instill in to the player a sense of fear like when you were forced to run from the much more powerful SA-X in Fusion. Rather than be obstacle courses or what amounted to playable cutscenes like the SA-X, Metroid Dread opts for a different approach to instill, ahem, dread in the player. The seemingly indestructible EMMI robots gate off specific territory of the map, are great at hearing your actions, and if they see you, will chase you relentlessly. This makes every time you need to cross an EMMI zone a stressful experience because the things just patrol around constantly. Thankfully, there are ways to deal with them, as finding the Other Brain located in the control core of each EMMI zone will give you a temporary power up that allows your arm cannon to destroy an EMMI (the control core mini boss looks like a Chozo AI, like Mother Brain from the original Metroid and Super, hence the nickname). Still, even if it’s a temporary power up, being able to destroy the indestructible Terminator-esque robot that was just chasing you is pretty cathartic. 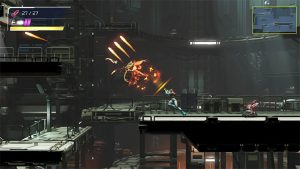 The EMMI zones form an interesting way to break up the pace by injecting some stressful stealth elements into the mix. Early on you acquire a cloaking ability which prevents the EMMI from tracking you, but in most instances, it’s actually easier and less stressful to simply run. There’s one particular section where you may feel the need to cloak, but just hauling space booty through the zone as quickly as possible typically will get you through without issue. If you fail to escape an EMMI and it touches you, you’re put into a cutscene where you have two chances to counter their attacks via a button prompt, and if you fail the small window to counter, you instantly die. Due to Dread having an instant-kill, the game is very lenient with its checkpoints, and will restart you right outside of the entrance to the EMMI zone so you never lose too much time. 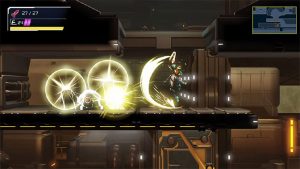 Thankfully, though, the controls are probably the area MercurySteam nailed down best: Even though you’re controlling Samus with the analog stick, your accuracy and control over Samus’s movement is always impeccable. To compensate for utilizing the analog stick, there are no single block width platforms like you would see in previous Metroid games, but you can wall jump into a grapple to pull yourself along a C-shaped hallway to escape an enemy quickly with relative ease. There may be some initial niggles, like difficulty in double tapping down to enter morph ball mode during more intense moments while running away from an EMMI… but in those cases, you can slide into morph ball by simply holding the slide button. The sheer volume of handy shortcuts to common Metroid actions that the player can utilize in the heat of moment is incredible, and part of why every single enemy in the game has damaging telegraphed attacks and then nails you to the wall if you can’t respond to their attack in time. Eventually, you’ll be clearing shinespark puzzles with ease, and crossing the map in record time with multiple jumps, flash steps, and more to give you an edge against the vicious creatures on ZDR.

Metroid Dread features full 360 degree aiming with the left analog stick, so you can freely aim up and down while moving, which is a great feature. A little odd that it doesn’t use the right analog stick, though that would have placed quite a reliance on the shoulder buttons, and after 100%ing the game on both normal and hard mode under 4 hours, the standard control scheme works great because it forces the player to do risk analysis in pelting a boss with missiles while it’s attacking. If you need to land multiple shots on airborne foes, you can plant yourself in place with a shoulder button and fire repeatedly until you need to move to avoid an attack. Dodging is probably one of the most important aspects to the game, even moreso than aiming, because enemies in Dread hit extremely hard. 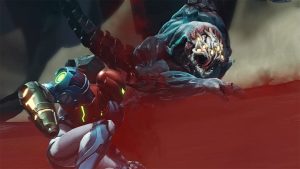 It’s not uncommon for later bosses to have attacks that deal multiple energy tanks of damage in one hit, and it’s obvious after the first few encounters that Metroid Dread aims for technical precision and skill in boss fights. Bosses have a particular movement pattern and tells that predicate their attacks, and it’s paramount the player learns how to get around these attacks, because it’s impossible to outright tank the hits while firing missiles like you could in Super Metroid. It’s normal to need more than one attempt at a boss in Dread- every single one of them killed me at least once, save a bug boss in the middle of the game that took five attempts, and the final boss who I didn’t lose to a single time, somehow. 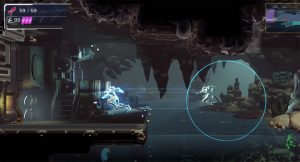 The controls and combat of Metroid Dread is simply on another level for most games in this series. Enemies like the X-infested Chozo soldiers will attack you with fast combos that you’ll need to avoid, and will even have attacks you can counter with the melee counter from Samus Returns, giving you big opportunities to deal solid damage. You’ll need to be able to utilize most of Samus’s movement abilities in the heat of combat in order to succeed, and sometimes unexpected tricks, like using the Speed Booster or Morph Ball Bombs, during a boss fight can yield unexpected results. Metroid Dread even rewards the player for sequence breaking, in several instances, outright letting you skip phases of boss fights in imaginative ways. Also, Storm Missiles and Flash Shift (the aforementioned dash ability) are probably the best power ups introduced to Metroid in quite some time, being useful both in exploration and in combat. 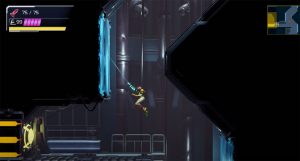 If there are any negatives to Dread, it’s probably that while the visuals of Metroid Dread are gorgeous, the music can be quite lacking at times. Either due to being mixed well below the sound effects, it’s difficult to remember many tracks from the game, though there are some delightful themes that play in specific visits of certain zones. There are a few great callback tracks that will play during some cutscenes, as well. The cutscenes in Dread are used sparingly to tell a story of two factions of Chozo, who largely have been largely absent from the series and sometimes depicted as almost deific enigmas because all you ever find are records they left behind. The cutscenes in Dread are fairly uncommon beyond some boss introductions, but the ones that are present are used to very great effect. 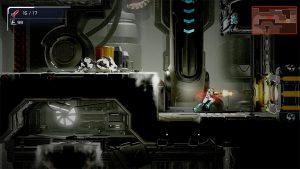 That being said, Metroid Dread is a phenomenal Metroid game. It has a lot of great design elements that Samus Returns on the 3DS simply couldn’t utilize because it was a remake of Metroid II. Dread returns to a narrative that was left off 19 years ago and closes it superbly, while introducing new story and gameplay elements that could serve as a building blocks for a future Metroid game. While Samus Returns was an enjoyable return to an old Metroid title, Metroid Dread surpasses it in most instances, with excellent movement, a great map, and phenomenal boss fights all conveyed through one badass bounty hunter. If you’ve been interested in Metroid, it might be easier to recommend an earlier entry first because Dread is not an easy game, but for those who want a great, challenging title that doesn’t overstay its welcome, Metroid Dread is an easy recommendation.