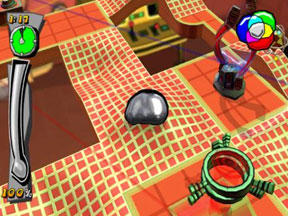 Puzzle games in which the level is controlled instead of the object have been hitting it big with the Wii lately, but not everyone gets it as right as, say, Marble Mania did. Case in point is Ignition Entertainment’s Mercury Meltdown Revolution.

This game was originally thought up for the PSP, and in the midst of their thinking, Ignition developers had hoped to create a game that was controlled by tilting the PSP itself in various directions, which would thus navigate the progression of the blob.

Unfortunately, thanks to the limitations of the PSP, this idea didn’t work out for them; however, the developers got a second shot at this control scheme with the coming of the Wii.

At first glance, this game seems very enjoyable. Lots of obstacles present themselves on every level. Mercury altering devices are laced throughout the gameplay. Innovative ideas utilize the Wii remote to a large extent.

With all these pluses, what could go wrong?

Well, there’s such a thing as too much, and I think it’s safe to say that Ignition packed in as much content as they possibly could into MMR, making it one of the most difficult games available for the Wii.

If you happen to be a hardcore puzzle gamer, this should bring a smile to your face.

And that’s just what can be found in the game.

Beyond the consecutive levels of MMR, the party games in this title are interesting little sidebars. Five in all, they tend to encompass an interesting need for games that can be played quickly and with friends.

To help you map out your strategy in various levels, ghost blobs and replay videos are made available both in and out of the game. There is also a playground level that will help you become familiar with several of the different objects in the game.

Some might think that all these things placed into one game is an advantage, and for a lot of gamers out there, MMR will keep their attention for a long, long time, but there is one fact that is going to knock the majority of gamers away from sticking with MMR: This game is tough.

Not for the weekend gamer, MMR will push your problem solving skills and your ability to control an object on a plane to their utmost. If a Wii remote ends up in the television while playing this game, it’s not an accident; it’s because the player has been pushed over the edge trying to guide his little ball of mercury over a thin path or into a paint shop for the ninetieth time.

True, if this is your market, then by all means go out and give MMR a go. It has some qualities that would make any puzzle player happy, but if you are just trying to find a quick play to take your mind off the rest of the world, I say pass.

There are other games out there to get lost in, and they are far less frustrating.