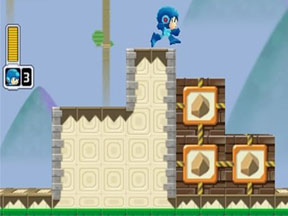 In 1987, my frustration level was pushed into the red by a game whose hero was a little blue man with a cannon fixed to his arm. The idea of Mega Man was great, the style was very catching, and the enemies were fun to destroy, but the difficulty is something that has always trumped me, even to this day. To complete a game on my own was a nearly unbeatable task, and soon I felt that I had found my downfall in this evil yet enticing game.

Now, the years have passed and new consoles have come into existence, and still Mega Man continues its reign on gamers all over the world. The latest incantation of this series comes to us on the PSP with Mega Man Powered Up, and though the title gives us nothing new to consider, it revisits the first Mega Man title with surprising accuracy and gives it a modern facelift.

As a nostalgic piece, Mega Man Powered Up is the bees knees (thanks Claire). The levels are remade and improved, but still follow the design of the first game down to the simplest detail. The enemies are reworked but bear strong resemblances to those that appear in the original levels.

Even the music is emulated in this amazing revisiting to the original game.

Aside from the remake of the original title, there are new Powered Up levels that have just as much to offer as the revision, which provides gamers with two games in one title, though the plots are remarkably similar to each other.

There are features to the new Powered Up levels, such as the difficulty settings, which changes the layout of the levels and the action of the enemies, making everything more or less aggressive to whatever type of gamer you happen to be.

For me, the easier settings brought with them a certain sense of joy that I had never experienced while playing Mega Man.

I felt like I was writing wrongs from my childhood and confronting elements that I had up to that point avoided (though I still bought the Mega Man Anniversary Collection when it came out on the PS2). Still, the more difficult option returned me to those frustrating moments, so the entire experience wasn’t completely cathartic.

As a bonus, you’re eventually allowed to take on the existing levels as Cutman or Gutsman, and each of these character’s abilities opens up new branches to every level.

Another feature that this title makes available is level building. Constructing your own gauntlet of bad guys and obstacles is fun for a while-and made even better with the online sharing capabilities-but not even close to what the game’s main challenge offers.

In sticking to the basics, this version of Mega Man provides a good gaming experience, but also decent progression. The voice acting and storyline remains interesting, but the characters for the new Powered Up version are often strangely stereotypical, sometimes offensively so.

Despite this setback, however, Mega Man Powered Up is a new face to a classic. Gameplay, graphics, audio: Everything has been enhanced and done with such care and effort that what Capcom has provided us is worth the trip down memory lane, and then some.