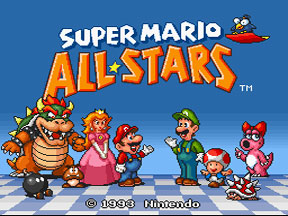 Super Mario All-Stars is one of those timeless classics that everyone knows. So of course Nintendo would re-release it for the Wii, and while they could have just given us the game, Nintendo decided to give a little love to its fans.

Super Mario All-Stars Limited Edition, as you may have guessed by the name, contains some extra goodies for the collector in all of us. Along with giving us nostalgia the package offers more.

Included in Super Mario All-Stars Limited Edition is a CD containing 20 tracks from Mario games for the last 25 years. The first 10 tracks on the CD are the main themes from various Mario games that have been released over the years. It’s nice to have all those songs from your gaming past and without a doubt there will be many people riding around in their cars blaring some of those classic Mario Bros. beats (I know I will be!). This is nice enough for me, but then we still have the other 10 tracks as well right?

Well prepare to deck out your cell phone with your favorite Mario sound effects because that is what the last 10 tracks are. All of the sound effects come from the original Super Mario Bros., which is exactly what I would always want. What more could you ask for than to have the coin collect noise play every time you get a text message or the 1-Up sound to play when you get a funny picture from your friend? Nothing more, it’s perfect.

Now Nintendo didn’t just stop with giving us some classical music and sound effects. Also included in Super Mario All-Stars Limited Edition is a booklet containing the history of the Mario Bros. series for the last 25 years. Inside this booklet are various sketches and concept arts from various different characters found in the Mario Series. It’s nice to see the original ideas for all of our favorite characters in the series, as well as some that didn’t make the cut. All through the booklet is commentary from three of the tops dogs at Nintendo, using their Mii personas just for fun. The first is of course the father of Super Mario Bros. himself Shigeru Miyamoto, the second is Takashi Tezuka, the General Manager of Nintendo’s Entertainment Analysis and Development Division Software Development Department (dang that’s a mouthful), and finally Koji Kondo the man who created the music for the Mario Bros. series. The comments from these three are very insightful as to what they were doing with the series at the time and the advancements that had been made over the last game in the series. It’s a nice little view into the history of the Mario series and cool of Nintendo to include in this collection.

Now onto the actual game! I’m sure just about everybody knows what Super Mario All-Stars is, but just in case let’s do an overview.

Of course this version is the same as the one released back on the Super NES so there aren’t any changes to gameplay or graphics. The major differences would just be what controller you choose to play it with. You can use the Wiimote, the Classic Controller or the Gamecube controller. Both the Wiimote and the Classic Controller give of the classic feel you’ll want when playing these games, but it was nice to add the Gamecube controller for those who may not like either of the former two.

I thought I should do some research to throw into perspective just how good of a deal this is. If you were to buy all of these games off of Nintendo’s Virutal Console it would cost you $21, now take into account that you get all the nice little goodies and that these are the enhanced remakes with the ability to save and you’ll see that you can really get your bang for your buck out of this collection, which I should mention is only $30!

My only real problem with this collection is that it is missing Super Mario World, but on the flipside I understand why. For those who don’t know, the version of Super Mario All-Stars that contained Super Mario World was never released in Japan, so it only makes sense that they wouldn’t include it in this version.

All in all this is a great collection, those who have played the games before will easily want to pick this game up if only for the nostalgia and if you’ve never played the original Super Mario Bros. (shame on you) then now is a perfect time to pick up this collection and see what you’ve been missing out on.

Super Mario All-Stars Limited Edition gets 4.5 GiN Gems out of 5.