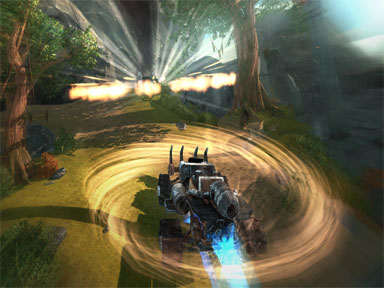 Crasher is an online battle arena game where teams of up to five players can battle up to five other players for technical superiority. The game offers a variety of vehicles to choose from with fifteen options in six different classes. You can play everything from a monster truck with specialized weapons to crush your opponents to a motorcycle type vehicle designed to repair other vehicles on your team.

Each vehicle has four special skills that can be used singly or in combination against other players. There are various terrains that make up the arena, which add an element of strategy to the game. It’s not like you’re pit fighting.

The game drops you into a vast area where you drive around and can use the terrain to your advantage to attack other players.

To attack, you target another player and firing commences without you having to hit any other buttons unless you want to unleash one of your vehicle’s special skills, which are mapped to the first four function keys. It was difficult to get used to not hitting a key to fire, but once I did, it was nice to be able to focus on the special skills, because that’s where the real action is.

The graphics in this game are nice, and although the hard driving soundtrack can get a bit repetitive, it suits the feel of the game.

Game play takes a bit of getting used to since navigation requires using the keypad W, A, S and D keys for direction. I’m more accustomed to using arrow keys and would have preferred to remap direction to those, but there wasn’t a way to do that.

The guide is very limited. It’s just a picture of the keyboard with the relevant keys highlighted and labeled with what they do. I can appreciate a basic guide, but that was a bit too simplistic. A short in-game tutorial would have been nice.

Basically, this is a fun game that I really enjoyed playing, when I got to play, which wasn’t often. I tried to play at all hours of the day on various days of the week and rarely found anyone to play with. When I did find someone, it was just one other person. I never got to play the five-on-five team play that I wanted.

I found it very frustrating that there was no way to play by myself on a team of NPCs. Since there is no way to play alone and no in-game tutorial, it is very difficult to build skills, so on the occasions when I was able to find someone to play with, I got my butt kicked.

Normally, I would recommend this game to anyone who likes mechanized combat games, but it’s hard to say it’s worth its price tag when it’s so hard to find someone to play with. My suggestion is if you want to try Crashers, get some friends to buy it too, so you’re assured of being able to play against someone. Should this little title catch on to the point where it has a nice following, it could be a pretty fun ride since it seems to have all the basics covered.