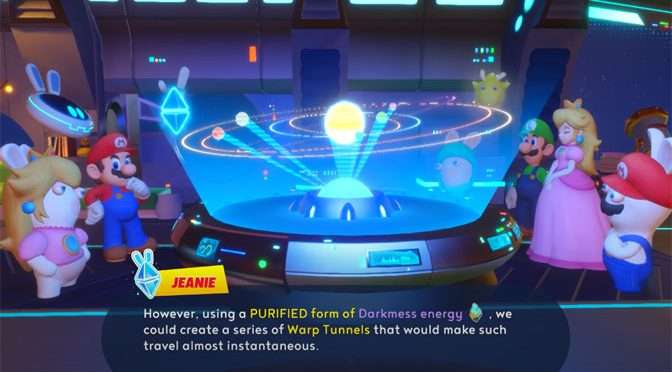 When Mario + Rabbids: Sparks of Hope was left on my desk with a sticky note that said, “please review,” I was concerned. This was not the sort of game that normally gets handed to me because I am in the old grouch stage of my gaming career. But I am glad that I picked it up. 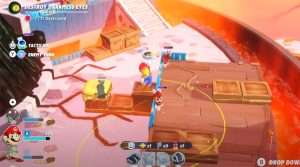 I will start by saying I did not play the original title and, thus, cannot compare the similarities and differences of these two titles. I can state with absolute certainty, however, that this is a deeply weird game. Not bad weird or funny weird, but kind of like bobsledding into the uncanny valley weird. There is something about the Rabbids that makes me feel really unsettled. I don’t know if it is the design, animation or what. Sometimes I don’t notice, and other times it’s like watching a sock puppet rendition of Invasion of the Body Snatchers or Mars Attacks.

Thankfully, there are no restrictions on who can be in your party, so it’s not just Rabbids. You can even have Mario join you if you want, which is a nice touch. 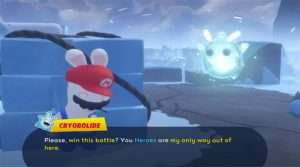 Additionally, the gameplay is pretty familiar as it is essentially “babies first XCOM.” In fact, any closer to XCOM and I am sure that Firaxis would be sending cease and desist letters to Nintendo and Ubisoft. Once I went through the tutorial and saw it was basically XCOM, I picked the hard difficulty when offered and just rolled through most of the game. Sparks of Hope might make for some challenging battles, but after playing XCOM 2 and dealing with Berserker King while a Chosen is skulking around, I can tell you that XCOM2 is much more difficult to deal with.

For anyone who has previously played XCOM, I recommend that you pick the hard mode in Sparks of Hope, or you will be disengaged. You can change the difficulty level on the fly and even reload battles on easier or harder difficulties if you want – so if you should get stuck, you can make things a little easier on yourself by doing this.

In addition to the turn-based combat found in XCOM type titles, Sparks of Hope is kind of like Monster Hunter in that you are placed in an open world zone on different planets to complete the story. 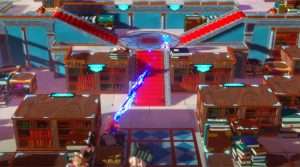 On each world, you will be tasked with doing quests, solving some light puzzles, talking with NPCs and generally playing the game like an RPG. It’s not a linear path, either. Some of the battles are even optional. And the game rewards players for exploring around and looking into every nook and cranny of the various worlds.

Tactically, the gameplay is solid, with different characters able to employ powers that are more or less helpful depending on the world and battles. 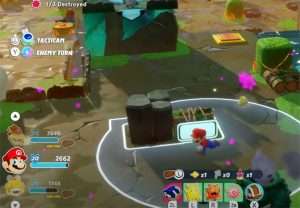 You can probably win every map with any character combination – but picking the best team for the job at hand will make things a lot easier. There are also team skills, like a jump, where one character can help another to reach a higher platform. All in all, it makes for a fun time and a way to approach tactical combat that is not too difficult for first time or less experienced players, or just those players who want to have a good time with this kind of game without getting too stressed about performing perfectly. 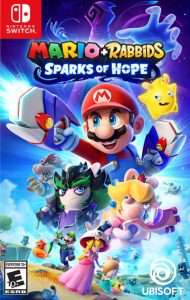 The one thing that Sparks of Hope could have taken from the XCOM series was the counterbalance of having something to do between all the combat. While XCOM battles were intense and draining, there was also the base-building mechanic that acted as a palate cleanser. It helped the game feel complete and let players unwind after a tense firefight. Mario doesn’t have that. It does have an overworld where you run around and collect some coins and solve puzzles, which are basically just picking up an object and placing it in the right size slot. But players always seem to be on the go in this game, and sometimes the battles can start to blur together and become tedious. 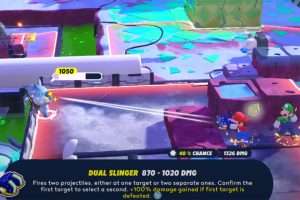 The story, such as it is, is typical run-of-the-mill Mario fare. It still strikes me as weird that his crossover game is with a side creature from a series that most gamers are too young to remember. My hot take is that the acceptance of Rabbids is why we have Minions now, and I will not change my mind. I’m not going to put spoilers in here, but it is essentially Mario and sock doppelgangers save space and time. It’s almost like H.G. Wells’ Time Machine – if while Wells wrote it, he had been high and beaten with socks full of quarters.

Mario + Rabbids: Sparks of Hope is a fun title, especially for those who are looking for a light tactical experience. It might also be a great way for parents to introduce their kids to tactical gameplay in a non-stressful experience using fun Mario and Nintendo characters.

Also, the deeply weird Rabbids haunt my dreams now. But that probably won’t happen to most players.