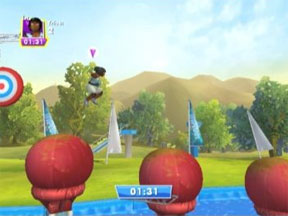 ABC’s Wipeout was a great show, when it was known as Takeshi’s Castle, a game show originated by Tokyo Broadcast Systems. I admit I never saw the TBS version, but I was a huge fan of the Americanized title Most Extreme Elimination Challenge (eventually known just as MXC.) MXC kept the original Japanese footage but added all new dialogue set more to the tone of an extreme sports show mixed with tons of pop culture references. It even resulted in some great inner games of trying to find out which member of the Babaganoosh family would make his/her appearance.

Wipeout however, is completely US based, but features a lot of the stunts used in Takeshi’s Castle/MXC. It tries to keep the same level of entertainment it had with MXC, but fails. The same can be said about the Wii game.

Wipeout: the game has up to four players with descriptive names such as "Most Likely to Succeed" competing against each other in events taken from the ABC show.

The game features two main modes: the first is a Challenge Mode where players navigate through single player obstacle courses. But the heart of the game comes in the "Play the Show" mode.

Play the Show is four parts. The first is The Qualifier, an obstacle course run to see who gets through the fastest time. Wiping out adds a 45 second penalty to the final time per section.

The Sweeper is round 2, an elimination round to see who can stand on the platform the longest while being hit by balls and the dreaded Sweeper.

Round 3 is the Road to the Final, where all four players compete simultaneously to reach the goal.

And the final segment of the show is the dreaded "Wipeout Zone," a "Dash to Death" style obstacle course to test all players skills. The winner is whoever has the fastest time when finishing the Wipeout Zone.

Control is done with the Wiimote and Nunchuck controller, but I dare say that control isn’t the optimal word here. The game feels very loose and slippery. Sure it might be done to emulate the wet conditions of the Wipeout courses, but it is still very difficult to control even on the Easy shows. Even jumping feels too floaty. When opponents are running the course, players can also use the Wiimote to throw tennis balls (or worse) in an attempt to knock them out.

Needless to say the game is pretty shallow, even with so many events available, it still does not have much to really enjoy. There is some funny commentary done by the show hosts, John Anderson and John Henson, as well as sideline reporter Jill Wagner.

Sad to say however, that the John Henson who was hilarious in his days of Talk Soup (check out the Hunger Strike skit he did with Dustin Hoffman and Jon Lovitz to see what I mean) is not present in the game. If it was, it might have been a bit more entertaining.

Still, that can’t be as bad as this game looks. The character models are very basic, but that’s not what gets me. It’s how the game slows to a crawl for no reason whatsoever. Sure this game is on the Wii (as the controls fit the standard Wii formula) but why does a game so basic have to slow down so much?

Still I know there are fans of this show, and they are willing to pay the $30 to play it. I however am not a fan and will be going back to watching my DVDs of all the MXC seasons, and take a drink every time Vic Romano responds with a very snarky "Right you are, Ken!"

CONS: Very shallow gameplay. Non-responsive controls. Sub par graphics and terrible frame rate. Based on a show that was done much better on other networks.