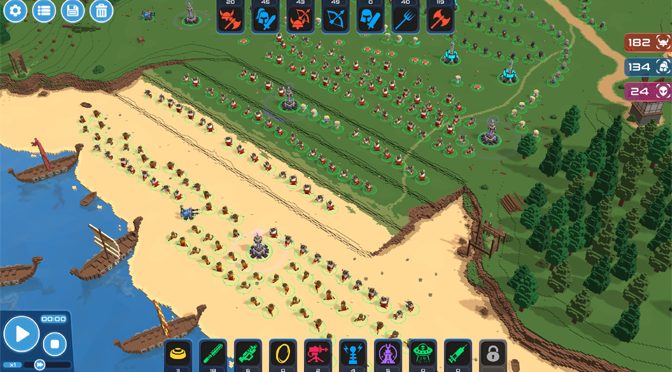 Have you ever wanted to play as aliens and control various opposing forces in various conflicts throughout time? How do you feel about interfering with those battles by inserting aliens with blasters and teleporters to bring the opposing forces to heel? Well, if this was ever a fantasy you held, Make War luckily has you covered on that front. Is it any good at allowing you to interfere in sandbox versions of battles? Let’s find out. 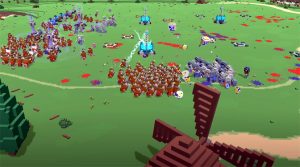 In Make War, as with many strategy games, you play the role of the omniscient, all-powerful cursor, clicking on items from a hot bar at the bottom of the screen and planting things where you want them. There’s an assortment of levels, typically featuring two opposing forces you’re to interfere with and swing the battle in specific ways. To avoid being too vague: You’re given a list of tasks such as, “Make X force win by a margin of Y units” or, “Kill X units after affecting them with a specific object.” The game itself actually plays out in real time, though you can pause and reset repeatedly to complete the tasks given to you in the normal scenario mode. There’s also a sandbox mode that lets you just plant what you want, when you want. 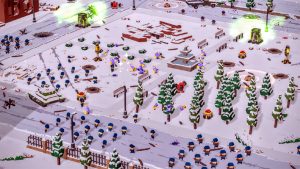 After clicking the play button and letting the forces ram into the battlefield until they annihilate one another, Make War plays very similarly to every other battle simulator game on PC. The goals you have to complete differentiate what units you need to deploy to complete the task, which unlocks new units you can place to complete other tasks. There are nine maps per location in the game, each location featuring different composition of enemy forces and tasks for you to complete, and completing 5 maps will unlock the next location for you to play. What helps mix things up a bit is that different locations will have different units for you to use, so the battle of Stalingrad location will allow you to use dynamite or beast aliens to tear through opposing forces, while the Anglo-Saxons vs Vikings location allows you to use mines and Tesla coils, for example. There are 10 units/items you can use per map, and making the most out of them is how you have fun completing tasks or playing around in the sandbox mode. 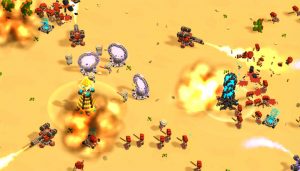 Visually, Make War isn’t a whole lot to look at- the characters are simple, cute, and clean, but most of the time you’ll be zoomed out so you won’t really be able to appreciate how clean most objects are (you can zoom, but it only makes placing units more of a hassle). You should mostly be able to understand what everything is, however. There’s the preparation music that plays while the action is paused and you’re placing units, and a battle theme that differs by location- the soundtrack isn’t bad, just fairly repetitive as you’ll hear the same two tracks for 30 or 40 minutes at a time. 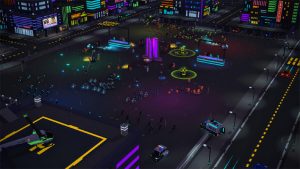 There are some obvious areas that are lacking in polish in Make War, however. The translation of the text is poor, with statements like, “Press A button to a mine” or, “Try rotate the camera” being present in the tutorial. The interface was clearly designed for mouse and keyboard- selections are done by using your joystick to control a mouse cursor on screen, which has never been ideal in almost any circumstance. You’ll slowly drag the cursor to the bottom of the screen, select a unit you’d like to place, and then slowly drag it to wherever you’d like it to be placed on the battlefield.

Overall, Make War is almost like a puzzle strategy game- an odd mix that is rarely seen. The puzzle aspect of completing tasks to unlock more units with which you can use to devastate increasing enemy forces is oddly fun and addictive. The game does, however, lack a significant amount of polish with broken English being one of the first things a new player would see when starting up the game for the first time, and the control scheme is less than ideal and slows down the experience substantially. 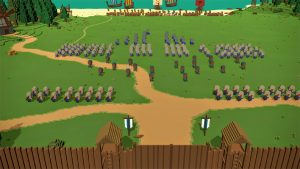 In total, Make War is a $10 budget title with a decent chunk of content, a rewards based progression system, and a sandbox mode to play around in later. There are, certainly, better real-time strategy or puzzle games you can play on Switch, such as Northgard, Bad North, etc., but if you’re willing to overlook the nonexistent story and lack of polish for a game that is essentially Epic Battle Simulator logic puzzles, Make War could be fun for a few hours at a low cost. This would definitely be one to watch a video or two of before purchasing, because what you see is basically all you get.